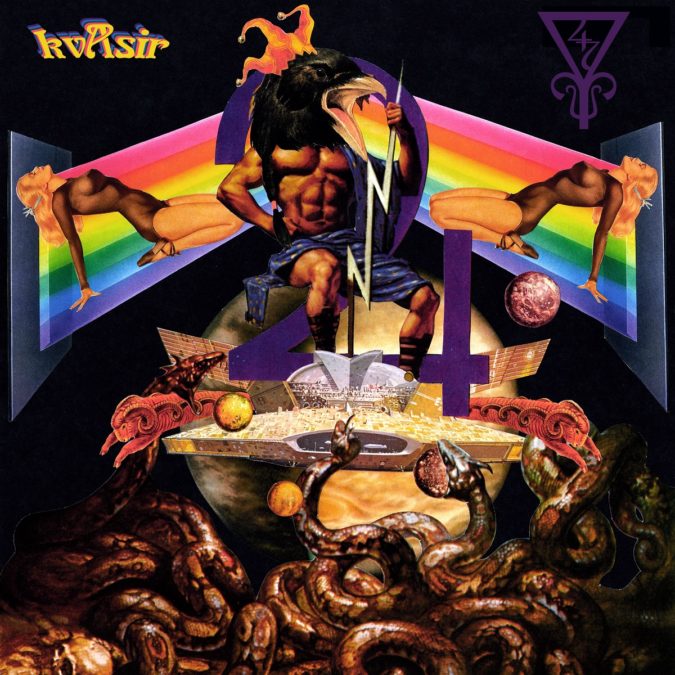 Kvasir, the being of Norse mythology, was born from the saliva of the god clans Aesir (war) and Vanir (fertility) after they collectively spit berries into a mash. Kvasir traveled far and wide teaching and spreading his knowledge until the dwarfs Fjalar and Galar killed him and drained his blood. Their mixing his blood with honey resulted in the Mead of Poetry, said to imbue the drinker with poetic prowess and wisdom, the spread of which eventually introduces poetry to mankind.

Kvasir, the band, hails from North Portland, Oregon, and is the heavy rock and occult doom sum of Christopher Lee (vocals, guitar), Greg Traw (bass), Jay Erbe (drums), and Gabriel Langston (guitar). Originating as a trio formed by Lee and Traw some years prior, they released a debut EP, ‘Space’, in April 2018, with a second EP ‘The Hanged Man & The Emperor’ out only a few months later in September.

As a four-piece with Langston and Erbe, Kvasir steadily grew a reverential following in their local Portland scene during 2019, then branching out on pre-pandemic tours of the Pacific Northwest. Remaining productive in 2020, they released the ‘I And Thou‘ single in June and completed recording their debut full-length.

That record, entitled ‘4‘, was released this week through Glory Or Death Records (on June 28, 2021). With all artwork by Greg Traw, the album was engineered and produced by Jesse Payne at Low Shelf Recording, then mastered for digital by Justin Longerbeam, with vinyl mastering by Tony Reed at HeavyHead Recording Co.

Blending a melodic palate with technical appetites, Kvasir’s distinctive brand of Sabbath worship is tinged in traditional metal with elements of funk, jazz, and art composition. Incorporating progressive elements into a classic foundation lets the songcraft both tell a story and fully rip.

At its heart, Kvasir is a heavy rock band. Sounds simple, right? But somehow, just like mixing blood with honey, the result is more than the sum of its parts.

The new ‘4‘ album is available on vinyl LP (random color vinyl) and digital download or streaming. You can order a copy now either directly from Kvasir on Bandcamp or via Glory Or Death Records: