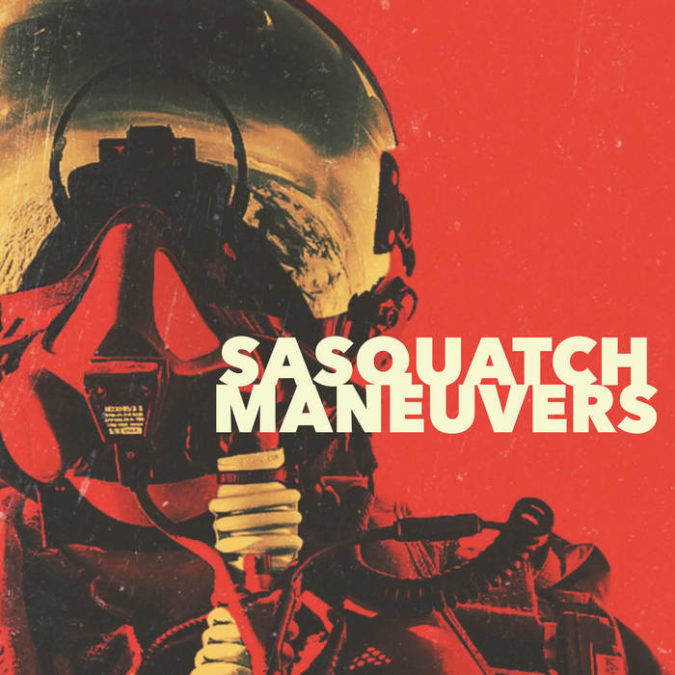 June 2017 brought us a new release ‘Maneuvers‘ , from those heavy lunatics of the forest, Sasquatch. Today brings us an open conversation with guest contributor John Gist, where the three gents discussed their new tunes, crew, and plans, along with a barrel full of random fun. ~Leanne

‘Maneuvers‘ released via Mad Oak Records on June 20th, and is album five from Sasquatch.  With it comes new sounds, a full European tour, more goals, and a bucket of name shouts for their own current favorite new music listenings. Stream the new album in full below and read on for the interview and tour dates, then go snap up that new record for yourselves! Links to digital, cd, or vinyl press formats, as well as merch, are available for purchase from the Sasquatch store.

JOHN G.: What’s up guys? Thanks so much for taking time in your crazy world to talk with me today! Well, it’s been pretty quiet until recently concerning you all. I was fortunate enough to be able to pop over to Palm Springs and catch your show with House of Broken Promises last year. It was great to finally meet Jason and Keith, along with seeing Craig again (I met him at the San Diego Kind show).

Speaking of that show, two questions. How did you guys link up with Arthur Seay and House of Broken Promises?

KEITH:  We have been friends with those guys for a long time; played a lot of shows together and did some touring. When Arthur asks us to do a show out in the desert, we are always up for it. He asked us to play with UNIDA a few years back, before they went on tour and we had a blast that night in Palm Desert. HOBP has new record coming out soon and are doing shows in Europe this fall. Great band, great dudes!

JOHN G.:  And how did Craig Riggs of Roadsaw and Kind get involved with Sasquatch?

KEITH:  Riggs owned the studio which has now become Mad Oak. Scott from Small Stone sent us out to Boston to record there, and Riggs and I hit it off immediately. We have been good friends ever since. When Rick couldn’t do the touring anymore, Riggs was first in line. We are lucky to have him!

RIGGS:  Yep, still in Boston, but does commutes to work for the band.

JOHN G.:  Speaking of Boston, what’s up with Roadsaw? Didn’t I see that you all are working on a new album also?

RIGGS:  Yes, absolutely. We aren’t that far from finishing. Songs are done and finished, and now working on overdubs and mix.

JOHN G.:   The new album ‘Maneuvers’ just dropped on June 20th. Anticipation has been building, as many are looking forward to getting their dose of Sasquatch. I got to crank it the other day… and wow, this is an album of the year candidate right now on my list. Care to elaborate some on the album? Tell us a little about to what to expect on the new album, for people who haven’t listened to it yet?

KEITH:  You know, I feel we stripped it down some. Much less extended jamming and more straightforward, rocking tunes. I would be totally upset if our fans didn’t dig it.

JASON:  Almost all songs are less than four minutes, still a couple more on there a few more minutes.

RIGGS:  I feel like these tunes are songs, they have hooks and they rock. I am so proud of this album.

JOHN G.:  I have always felt much of your stuff would be played on the mainstream rock stations if we were in a different era.

KEITH:  This is my favorite album we have done. I just think it’s really catchy, rocking songs. Our fans are going to love it, I think.

KEITH:  John, WWZD*? No, seriously we just figured it was time and the word “maneuvers” describes exactly what was happening in the band right now, and the last few years, since our last release. [*What Would Zappa Do]

JOHN G.:  What label are you currently on, nowadays?

JASON:  We are with Mad Oak Records, which is owned by Craig Riggs. Also, we put out our 7-inch single for ‘Rational Woman’ on Red Sun Records.

JOHN G.:  Why the change from Small Stone?

KEITH:  We have the resources, so we decided to put it out ourselves this time.

JOHN G.:  I also saw you guys are involved with ‘The Wall Redux’. What song will it be and how did you all get set up for this fantastic project?

KEITH:  We will be doing “Another Brick In The Wall“, which is going to be very interesting. We have a few ideas about how to go about it, but nothing set in stone as of yet. Magnetic Eye contacted us about doing a song, so we jumped at the chance to do it. Everyone in the band loves Pink Floyd. Lots of great bands are a part of this, too.

JOHN G.:   So, you guys are headed to Europe for a tour. When is the last time you headed over there? Which is each of your favorite countries you have played before, and why?

KEITH:  We toured Europe in March/April of 16′ for about five weeks. Me, personally, I loved Spain and Greece. It just felt like being home in an odd way. People were great, food was great, wine was excellent. But the most wild thing we saw was in France… some dude was so wasted, he was pissing in the lobby of the hotel. He thought he was in his room. I think I might have it recorded and I can send it to you.

JOHN G.:  I know you all must be fired up about playing Psycho Las Vegas this year! What bands are you looking forward to seeing?

KEITH: I, personally want to see King Diamond. I’ve been a fan since I was a teenager.

JASON:  There are more than a couple!! Too hard to shrink down the list as there are 20-30 bands I’m really interested in checking out. Top 3 that I have never seen before would be:  Magma, Chelsea Wolfe, and the King. Special mention goes out to Royal Thunder, who I just saw a couple of weeks ago and they blew me away!

RIGGS:  Feels like things are very steady right now, with lots of good bands out there.

JOHN G.:  What stuff that is being put out nowadays are you digging?

KEITH:  I just rely on Jason to fill me in (laughs).

RIGGS: Totally digging King Bison, they are awesome. Been totally loving Beastmaker. Have you heard of Mutoid Man?

JOHN G.:  Sure, have they are actually coming to Vegas in less than a month!

RIGGS:  Yes, for sure.  We have a lot of good bands up there!

JASON:  Recently saw All Them Witches and I totally like them!! Also, been getting into new Afghan Whigs.

KEITH:  Actually, I really like the new Mastodon and the most recent Lo-Pan.

RIGGS:  Kyuss.  We all feel that was such a big part of things for each of us. Just so good and different back then. Mudhoney was a hugely impactful band for me. ZZ Top, and of course, I grew up with the Beatles since I was a tiny little kid.

KEITH:  Jason introduced me to Barkmarket, and that’s some good stuff.

JOHN G.:  I seem to think I might have seen Failure open up for Tool a few years back on one of their mini tours Tool does once in a while out west.

RIGGS:  A friend of mine saw Tool recently and Maynard was in a full body armored suit, just hanging out by the drums.

JOHN G.:  Never know what’s happening with him in a live show!

KEITH: My faves are, besides Soundgarden, would be Led Zeppelin, Black Sabbath, and Kiss. I know they were big to Jason, also.

RIGGS:  Well, that is where we don’t agree (laughs).

JOHN G.: How did each of you get into music?

JASON:  My first two albums were ‘Kiss Alive’ and the single ‘Another One Bites the Dust’, by Queen. I got into metal early, like in eighth grade, growing up outside of Chicago (Joliet). After I saw ‘Cliff ‘em All’, I had to buy a bass!

RIGGS:  Well, I am just little older than these guys (laughs). Growing up in Philly, it’s such a good rock town! My family was so into music. Each Christmas, we would get a Beatles album. We would all be so into it. Heck, my first concert was George Harrison, when I was four!

JOHN G.: Wow that’s a really cool early age to hit a show! When did you start playing?

RIGGS:  A friend of mine in the neighborhood had a drum set in his garage and I would come over to watch him play. One day he gave me a bandana and said, “As long as you wear this bandana, you can come over and play on my drums.” I have been playing ever since.

KEITH:  My cool Uncle Jimmy got me going. He was a type of dude from the 70’s/early 80s, with a kick ass room with posters all over the walls. He has this monster sized Rush poster. I just really got into rock and roll early, around six. Started playing around seven or eight. First album my Mom bought me was Black Sabbath’s ‘Sabotage’ album. I was in a lot of bands when younger, playing at house parties… wherever.

JOHN G.: I have to tell you that I think you have one of the best rock and roll voices out there.

KEITH:  Thanks so much. I really do appreciate that! You know, I never wanted to sing, but I got tired of guys in my bands not able to do certain things vocally, so I just decided to try for myself.

JOHN G.: Last random question… Most embarrassing band that fans might be shocked to hear you like or liked in the past?

RIGGS: Almost anything Danger Mouse is involved with and Kendrick Lamar (laughs).

KEITH:  Len…  “Steal my Sunshine”.  Reminds me of summertime.

JOHN G.:  Hey guys, I know you need to get back to rehearsal, but again I want to thank you all so much for spending some time with me today and letting us get inside those heads of yours!

The album is really an outstanding album, and for me, propels itself to the top album of the year, so far. It has some really different and dynamic aspects to it, such as some organ/keys in there, while still having the foundation of crushing riffs, killer vocals, and some of Jason’s best work on bass. Craig Riggs on drums provides a new feel and works so well with you (Keith) and Jason. It’s like you have been playing together for years!

SASQUATCH: Thanks so much. We look forward to getting out there and playing the new stuff and hearing some cool feedback from everyone!