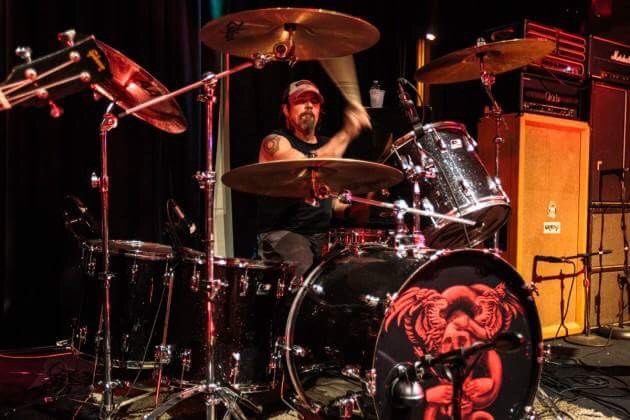 FOUR ON THE FLOOR – THE DRUMMER’S SPOTLIGHT #1:  BRIAN COSTANTINO

Brian Costantino knows a thing or two about stoner rock and doom metal. For years, this powerhouse drummer and resident skinsman for doom legends The Obsessed has built a solid foundation for frontman Scott “Wino” Weinrich since his days with The Hidden Hand. His most recent work with The Obsessed on their latest album ‘Sacred‘ (read about it) demonstrates what a lot of drummers within the stoner rock genre fail to achieve… versatility.

Each one of the songs on ‘Sacred‘ gives out a totally different vibe for the listener. A chore not so easily attained, especially within the doom metal sound. This type of drummer is near and dear to my heart and I’m truly honored that I was able to sit down with Brian (via email anyways) and have him share a few of his thoughts on his gear, his influences, and his drumming.  Hope you dig!

Riff Relevant [Brendan]: When was the exact moment you realized you wanted to play the drums? Who was your primary influence at that moment?

BRIAN: Back in the early ’80s, I grew up a block from Ed Gulli, The Obsessed drummer on the S/T Purple album, and we were good friends. When he started playing for them, he asked me to tech for him… which was odd, because I didn’t know how to play drums, much less how to set them up.

He said “no big deal I’ll teach you”, so he gave me the basics and it went from there. I still really didn’t play then, but he had given me enough knowledge to learn, so I bought a kit and practiced like crazy. Never took lessons, so just went off the things he had told me and worked at it.

Would have to say at the time, Ed was my primary influence.

Riff Relevant [Brendan]: Which one of your songs best exemplifies you as a drummer?

BRIAN: That’s a tough question. Hard to say. On the latest Obsessed release, it would have to be ‘On So Long‘. It is one of those songs with a lot of tempo changes and dynamics. I’ve played in a lot of different style bands, from blues to Speed Metal, which helped a lot in that aspect.

BRIAN:  No. I love my Ludwigs I’m playing now and know the sound I can get from them.

BRIAN: Not too much. I like to find a place away from a lot of people, go over the set in my head and warm up just before we go on.

BRIAN: First of all, you have to love the music you are playing. The Obsessed personally is my all-time favorite band, so that makes it easy to get stoked about going on, knowing I get to play Wino’s songs every night.

Riff Relevant [Brendan]: What do you think gives your playing its signature sound?

BRIAN: Not sure, maybe it’s the fact that I haven’t taken a lesson and I just play what I feel and let it go.

Riff Relevant [Brendan]: Any brand loyalty? Are you partial to one drum company over another? Any current sponsorships or your own signature gear?

BRIAN:  Like I said I love Ludwig drums. I own a Pearl and a Tama set, but they just don’t seem to match it, so yeah Ludwig I’d say.

I do have a stick endorsement with Peridore Custom Sticks. I was turned onto them by Henry Vasquez of St. Vitus, and I have to say they are the most durable sticks I have ever played and the feel is killer. I would recommend them to any drummer.

Riff Relevant [Brendan]: What’s the most important piece of equipment currently in your live setup?

BRIAN:  I’d say my bass drum. It was built by my brother, Pat Tinney, and the sound of it – mic’d or not – is incredible.

Riff Relevant [Brendan]: What do you enjoy doing outside of music, that you feel ultimately contributes to your musicality? For example, a hobby that you turn to in order to stimulate your creativity.

BRIAN:  I learned how to do Stained Glass a couple of years ago, so when I get the time, I love doing that. Put a set of headphones on, turn them up and roll.

Riff Relevant [Brendan]: Are there any newly emerging artists that are currently influencing you?

BRIAN:  Not really at this point. Between learning and playing the stuff from Wino’s catalog and working on new tunes, really don’t have time for it.

BRIAN:  I’d say the obvious is to practice as much as possible. Even an hour a day, and don’t feel like you can’t improve, because you always can. Watch other drummers. I do that every night on tour to study their technique.

BRIAN:  Bonham for sure.

1 thought on “FOUR ON THE FLOOR #1: Brian Costantino of THE OBSESSED [Brendan Burns’ Drummer Spotlight]”