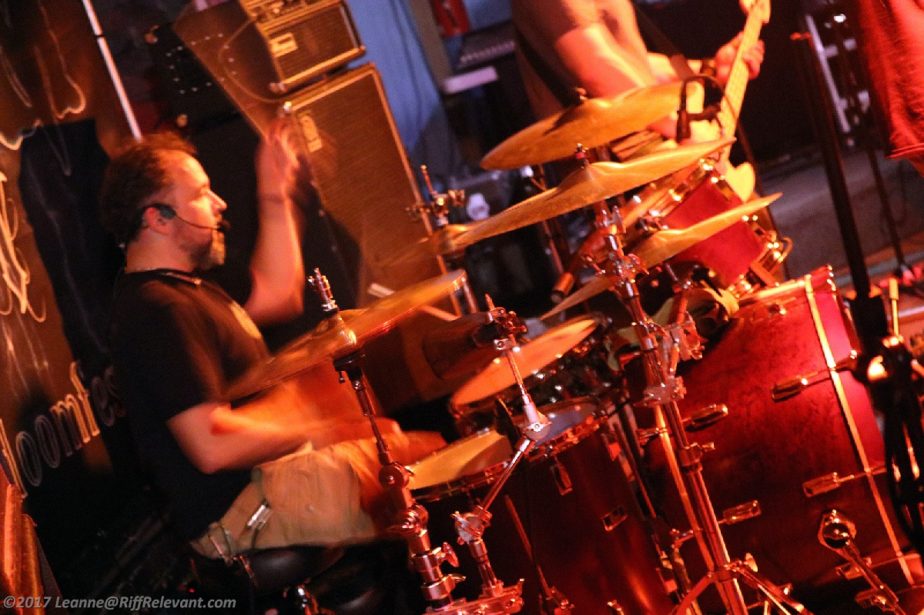 FOUR ON THE FLOOR – THE DRUMMER’S SPOTLIGHT #2: MICHAEL WALTER

Michael Walter may be a name many drummers in the stoner rock genre recognize. For well over 10 years, Michael has been the driving force in the Dallas-Fort Worth, Texas riff-mongering giants Wo Fat. Listen to any one of their albums and it’s no wonder why these guys lure rock fans from around the world.

Michael’s approach and style to the drums are very reminiscent of the old school greats of years past, drummers like Jim Keltner and even Hendrix’s drummer Mitch Mitchell. Drummers who brought an innovative methodology to their playing and the songwriting itself.

I was very fortunate to share the stage with Wo Fat, last year in their hometown and was especially stoked to witness Michael play the songs that I’ve been listening to for years. There’s a very distinctive style to the way Michael plays, almost as if he’s in his own world and not even listening to the other players, yet every note and lick is exactly in the right spot. It’s really quite impressive, but then again… Wo Fat is really quite impressive.

I recently sat down with Michael and got to pick his brain a little more, here’s what he had to say. Hope you dig!  —Brendan

Riff Relevant [Brendan]:  When was the exact moment you realized you wanted to play the drums? Who was your primary influence at that moment?

MICHAEL: At first, playing percussion just seemed more fun than piano, which I had been taking for a couple of years. My sixth-grade band director was a really fine percussionist and led our award-winning high school percussion ensemble called “The Boys in Black.” He took me to see a concert, and man oh man… to me these were the most rock-star dudes on the planet!

They wore all black and the concert was very dramatic and hard-core. And whether they were playing drum set, marimba, or tympani, temple blocks, crotales, or a single triangle note – every one of them let the audience know that what they were contributing was THE reason for existing! So, right then and there, I was “I want to be in front of people being a total musical bad-ass.”

Riff Relevant [Brendan]: Which one of your songs best exemplifies you as a drummer?

MICHAEL:   I guess the first song that comes to mind is a song called ‘Hurt at Gone‘ from The Black Code. The songs I write for Wo Fat tend to be more groove-based than riff-based – ‘Beggar’s Bargain‘ off of The Conjuring, and off the last album the middle 12/8 jam section of ‘3 Minutes‘ and the funk of ‘Le Dilleme.’ I write tunes that I like to hear and that I like to play as a drummer.

Riff Relevant [Brendan]: Is there specific gear you prefer to use in the studio that would be different from your live set up?

MICHAEL: Not really, as far as my kit. I definitely use more percussion in our studio recordings than live – Latin percussion, hand percussion, marching and orchestral percussion.

One song of ours ‘Slow Blade,’ has a section that sounds like a New Orléans parade drumline. I overdubbed a bunch of different snares and a big open orchestral bass drum. It was a swampy voodoo jam!

‘Noche del Chupacabra‘ was the beginning of incorporating Afro-Cuban percussion and rhythms – something we still aspire to do in our songs. It’s very natural for Wo Fat, because everything we do is rooted in the blues, and the blues are rooted in African music.

MICHAEL:  I just try to get a few moments of peace – to become centered and focus my breath. Then I’ll do this wild flailing of my arms, something I learned from watching Michael Phelps and other Olympic swimmers. They do this and then slap their arm muscles.

Nothing that I’ve found warms my muscles faster and more completely than doing this! When Zack Busby, our bass player, first saw me doing it, he was like “Dude, what the fuck are you doing?”.

Riff Relevant [Brendan]: How do you keep things interesting every night while playing the same set night after night on tour?

MICHAEL:  I get easily bored. I can’t play the same fills, the same rote way every night. The great thing about Wo Fat is that most songs have sections with a heavy amount of jamming and improvisation. Some of my favorite bands are full of musicians who can jam and feed off of other player’s motifs and ideas. This is a tradition of the earliest blues and jazz of the last century and far before that.

I’m fortunate to be playing with two great musicians, Zack and Kent, who each have such an amazing command of his instrument and a thorough knowledge of music. There are definitely times when the music demands that you play it straight ahead and just rock as heavy as the gods will allow, of course. But in the end, the most crushingly heavy music derives its heaviness by providing contrast – tension and release.

MICHAEL:  I don’t know if I have a signature sound like say, Stewart Copeland or Mitch Mitchell or Elvin Jones. I guess one thing I’ve noticed, is that I tend to ‘swing’ even when we are playing straight ahead rock and roll.

To play heavy on the upbeat or off beats – like Mitch Mitchell, or like a jazz drummer – heavy on 2 and 4, rather than like a traditional rock approach, where the emphasis is on 1 and 3 – like Phil Rudd or Bonham. It’s slight, but it’s there in my playing.

RIFF RELEVANT – BRENDAN:  Any brand loyalty?  Are you partial to one drum company over another? Any current sponsorships or your own signature gear?

MICHAEL:  I use what sounds good to me and works best. I’m partial to K. Zildjians. DW‘s are amazing drums, especially before 2000 or so. I play Vic Firth 2B sticks, because of quality control and they’re not lacquered. I use Remo heads exclusively, except for an occasional Ludwig. In my opinion, there is no better snare than the Ludwig 6.5” deep Supraphonic, although my Tama Kenny Aronoff Trackmaster is a monster.

Honestly, if I was offered a drum endorsement deal, I might turn it down. There are so many great drums out there, why limit yourself to one brand? Now, if Vic Firth, Zildjian or Remo were to give me a call… that’s different. That’s where 90% of my drum budget goes.

I do endorse a great product called RimShot-Locs. If your snare drum tension rods loosen when you play, these lock them down tight. (Video below.)

Another company that has used my endorsement on their website, and supported me with product, is Gauger Percussion, or GTI, with the flex-frame. If you use a rack tom mounted on a snare stand and you don’t isolate your shell with the flex-frame, then your drum’s tone is completely choked. I love very open and well-tuned, resonant drums.  Check them out.

Riff Relevant [Brendan]: What’s the most important piece of equipment currently in your live setup?

MICHAEL:  Probably my pedal, a Tama Speedcobra with a Trick aluminum beater. Kick pedals are personal because you dial in your own feel.

If we fly out to do a one-off somewhere, my pedal goes with me. If I can, I’ll also take my Supra or the Trackmaster and my extra set of hats.

Riff Relevant [Brendan]: What do you enjoy doing outside of music, that you feel ultimately contributes to your musicality? For example, a hobby that you turn to in order to stimulate your creativity.

MICHAEL:  I don’t need a stimulating hobby, I have kids! Seriously, my family is huge in my life. Lately, I’ve been going to the gym with my 15-year old, who is trying to bulk up for baseball.

I just turned 50, so if I want to keep doing this I have to keep my core strong and my stamina up. I plan to keep on doing this for a long time to come. Other than that, I can drum-nerd out all day long, Brendan.

Riff Relevant [Brendan]:  Are there any newly emerging artists that are currently influencing you?

MICHAEL:  I don’t know about new – I tend to draw inspiration from the old masters. Otherwise, I’m inspired by whatever drummer is killing it in front of me on stage.

There are a handful of drummers who come to record in the studio I am part-owner of, Crystal Clear Sound – drummers that I draw enormous inspiration from each time I hear and see them. Dan Wojciechowski, who is Peter Frampton’s drummer, is a monster. He lives here in Dallas. Whenever Woj comes in to lay drum tracks, it’s just a drum clinic and I learn so much about solid fundamentals, time and groove.

Another amazing drummer that records with us regularly is Stockton Helbing, who is the great Doc Severinsen’s drummer and who used to play with Maynard Ferguson. He’s probably fundamentally the most solid chops drummer I’ve ever seen and heard, with great improvisational skills. What an inspiration to watch and listen to him play.

There’s John Bryant, who used to play with Ray Charles and now plays with Stewart Copeland in D’drum. The guy is a super solid drummer and percussionist. There is a reason these guys play with the greats! They have great time, they are 100% professional and they know their role in any gig. Just to see and hear up-close this level of musicianship helps take my practice and playing to the next level.

I am influenced by almost everything I hear in some way. I’ve always listened to, and appreciated, a lot of different styles of music. You never know what will spark creativity. For example, I am on a life-long quest to peel back the many layers of Afro-Cuban rhythms. I’m afraid it will take me several lifetimes to master.

Riff Relevant [Brendan]: If you could give one piece of advice to an up-and-coming drummer what would it be?

MICHAEL:  I would pass along advice from the great Peter Erskine, whose words helped me take my approach to my role as drummer to a much higher level. He said:

“You are the drummer. You own the time, it’s your responsibility alone – when you realize this, be in service to the song and you will make your band sound great. And then people will say, ‘Now that’s a great drummer!’”

… and listen to everything, and practice every day with a metronome.

MICHAEL:   Both were unique and great drummers. To me though, it was Bonham’s approach that was crucial to the development of modern heavy rock drumming.

We found Michael‘s original endorsement video spot for RimShot-Locs, check it out: