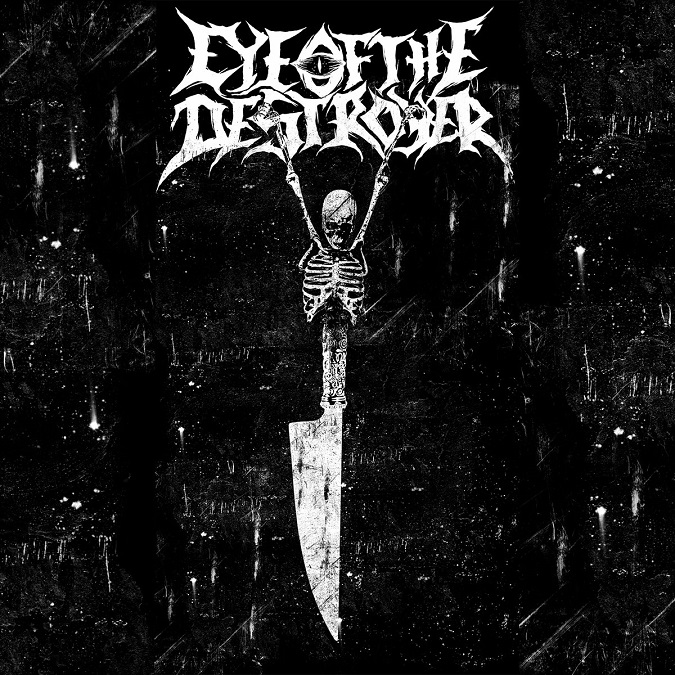 One of the most popular Halloween activities in the state of New Jersey is to get drunk with your friends, listen to Cannibal Corpse, and declare before a mostly uninterested audience, “Fuck it, doods! We’re startin’ a band!”

No one ever does it. They just end up smoking weed in a garage and playing sloppy Slayer riffs from the ’80s. A ten-second video of the practice makes it to Snapchat and the singer gets laid somehow off the strength of the whole charade. The next day the singer, new girlfriend in tow, promptly quits, “Fuck it doods! I’m just over this shit!” Like he’s on the last leg of a four-year European tour.

Fed up with the empty promises and dreams that never were, resident slamaholics EYE OF THE DESTROYER are treading in uncharted waters and making good on their Halloween pact from 2013.

A mob of rowdy, diligent bastards from Kenilworth, NJ, the band has released one full-length and five damned EPs since 2014. They crank out a heavy sound as thiCC as the grindcore twerking videos they’ve been plastering all over the internet.

Their August 2017 EP, ‘Starved and Hanging’, is a tightened-up version of their already brutal flow. “Obsessed With Death” is a bouncy headbanger with crushing riffage and a lot of diversity in vocal delivery and pace. The title track “Starved and Hanging” is all chug riff and gory lyrics. “Mandatory Bludgeoning” closes it all out with some hammering double bass, blast beats, and guttural vocals bred for Michael Myers’ birthday party.

Make no mistake about it, these guys throw the fuck down for 10 minutes straight. There’s a lot of careless deathcore out there, but EYE OF THE DESTROYER is not that band. They have a plan and they’re sticking to it. New tunes posted regularly, staying one step ahead of the ADHD metal culture. Every release is heavier and more impressive than the next.

*Since the time of this interview / review, Eye of the Destroyer has released another EP ‘Violent By Design’ in June. We have it streaming below, have a listen while you check out the interview. Take all the awesome stuff I said about ‘Starved and Hanging‘ and times it by ten. The wise thing to do would be to get familiar with their whole collection (they probably dropped something new in the time it took me to type this paragraph).

When a band kills it this hard in my home state, I take the Riff Relevant corporate chopper** and land it on Eye Of The Destroyer’s estate for a good old-fashioned interrogation. Here’s what I learned about a group of dudes who are keeping Jersey dirty.

**[Editor’s Note: We assume Halsey drives his own car for in-person interviews. Although, he may have a driver to avoid a DWI. ~Leanne]

RIFF RELEVANT [Halsey]:  Congrats on the EP releases. Definitely hard shit. Describe your sound for us.

Eye of the Destroyer:  Thanks! It’s pretty much a melting pot of old school death metal and new school slams with a solid NJ style hardcore backbone. The writing process has typically come down to asking the question “Is it hard” or “is it heavy as fuck?” If yes, then that’s what we go for.

RIFF RELEVANT [Halsey]:  Eye of the Destroyer seems to have the whole social media thing figured out, which is an important factor these days. What is your band doing right that others can learn from?

Eye of the Destroyer:  Consistency and trying to vary the types of things we share. We try to show our personalities and get people involved. If all you post is show flyers and generic band info, it gets boring and can get lost in the shuffle. Gotta keep things fresh and don’t be afraid to think outside the box with content.

RIFF RELEVANT [Halsey]: You guys were formed on Halloween and claim to be big horror movie fans. If you had to mutually agree to kill one member of the band, who would it be and how would they die?

Eye of the Destroyer:  Dan Kaufman will be beaten to death 100% of the time. Just a merciless ass whooping till his last breath escapes him. Any and every blunt object will be considered a potential weapon against him. He will die a slow and painful death.

RIFF RELEVANT [Halsey]: As a band that is willing to get wasted anytime / anyplace, what celebrity would you pick as a drinking buddy?

Eye of the Destroyer:  There’s a shitload of people on this list! One of the top choices would have to be Johnny Knoxville. A bunch of jackasses from Jersey getting hammered with the king of painful physical comedy sounds like a epic night you try to remember but will never forget.

RIFF RELEVANT [Halsey]:  What should people expect to experience when they come to see you live?

Eye of the Destroyer:  We bring a raw and real feeling to our stage performance. Expect head-banging fueled by sweaty intensity that results in a lip-licking good time.

RIFF RELEVANT [Halsey]:  Who would win in a wrestling match, Lemmy or God?

Eye of the Destroyer:  Trick question… Lemmy IS God.

RIFF RELEVANT [Halsey]:  How would you explain the difference between North Jersey and South Jersey?

RIFF RELEVANT [Halsey]:  Do you have any plans for a full length or are you going to continue to tease us with EPs?

Eye of the Destroyer:   At this point, with peoples short attention spans, we feel like EPs are the way to go. We do have enough new material for a full length that we will be shopping to labels, but we are just waiting for the right offer and right people / label to work with. Until then, we keep it short and sweet and try to release often to keep us relevant.

RIFF RELEVANT [Halsey]:  Anything else you would like to say for the good of the order?

Eye of the Destroyer:  Thanks to everyone that’s supported us! Check out all our music, merchandise, and more at eyeofthedestroyer.com

Kudos to the boys for answering #6 correctly. Asses bouncing in slow motion to deathcore is about as tasteful as NJ gets. Show some love!

EYE OF THE DESTROYER: