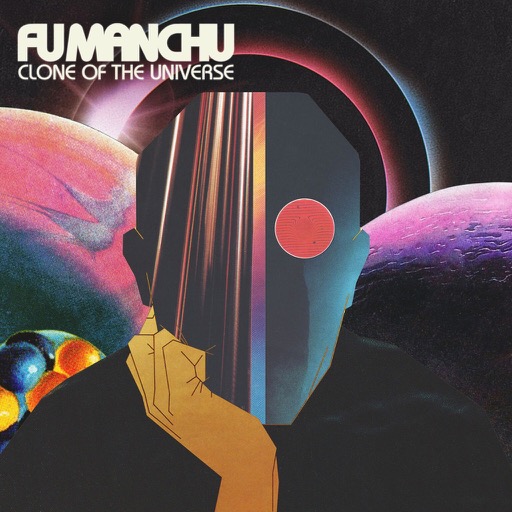 For just about a quarter of a century or so now, Fu Manchu has brought their unique brand of sun-soaked, foot-to-the-floor, stoner metal with such a remarkable level of superiority and consistency, it’s almost frightening.

From their ’94 debut ‘No One Rides For Free’ to the present, they just can’t seem to disappoint. Their latest release from February, ‘Clone Of The Universe’, successfully carries on this musical legacy, if in a (somewhat) subtly altered fashion.

Any potential listener needs to know straight away that ‘Clone Of The Universe’ is not a return to the band’s defining era that ran from the beginning until 2002, at least not thematically. The days of mid-70’s references to muscle cars, custom vans, straight-haired Cali girls, and a general reverence of the decade are gone, and not likely to return.

This is by no means a bad thing, nor anything that really should be a surprise. The sci-fi/space themes were quietly in place even during the band’s salad days, not to mention the release immediately prior to our subject being neck-deep in them, as well. So, let’s get to what’s really going down on ‘Clone Of The Universe’.

The best place to start would be to go back – as earlier alluded to – to 2014’s ‘Gigantoid‘. Though the sound was still immediately Fu, subtle factors had changed the game. The loose, relaxed vibe was gone, the riffs got darker, and this serious tone was hammered home by a less-than-dynamic production. This left me hearing a record that was enjoyable and recommended, yet a little too cold and distant compared to the rest of their output.

Jump to 2018, and yes, the band is still out roaming the spaceways, but apparently, somebody broke out the scrapbook to wax a bit nostalgic.

It only takes a few seconds for ‘Clone Of The Universe’ to indicate to the ears a much warmer and fatter approach than a few years back, while still applying the slightly crunchier riffs, just with more sonic meat. Opener “Intelligent Worship” finds a loose, insistent groove, squeaking in some always welcome cowbell action.

Things stay in hyperdrive mode until “Slower Than Light” comes on with a strong psych build, before going gonzo at track end. This is done to appropriately segue into “Nowhere Left To Hide” a moodier grinder that stands among the slowest and heaviest they’ve ever offered. The title track juices things back up via ‘Boogie Van’ methods, leaving listeners floored by six very intense slabs of tuneage. But wait! There’s more…

Photos by Leanne Ridgeway, check out the rest [here].

Yep, it’s likely that album closer “Il Mostro Atomico” is what people want to know about. Seeing as it’s Fu Manchu‘s first-ever “epic” (all 18 minutes worth), that just makes sense. Well, I can confidently say the curious will not be disappointed. “Il Mostro Atomico” plays like a well-versed travelogue, covering virtually every aspect the band has ever touched upon. One has to be at least a little impressed with the weaving of all those elements into a smooth, ebb-and-flow sonic tapestry that will hold your attention for the duration. This is going out in style, folks.

While I don’t think Fu Manchu will ever be able to knock ‘King Of The Road‘ out of my fave slot, they sure as hell give a strong run at things with ‘Clone Of The Universe’. Everything that came up a bit short last time ’round was addressed in convincing, high-energy fashion, all while somehow still following their cosmic itinerary.

Pardon the pun, but this is one stellar release. ‘Clone Of The Universe’ is available in physical or digital format [HERE].