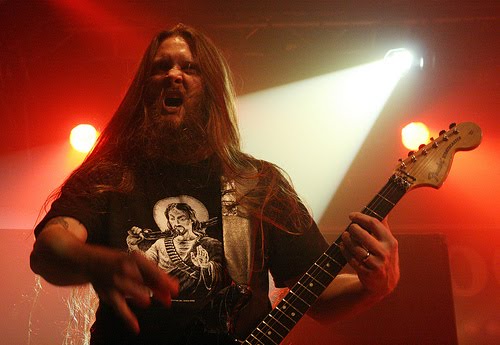 It’s hard to know where to begin when it comes to addressing the death metal pioneers, and now legends, OBITUARY.

The extremely savage metallers’ origins date back over 30 years, to their beginnings as Executioner (that soon became Xecutioner) in mid-80s Florida. In the years since, they have firmly established themselves as one of underground heavy metal’s most revered, enduring acts.

My first time seeing them live was in 1994 – alongside Machine Head for their own first-ever tour – as both supported Napalm Death’s ‘Fear, Emptiness, Despair‘ U.S run. I met them that night and was even invited backstage, thanks to a well-admired Septic Death T-shirt. I still have some Polaroid pictures – remember those? – documenting a wonderful experience for my young metalhead self.

I’d catch them live several more times over the years, during different eras and changing band memberships, with the most recent being a stop in Asheville, North Carolina this past Labor Day Weekend.

This latest event was at the inaugural launch of the Heavy Mountain Music & Beer Festival. More precisely, Day 2, at The Orange Peel, where they would share the stage with High On Fire, Black Tusk, Inter Arma, Exmortus, and Young Widows. It also served as the second stop of OBITUARY‘s own, recently launched “Redneck Run 2 Tour“.

September 2nd would deliver an incredible experience for me personally, and one that we here at Riff Relevant now share with you. I was able to speak with longtime OBITUARY guitarist Trevor Peres on camera*, and he more than graciously tolerated my fanboyish glee and elation at our being there.

We discussed myriad things including various aspects of OBITUARY of course, as well as his involvement in the early 90’s industrial metal side project, MEATHOOK SEED (which included Napalm Death’s Mick Harris and Trevor’s own bandmate, drummer Donald Tardy).

Also mentioned in the exchange is a bit of news about Trevor having released a line of BBQ Sauces, using a nickname – T-Bone – bestowed upon him by the Agnostic Front guys. Find out more about T-Bone’s Famous Smokin’ BBQ – who also operate a food truck – right HERE.

Before we get to it, OBITUARY is out now on the “Redneck Run 2 Tour” in support of their latest Relapse Records release, 2017’s self-titled Obituary. There are a handful of remaining dates (click date for more info):

After their Redneck Run 2 Tour ends, OBITUARY will be heading to Europe in November for a tour run in support of SLAYER on their Final World Tour. [INFO]

Without further ado, we present you a one on one with an ax-wielding maniac, an integral pioneer of the now well-established Floridian Death Metal scene and sound…