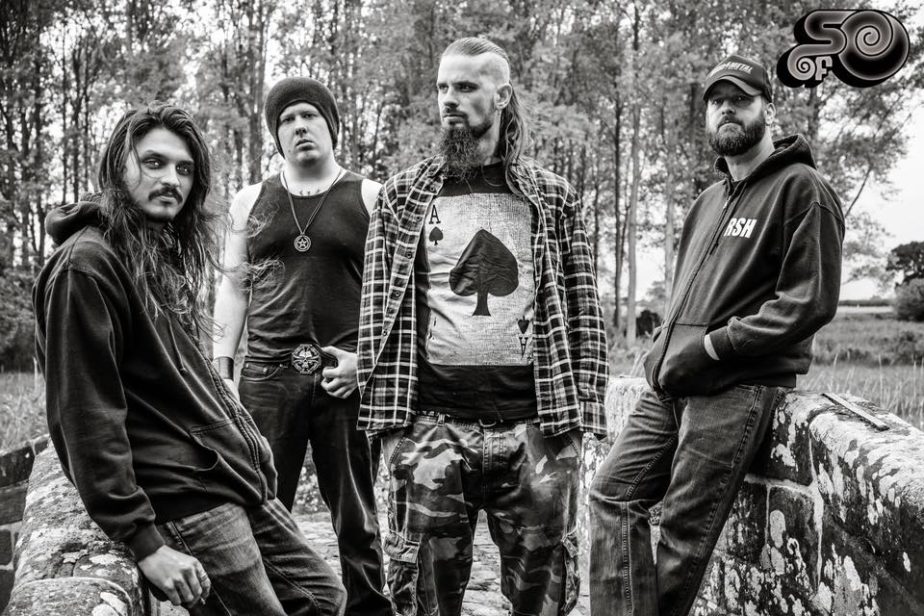 It has been almost a year and a half since the Huddersfield, UK’s SOUND OF ORIGIN stormed on to the underground music scene with their ‘Seeds Of The Past‘ début.

That EP exposed the globe to these Brits’ knack for crafting some of the fuzziest, blues-infused heavy rock happening, something I was all too eager to share via our review of it [HERE] at Riff Relevant. It also landed on my Favorite 2017 Release list, but when it did, I also shared the news that singer John Bussey had exited the band.

At the time, the future of SOUND OF ORIGIN was in question, a situation that cast a shadow of uncertainty on the band’s perseverance. Yet, as is almost always true and ultimately established over time, adversity can be the catalyst for great growth.

Recently, the remaining SOUND OF ORIGIN members – drummer Chris “Foz” Foster, guitarist Joe “Zeph” Wilczynski, and bassist Jax Townend – announced that they would indeed soldier on into the next stage of the band’s existence. That forward advance would now feature a new component, of course, revealed with the band’s welcoming their new singer, Joel Henry Bulsara, into the fold.

Recently, I was able to converse with Chris “Foz” Foster about these events, as well as what the future may hold for SOUND OF ORIGIN. Here’s what I was able to nail down from “Foz”.

On the departure of ‘Seeds Of The Past‘ vocalist John Bussey:

Foz – “John simply expressed a desire to venture into, and explore, other styles of music. We all met up and had a chat in the rehearsal room, shook hands, wished each other well and parted ways last November. We’ve all seen each other since at a local show. We chatted, hung out together and had a beer.“

About the arrival of new singer Joel Henry Bulsara:

Foz – “After having several candidates come in and out of the studio over the period of a few month’s, we stumbled upon an advert for a vocalist wanting to join a Stoner / Doom / Fuzz band on a local musicians offered / wanted site. Several swift messages back and forth later, we met up at a pub in Leeds for a chat and bang … we knew instantly that we had our guy. That very first meeting set the tone as to what was to come. We all got on immediately and hit the ground running. He loved ‘Seeds Of The Past’, got what we said we wanted to do as a band, and he’s since just come straight in and hammered his stamp straight over the new music.“

On current events happening with the band:

Foz – “At the minute there is a lot of work going on behind the scenes. The writing, musically for the album, is complete. [We] have 13 songs altogether but we have trimmed that to 9. We have ramped up the intensity in rehearsals more to tighten up the new material and have started to plan set lists for future live shows. Two videos will be shot to coincide with the [new] release and they will allow us to showcase some of the different sides to our music. Joel is putting the final touches to things vocally and we are itching to get this album recorded and get it out.“

What people can expect from the new music / album:

Foz – “Riffs ha-ha!!! We’ve spent longer working on it all, and pushed ourselves harder and further this time, musically. We all have varying musical tastes and have brought more genres to the mix. Joel plays guitar and he has also brought riffs in, ones which we are using. Much like ‘Seeds’ each song has its own story to tell and we’ve worked hard to make sure that the upcoming album ebbs & flows well. We are all very happy with this new material, and the buzz in the studio when we crank up the volume and play it is something we savor.“

About getting out and playing live at any point soon:

Foz – “We have unfortunately had to turn down a number of shows towards the end of this year and some very good offers at that. The Fuzz / Stoner / Doom and Sludge scene in the UK at the moment is absolutely deluged by awesome bands. Banging album after banging album is being released and we are taking the time to make sure this release sits up there with them. We have some shows being set up for April (2019), courtesy of United In Fuzz, some others that are stacked with bands. So, before we play these, we are looking at doing a few warm up shows beforehand.

We really can’t wait to get out playing live again. We are all very happy with the new material and the vibe when we play together is awesome. This is a very happy camp right now, within Sound Of Origin, and the ease with which this new music has come together will hopefully reflect that.”

Now THAT is all exciting news, right? From what Foz has revealed here, it seems that SOUND OF ORIGIN has indeed readied itself for the next phase in the band’s existence. New music is coming together nicely, a new record is definitely in the early stages of being created, and the band is geared up, ready, and able to storm the live stage, too.

SOUND OF ORIGIN is also set to play the Smoke On Trent – United In Fuzz: All-Dayer on Saturday, April 6, 2019, alongside such bands as Witch Tripper, The Howling Tides, Mage, Quiet The Thief, Psychlona, Supersonic Death Monkey, Ten Days Later, and Satisfiction. You can find more details, information and purchase tickets HERE.