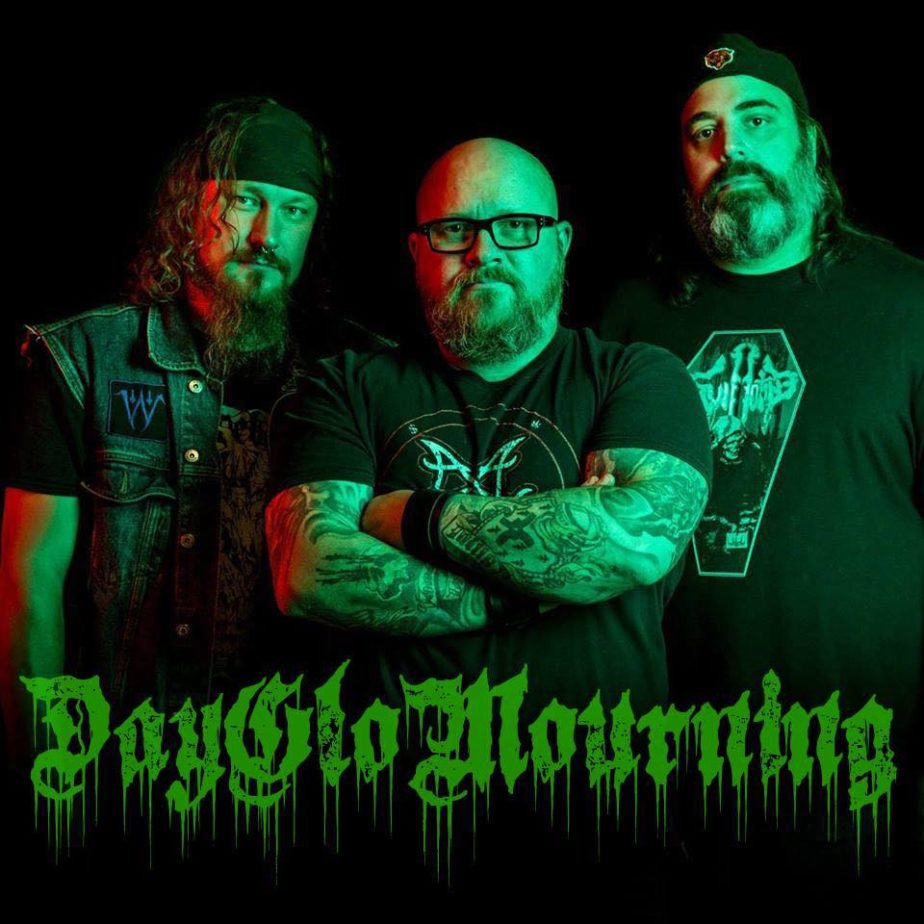 This pair of sonic monstrosities, DAYGLO MOURNING and BLUDY GYRES, will unleash that record, titled ‘Rope Enough For Two‘, on CD and vinyl formats via Black Doomba Records on December 7th.

The contents of the album will consist of three tracks of damaging, downtuned and doomed sludge from DAYGLO MOURNING. Their ATL counterparts, BLUDY GYRES, have contributed an 18+ minute long conceptual suite based on none other than the Jack And The Beanstalk fable.

Today, Riff Relevant is excited to be the host for the exclusive premiere of the uncompromising promotional cut, “Weed Creeper“, from DAYGLO MOURNING. Come immerse yourself in the barrage of visual images that accompany this damnable onslaught of lethal riffs, pulverizing rhythms, and aggressive, matter of fact vocals.

Some might call DAYGLO MOURNING a “brash, young upstart” of a band, one that formed in 2017, and has been decimating audiences at their live shows since. Abusively loud volumes transport the trio’s – Matt Rayborn (Bass/Vocals), Joe Mills (Guitar/Vocals), and Ray Miner (Drums) – real-time rumblings in such a way that listeners cannot remain unscarred once subjected to them.

‘Rope Enough For Two‘ gathers together three of DAYGLO MOURNING‘s singles together in one place for the first time: “Dark Ritual“, “Wizard In White“, and, of course, “Weed Creeper“.

Fellow Georgian juggernaut, BLUDY GYRES, are a metallic doom transmitter that was birthed in 2013, by two alumni of the legendary Hallows Eve, bassist Chris Abbamonte and guitarist/vocalist Tommy Stewart. With the addition of Dennis Reid (drums) and Isidore Herman (guitar), BLUDY GYRES went to work on creating some of the underground’s fiercest, most sinister metal yet.

Get ravaged by their latest creation on the upcoming ‘Rope Enough For Two‘ split with DAYGLO MOURNING when it arrives from Black Doomba Records on December 7th.