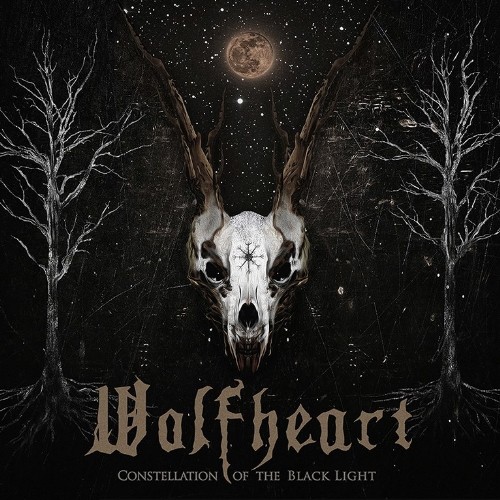 It’s not for nothing that Wolfheart has become one of the most talked-about melodeath bands in recent years.

Sure, they’re prolific – their just-released fourth album, ‘Constellation Of The Black Light‘ (Napalm Records), follows fast on the heels of their stunning 2017 effort, “Tyhjyys.”

But it might be the anticipation they build in each song, of where they’re going to go next and how they eventually get to that in each track, that makes their work so compelling. Saukkonen addressed that in emailed responses to questions.

“I (try) to create the music in a way that it tells a story and has its own line of drama,” he wrote. “I also write the lyrics in the studio, never before – (I) need to hear the song at almost its final form before writing the lyrics down and doing the vocals. That means that the song has to stand on its own firmly as an instrumental and needs to stay interesting from beginning to end even without the vocals.”

Songs like the first single “Breakwater” certainly illustrate that, with the orchestration lingering just in the background and lending so much depth and the beautiful guitar melody in the outro. Or “The Saw,” with its blend of acoustic guitar and piano and its meaty, chugging groove. Or “Warfare,” all speed and aggression and drama, with an orchestral part undercut by astonishing triple-kick drumming.

Here are more of Saukkonen’s responses to questions on a variety of topics:

Riff Relevant/Kira:    You ended several other projects before focusing solely on Wolfheart in 2012 (Black Sun Aeon, Before The Dawn, The Final Harvest, Dawn Of Solace, and RoutaSielu) — what was it about this particular entity, maybe the group of musicians you had gathered, maybe the themes you were dealing with, the music you were writing, that made you want to focus on it completely?

Tuomas Saukkonen:    At the time, there was a lot of negative issues inside the bands (and) with labels. (I) just wanted to burn everything down at once so I could build something new from the ashes. While I was writing the last Before the Dawn album, I already knew that it (was) the final (one) and which direction I want(ed) to continue with the new band.

The first (Wolfheart) album, “Winterborn,” was actually a solo album. I just wanted to take a small break from the whole music business and just focus on the music (and) release the album on my own.

What Is “Winter Metal”?

Riff Relevant/Kira:    I think the term reflects both on where you come from (the external winter) and in perhaps a metaphysical sense (the internal winter, the cold in the soul)?

Tuomas Saukkonen:    Indeed it comes from both directions. Also with the mix and production, I am for both cold and harsh, but (with a) massive and beautiful result, just like Finnish winter can be as its best.

Riff Relevant/Kira:    Could you first talk a little about what it’s like to be from a place where the force of nature is so overwhelming and why you are so compelled to try to describe that?

Tuomas Saukkonen:    It is just a natural theme for me to write about and also (to) use wintery terms and themes (to) describe solitude, darkness etc. I do 90 percent of my songwriting during winter, so that season is very strongly present when I am on my creative phase.

Riff Relevant/Kira:  Could you also talk about how that “winter” permeates the soul in that metaphysical way? Would you say it’s depressing to face that every year (obviously it’s hugely inspirational, which of course benefits you), and how do you deal with it? Do you embrace it and again be inspired by it, or is a little of that bleakness always there?

Tuomas Saukkonen:    (It’s) not depressing at all. I love all four seasons in Finland, but still winter is my favourite. Summers are always really hectic for me since I work as stage manager/backliner/producer at festivals. My main job is (as a) gardener/landscaper, so usually (in) summertime I work (a) minimum 250 hours a month. When the winter comes, both jobs are done (and) I have a loooooong winter vacation. Everything calms down and (I) just focus on the music. Winter is silent, peaceful and beautiful. Nothing to be depressed about!

Riff Relevant/Kira:  The band is brilliant — I haven’t heard a drummer as clever and interesting as Joonas in forever, with his jazz-influenced fills and his highly syncopated cymbal work. Can you talk about working with them, how they enhance your creative vision?

Tuomas Saukkonen:    I always build the main arrangement for each instrument. After I have the song composed and arranged, I give the raw versions with programmed drums to Joonas and then he will work on top of those. He has an amazing arsenal when it comes (to) fills (and) patterns and we work together closely also in the studio. I always play guitar with him while he is recording drums and even play in the same room where he plays, so (a) big part of the recordings is still trying different fills and cool hooks for the drums.

Riff Relevant/Kira:    You write everything, music and lyrics, so describe what input the others have in creating the work aside from playing it, like the creativity of the drum parts, for instance?

Tuomas Saukkonen:    I get some ideas from all the guys. Mika (Lammassaari, the solo guitarist) has done (a) few songs together with me and he composes all the guitar solos he plays. For drums, I do the main arrangements and patterns, but Joonas always adds his tricks. I used to play drums for 15 years and also played drums on the debut album — I can’t write a riff without having already the drum pattern playing in my head.

Riff Relevant/Kira:  The reason your work impresses me so much is the sheer density of the music, the layering of all the disparate elements, and with all that, the utter fearlessness with which you combine all of it. Can you get into that?

Tuomas Saukkonen:    Fearless is a strong word. It is not like I have to decide to do stuff while composing. To me, it comes naturally to build big contrasts in music. I want drums to groove and lead the way and that rarely happens if the drummer is just machine-gun-style-metal oriented. (A) wider background from rock/pop/jazz gives so much more dynamics (to) the drumming. I also want to silence the song in a way that sometimes only one acoustic guitar carries the song before exploding into the next part with heavy guitars.

Riff Relevant/Kira:  You posted a video a while back where you spoke about your formerly 7-string guitar and you said you have “no use for high strings” – that’s clear from the powerful low-end your music has. And you strum with the low strings almost in a bass-type motion, and that really fast strumming on those low strings sounds so fluid and gives the guitar a really percussive quality – how did you develop that part of your playing?

Tuomas Saukkonen:   I have been moving into lower and lower tunings for years and eventually I had to buy a baritone guitar to be able to play in A or G tuning without losing the tension of the strings. I have been training to get the strength and stamina to be able to play our fastest songs with those strings, but when you get there it sounds massive. With my picking, I also follow the dynamics of my drummer’s ride/hi-hat hand and double the accents, which means I hit certain notes a bit harder during fast picking, which makes the guitar and drums groove together really well.

The Title And A Few Songs:

Riff Relevant/Kira:    Where did the new album’s title come from, “Constellation Of The Black Light”?

Tuomas Saukkonen:    It is like a darker version of our dimension. You see (a) snow-covered forest, (the) moon and the stars in the sky with (the) northern lights, but inside you feel like the forest is dead, everything is dead, (the) sky is cold and empty.

Riff Relevant/Kira:  It seems that this is, at least in part, a concept album, where the theme is a warrior preparing for the final battle. In Decibel magazine, you said the theme is the war between Finland and Russia during World War II, but I saw it almost as more one individual in that war — can you talk about that?

Tuomas Saukkonen:    It is more as an individual in that eye of the storm moments just before the last battle. My lyrics are not tied to any particular historical event or time. I was more just going through different scenarios (and) emotions that would go through in my head in certain situations – (like) would I have the courage, what would I become when there would be blood on my hands.

Riff Relevant/Kira:    When you talk about the concept of winter in “Everlasting Fall,” are you saying that it is something that is dreaded in some way, but is also inevitable? It’s also very much a reference to nature (the barren soil, the barren water, that fall leads to the dead time of winter) and there is a lot of that in your work — can you talk about that?

Tuomas Saukkonen:    As a winter person, I do wait for the fall and always just hope that the fall would go through fast. If you observe the current situation of our earth, the winter is slowly fading away. Every year, it takes longer and longer to get snow in Finland, and melting glaciers and tundra are bringing bad news to the whole (of) humanity.

Tuomas Saukkonen:    It is about inner strength and determination — preparing for something grand and holding your ground no matter what comes in your way.

Riff Relevant/Kira:  By the song “Defender” I realized that groove is a really important element on this album — would you agree, and if so, why?

Tuomas Saukkonen:    I definitely agree, and like I explained earlier, it is very important to me to have a groovy drummer. Each instrument (is) played in a way that they support the groove and the dynamics of the drums, making the whole band sound tight but organic.

Riff Relevant/Kira:    What happens next after this upcoming tour with Carach Angren touring wise (it ends October 28 in New York)?

Tuomas Saukkonen:    We are coming back to (the) U.S. in the beginning of 2019. Before that there is a (European) tour for November and (a) Finnish tour for December. So, busy times ahead!

Find the itinerary for next month’s “Blacklight Constellation Above Europe Pt. 2” Tour below. Find info [HERE].