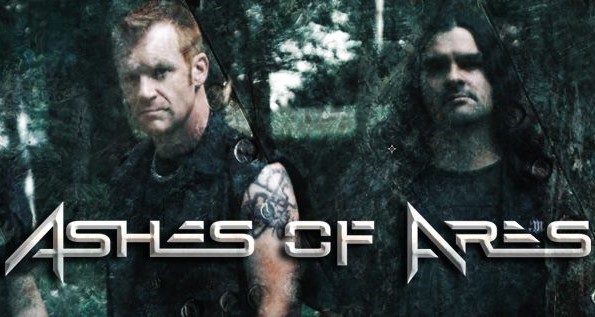 As the upcoming release of their sophomore album nears, ASHES OF ARES shares a new official video from the offering.

“Let All Despair” hails from the nearing ‘Well Of Souls‘ release, which is due on November 9th from ROAR! Rock Of Angels Records. Vocalist Matt Barlow shared the following comment on the latest single:

“‘Let All Despair’ is the first song in the ‘Well Of Souls’ trilogy. It is the introduction into a world that is on the brink of destruction. This is a time in the life cycle of Mother Earth known as the Purging Time. At this point in Earth’s history, the human race is infantile compared to other of Her surface-dwelling life forms. The trilogy is the story of humanity’s introduction to the revelations of The Mother’s direct connection with all of the life that fall under her care. Also, the understanding that when She enters into dormancy, all life on Earth are vulnerable to outside forces in our universe, that consume all souls left unprotected.“

Once again joining Barlow within ASHES OF ARES for the new album is guitarist Freddie Vidales, but absent is drummer Van Williams. Williams played on ASHES OF ARES‘ 2013 self-titled début for Nuclear Blast Records but exited the band in early 2017.

While the contributing players to the recording of ‘Well Of Souls‘ have yet to be publicly revealed, the band shared (via their Facebook page) the following info about today’s video premiere:

“We hope you enjoy our new video for the song “Let All Despair”. We had a great time working again with MyGoodEye, the same folks that did “This Is My Hell”. Allow us to introduce our friends and fellow players appearing in the video:

Charlie Honig on guitar – Many of you know that Charlie has played live with us in the past, and we were happy to have him along for another adventure.

Kyle Taylor on drums – Kyle and Freddie have known each other since middle school and started their very first band (Infusion) together.

“Let All Despair” was directed by David Brodsky from MyGoodEye Music Visuals, it is streaming below along with a previously shared single, “Soul Searcher“.

U.S. pre-order for ‘Well Of Souls‘ from ASHES OF ARES has launched and is available now at this LINK.