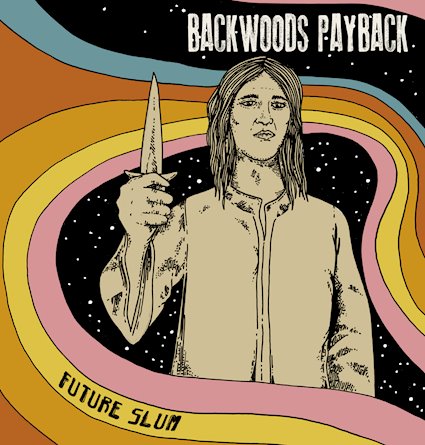 ‘Future Slum‘ arrived via CD, Vinyl, and Digital formats directly from the band. BACKWOODS PAYBACK didn’t do it extravagantly. There weren’t six months of torturous teasing, they banged this beauty out and let it loose upon the world on their own. DIY all the way, baby. But if you’ve been paying them the attention they deserve, you’d have noticed that they most certainly did it properly.

This recent onslaught of heavy from Mike Cummings (guitar and vocals), Jessica Baker (bass), and Erik Larson (drums) was recorded and mixed in February, engineered by Mike Bardzik at Noisy Little Critter, and mastered by Tom Volpicicelli at The Mastering House. Album details (including Royal Thunder‘s Mlny Parsonz appearance), as well as a full Bandcamp stream, review, and upcoming tour dates, are all below.

Considering my months of raving over ‘Future Slum’ to acquaintances, its Doom Charts appearances in August and September, and being serenaded by it on several deafeningly loud road trips, my review of this record is long overdue.

There were easily ten separate reviews written in my head while on those roads, including my drive to see them (among others) perform at 2018’s Maryland Doom Fest. That live performance deserves a review in its own right, but rather than relying on memory of their annihilation of the fest crowd, I’ll stick to my late-but-still-loaded guns and start things off with that Doom Charts blurb I wrote some months back…

“The new Backwoods Payback album ‘Future Slum’ slips the mind toward nostalgia, yet hurls you blissfully forward in its modernized heavyweight angst. Wrapped up in no sense of nonsense, ‘Future Slum’ is genuine smiles through trails of gasoline tears. Pure fire.”

The album is indeed fire. From the first stream, which stayed on repeat for five hours straight, ‘Future Slum‘ overwhelmed me. The album is audibly and emotionally jarring in righteously beautiful ways. We talked about it on the Electric Beard Of Doom for Episode 104, and hopefully corrupted many new listeners.

Pat Harrington (Electric Beard Of Doom) told me: “‘Future Slum’ is their protest album.” This statement has stuck in my craw ever since. Even simply taking a literal interpretation, it rages a lyrical revolt against the norm (or ab-norm). From the fast-paced angst and frustration of “Pirate Smile” onward, there is a recurring theme that asks that we use our eyes – to open, watch, see, or un-see.

The last line of “Pirate Smile” is “…open up my eyes”, and leads directly into the next track “Lines” and its beginning “open up your eyes and wonder.” Mr. Cummings’ vocals start off “Lines” with a soothing, lullaby tease to the mind, nudging a self-pursuited awakening before he turns on a dime to knock you senseless with wailing demands. Ms. Baker and Mr. Larson relentlessly pound that message to the back of your skull.

“Whatever” invites us to share a sludgeoned ride of dark and doomed indifference smothering a plea of masked desperation. Baker and Cummings trade off chilling full-force screams near the close, while Larson virtually destroys his kit throughout. It’s brilliantly executed, yet comes out as natural as ocean waves.

Anthemic and addictive, the more I listen to “Threes,” the more it rips me apart from top to bottom. Lyrically, vocally, sonically… it’s exquisite. The chant of “nonsense and no sense makes sense,” for all its tongue-twisting simplicity, may very well explain the state of all things in every sense. “Cinderella” is a harrowing ballad of veiled messages delivered with hauntingly beautiful subtlety. This song bears repeating if only to recognize its slow-burning build-up of glorious sadness.

Beyond the natural beauty of Mike Cummings’ widely varied vocal style and electrified willfulness of his guitar tone, or Jessica Baker’s threatening rhythms and lamenting screams, the entire album has a thick weight to deeply sink in sharp teeth. However, the highlight for me is in listening to Erik Larson, as his drumming is intricate, tribal, delicately devastating.

There are absolutely zero reasons to not listen to this album. Each song of ‘Future Slum‘ stands on its own. There is no filler, no song can be disregarded as an afterthought. This album contains more pure humanity than an entire nation.

Witness a Backwoods Payback live show, find one near you in the dates below.