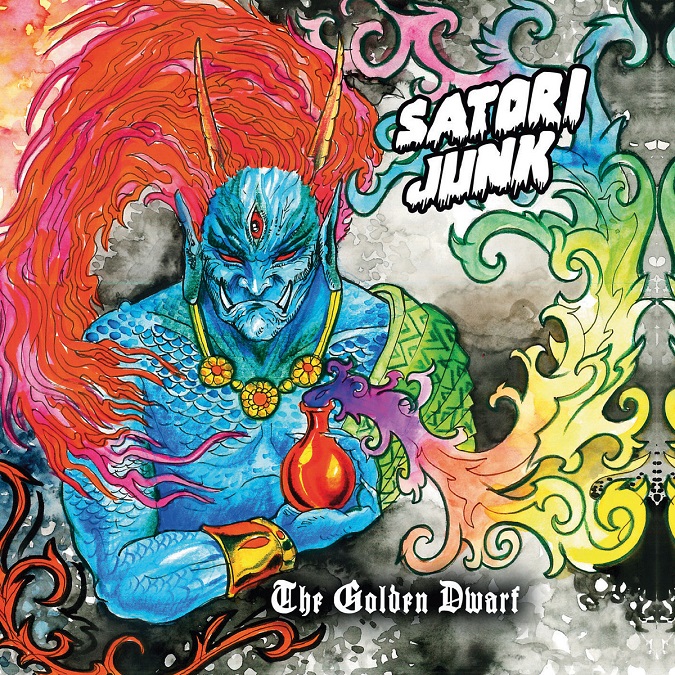 I said it then, and nothing has changed – Satori Junk‘s 2015 debut was my favorite album of that year. Its grinding, pill-poppin’, horrorshow rumblings remain one of the most unique and hypnotic doom efforts ever released.

The band set the bar so high, one had to wonder how they’d match up for the next time around. Jump to 2018, and listeners get their chance to find out with ‘The Golden Dwarf‘, and it will not disappoint. Recorded and mixed by Enrico Baraldi at Waiting Room Studio, with mastering by Claudio Adamo at Fonoprint, both in Bologna, Italy. The cover art design from Horibudo I (Roberto Borsi) and original artwork by Luca Ferro.

After a brief spoken intro (or perhaps a warning) detailing the events to unfold, Satori Junk throws a bit of a curve out with “All Gods Die“, by having the first half of the song build through a blues/jazz mingling that seems equal parts Jim Morrison and Chick Corea.

After that though, it’s vintage Satori Junk for the rest of the candy-colored, psycho-delic journey. Hypnotic, mega-heavy riffs (with tasty solos interspersed, of course) that buzz like a Geiger counter at Pripyat, spot-on rhythms, and keyboard/theremin action utilizing repetition to its logical extreme. With a keen sense of knowing when to relieve this tension, the quartet breaks off with pinpoint accuracy to allow shifts, breaks, and changes to intervene, keeping ears holding firm to the controlled chaos.

Now, anybody looking at the track selection is going to be curious as to how faithful the cover of “Light My Fire” is, and all I can say is – don’t be. They render it unrecognizable, in a very good way.

I would be remiss in not mentioning the one significant change in Satori Junk‘s sound – the vocals. Whereas the singing on the first record was effect-laden and distant, this time they are clear and have a natural deep resonance. Good move, and a welcome bit of added seasoning.

For the second time running, Satori Junk has hit it out of the park, with bases loaded, no less. There was zero need to overly tinker with a winning formula that already stands out from virtually everyone else in the pack, and I’m glad they didn’t.

Just sit back, dim those lights waaay down, and prepare for the aural equivalent of a vintage 60’s Hammer flick or Night Stalker episode. Carl Kolchak would most assuredly approve.