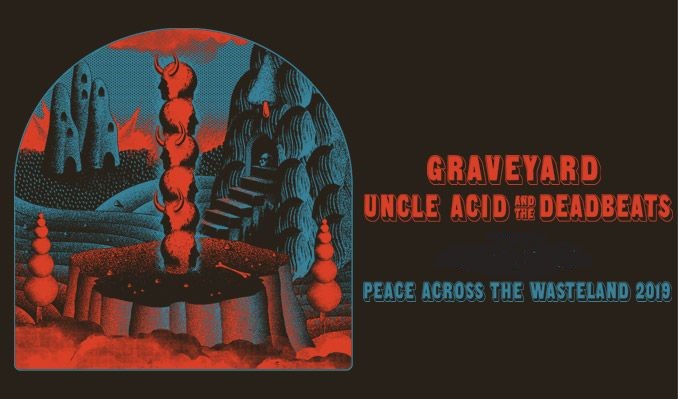 UNCLE ACID AND THE DEADBEATS and GRAVEYARD are teaming up next March for the “Peace Across the Wasteland” co-headlining North American Tour.

The tour kicks off March 6th in Philadelphia, Pennsylvania, and runs through March 30th in Toronto, Ontario, Canada. TWIN TEMPLE will provide support through the March 16th date in San Francisco, CA., while beginning March 18th, DEMOB HAPPY will join the tour for the rest of the run.  A complete list of dates can be found below.

The name attached to the trek, “Peace Across the Wasteland“, is a reference to the co-headliner’s latest album releases. The UK’s UNCLE ACID AND THE DEADBEATS have just released their fifth studio album of hypnotic psych-rock, ‘Wasteland‘, via Rise Above Records earlier this month (Oct.).

“It’s time to let Peace roll out across the Wasteland. Graveyard and Uncle Acid And The Deadbeats will co headline a tour of North America in march 2019. This will be the first time the bands tour together and were both bringing tons of new music. This one is going to leave no mind unblown.“

With UNCLE ACID AND THE DEADBEATS‘ mastermind Kevin Starrs, adding:

“We’re looking forward to travelling across the wasteland and destroying minds with Graveyard in 2019. This will be our first North American tour in three years so it feels long overdue. See you down the front!”

“Peace Across The Wasteland Tour”