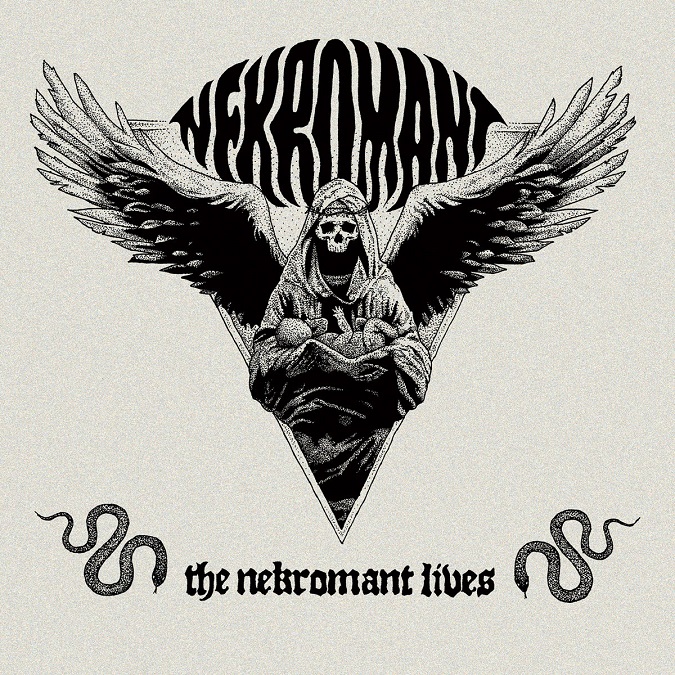 For someone who prides themselves as being relatively up on most things heavy, I have not done a particularly good job with Sweden’s Nekromant.

Truth be told, until this offering up for review now, I hadn’t listened to them since 2103’s ‘Slaves To Babylon‘ release under their original moniker, Serpent. In preparation to write this, I did go back through their entire output, and walked out with the best possible conclusion – ‘The Nekromant Lives‘ is a band-defining caliber recording.

Let me make clear right away that this is in no way a knock to their previous efforts. On the contrary, it’s all rather good. That said, the band did seem stifled by falling prey to many of the genre’s trappings, and by doing so, became somewhat faceless, despite the obvious talent.

Released by Ripple Music on October 19th, all songs were written and performed by Nekromant, recorded and mixed by Svein Jensen at Grand Recordings, Gothenburg, with mastering by Göran Finnberg. The cover artwork is by Tessa Najjar.

All of that has been wiped away for ‘The Nekromant Lives‘. The production is crisp yet punchy, and the songwriting is now up to the level of being craftsmanship. This is some catchy stuff, folks, and with no loss of power, either. Melodies virtually travel through every second of the nine tracks presented, nicely aided by some really potent vocals of the clear, emotional, but never flaccid variety. The thicker, doom-inspired approach of days past is now sharp and revved-up, recalling the best that early-to-mid 70’s hard rock ever had on offer.

We all love our references, now don’t we? So, how about some? Well, I’m hearing classic Purple, Heep, and maybe a pinch of Sabbath, along with hints of Moxy and Legs Diamond, all nicely topped off with a keen sense of NWOBHM drive and melody.

On the more modern end, (The Lord Weird) Slough Feg, Demon Eye, Shadow Witch, and Ripple Music label mates War Cloud all come to mind, as well. In my book, this is some awfully strong musical company to keep; they fit in quite nicely but have their own mixture of magic to rely upon.

I’m certainly no clairvoyant, and most days I can’t even remember what socks I’ve put on. I will confidently state this, though – Nekromant’s latest is going to land them near, or perhaps even on top of a great many of this year’s best release lists. It will take just one listen, and you’ll know. I promise.

You can purchase ‘The Nekromant Lives‘ on CD and various vinyl options from Ripple Music [HERE]. Digital download and streaming is available via Nekromant‘s Bandcamp page [HERE].