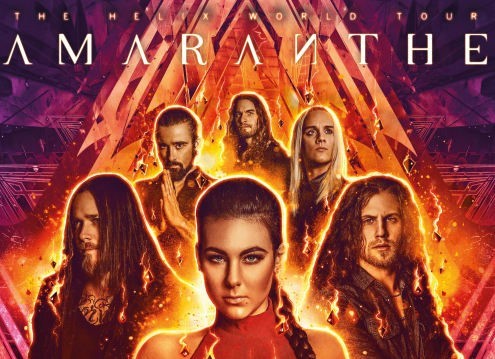 On paper, there’s no way this should work.

Three singers – a death-metal growler, a high male tenor, and a soaring female soprano – who trade lines and intertwine flawlessly about each other, often in tempos and rhyming combos evocative of hip-hop.

Wafts of keyboard electronica melding with lashings of guitar riffage.

A powerful pop sensibility given heft and grounding by pure metal grit.

But it all does work for the Swedish band Amaranthe, and not any better than it does on their latest album, ‘Helix‘ (just out from Spinefarm Records). They have solidified and fully realized their sound this time out by making it heavier, which also seems weird, but is exactly what they should have done.

Amaranthe specialize in crunchy, irresistible tracks that are so catchy you want to hit someone, but you can’t, because you’re too busy helplessly head-banging around the room. That vocal approach, arguably the most unique in metal – the clean female singer (Elize Ryd), the clean male singer (new addition Nils Molin), and the manic screamer (Henrik Englund Wilhelmsson) – is partly why the insane earworm that is the first single, “365,” garnered a million plays on YouTube in a three-week period. The rest is thanks to guitarist Olof Morck, bassist Johan Andreassen, and drummer Morten Lowe Sorensen.

If brevity is the soul of wit, as someone once said, Amaranthe has that soul. Each track is three or so minutes of exhilaration, no belaboring of any points. Right out of the block, “The Score” is a driving statement on self-determination and doing what you feel is right while following the lessons from the past.

“365,” with its reference to “365 and a day” – that is to say a year and a day – is about how it’s a constant struggle to avoid the hive mentality amid those who might be forcing you to conform (“frequencies are seeding you, feeding your automation,” as Molin says) in order to pursue the need to be unique, to say no and thereby “save your soul.”

It’s apparent how much their songwriting has matured with something like “Inferno” (video), a blast of defiance about damning others’ opinions (“I got 99 problems but your hate ain’t one,” bellows Wilhelmsson). It might even be a commentary on the fakery of social media, as Molin snarls, “All the hate and the lies / And the problems that you find / And the fights you make up / Make you feel just a little bit better.”

The wicked swing and sharply delivered rhyming of “Countdown” (video below) vaguely references addiction as a means to hide insecurity (“Breaking the spell, the appearance of perfection”), of trying everything and living on the edge, but realizing it’s falling apart fast. This is one track where Wilhelmsson’s vocals are especially effective – he spits out lines with searing self-loathing.

The driving, irresistible groove of “Helix” offers more really effective vocal trade-offs (not even verse by verse, but all the way down to line by line, including a basically rapped portion by Wilhelmsson) and a quick, but tasty, guitar solo bursting with harmonies.

“Dream” is slightly more mid-tempo (there are no real ballads here as there were on ‘Helix‘’s predecessor, ‘Maximalism‘, and thank goodness for that) – it’s about making dreams a reality despite obstacles and discouragement and features Ryd’s very delicate, ethereal vocals.

“GG6” is a blast. It centers on Wilhelmsson in a big way and it’s like it was written especially for his personality. It’s heavy on his roars and features a terrific slow-burn torchy chorus from Ryd (“You’re coming at me and they say that you’re crazy / A growling gangsta with a tongue like a razor,” she purrs). Very techno-heavy with touches of altered vocals, it might be the most hip-hop influenced of all the songs.

“Breakthrough Stardust” is pure sugary fantasy and very nearly dance-pop, despite its heavy guitar breakdown. “My Haven,” also a bit slower, is a musing on that safe place we have within and the pain we feel when it’s breached. “Feel the dark side emerging / From the fear inside of me,” Wilhelmsson rages, and Ryd mourns beautifully in the chorus, “Ashes to ashes and dust turns to dirt.”

The frantic “Iconic,” that bursts into a soaring chorus, could be about the joys of live performance and dragging people out from in front of their phones to see a show (“I am so much more than just a cyberspace delight,” Molin reminds).

The somber “Unified” only borders on ballad territory. It hints at loss and having someone’s presence always with you. Molin’s singing in the opening verse and chorus is tender but potent, and his and Ryd’s voices twine together lushly on the final chorus.

It’s fitting Amaranthe ends with a track like “Momentum,” because that’s exactly what they’ve generated here. Bursting with confidence, Molin promises, “I am back, back down, I’m unsatisfied / I have millions to inspire.” “Raise expectations”? They certainly have.

Should you choose to hang out for the bonus tracks (which include an acoustic take on “Dream”), you will discover the one ballad, “Say The Word,” a lovely acoustic with Ryd’s trilling adding light to Molin’s warmth. You could skip both and not lose anything since they almost take away from the conciseness and punch of the rest of the album.

Stick to the body of ‘Helix‘ and stay open-minded (this is not metal for everyone, remember) and be richly rewarded.

Amaranthe will embark upon “The Helix World Tour” beginning this week. A variety of acts will be providing support on different legs of the trek, including Powerwolf, Kissin’ Dynamite, Follow The Cipher, and Warkings – find all tour dates [HERE].