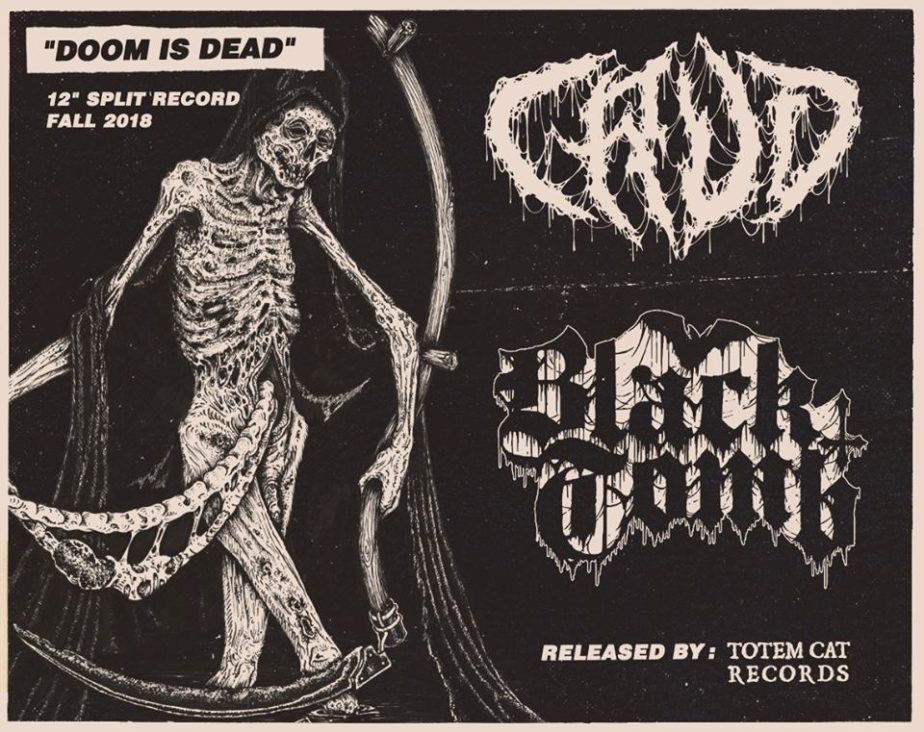 On the recent ‘Doom Is Dead‘ split release from Totem Cat Records, tracks were contributed by two bands that represent the best in U.S. East Coast-based savagery, from one end of it to the other.

See, BLACK TOMB hail from the New England region, and their music is akin to a pulverizing juggernaut of lethal proportions. With a brutal base built with buzzing guitars and destructive rhythms, they deliver an incessant onslaught of apocalyptic sludge.

Then there is Florida’s CRUD, a band that is doing their part to keep the Sunshine State’s death metal legacy a’dead and stinkin’. Like so much decomposing refuse, the band exudes devoutly extreme, sinister heaviness that is second to none in its lethal rendering.

On their newly issued ‘Doom Is Dead‘ split, each abominable act contributes two tracks each. First up is BLACK TOMB with “Whips Of Iron” and “The Rotting Vault“, a pair of tracks so fatally nihilistic they will leave you hopeless once heard.

Bleak, obliterating aural density rolls you asunder its tumultuous treads, slowly grinding your being to so much silt and dust.

If you somehow survive that experience, you must then face the double-barrel discharge of CRUD‘s “Catacombs” and “Alone In Vain“. Ever heavier, and heavier yet, this grimly disparaging output of murky, oozing audio and inhuman vocals is unsettling… and oh-so inescapable.

Stream the ‘Doom Is Dead‘ split from BLACK TOMB / CRUD here in the review. Also, you can currently acquire the pair of tracks from BLACK TOMB – “Whips Of Iron” and “The Rotting Vault” – at Bandcamp as a NYP (Name Your Price) item at this time [LINK].