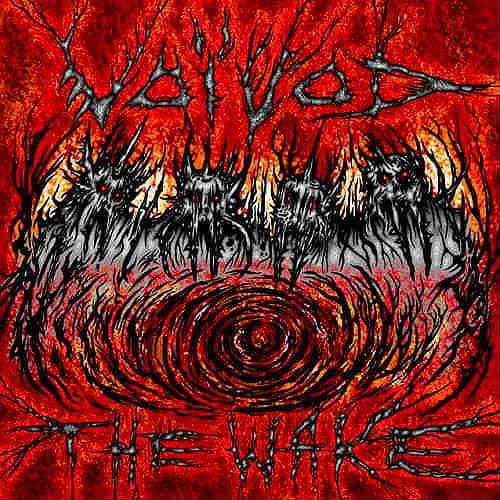 Any band that has the stones and tenacity to hang around for nearly four DECADES is bound to have its share of “Shawshank” moments – of wading through a tunnel of shit in the hopes of finding the sweet relief of musical freedom at the other end.

VOIVOD‘s moment came with guitarist and co-founder Denis “Piggy” D’Amour’s diagnosis and tragic death at the hands of colon cancer. The years after his death were filled with searching – searching for reasons to continue, searching for ways to heal, searching for a way forward without repeating themselves or tarnishing their legacy. Some of that old magic began to take hold with their 2013 release ‘Target Earth‘, but they still needed an over-arching theme to unify the material and point them in the direction of past glories such as ‘Dimension Hatross‘ and ‘Angel Rat‘.

With the September 21st Century Media Records release of ‘The Wake‘, VOIVOD‘s compass has been reset to factory conditions, maybe even better than ever.

The latest installment of VOIVOD‘s oeuvre begins with “Obsolete Beings”, an obvious comment on our obsession with social media, the latest in a long line of technological threats the band has been railing against since their inception. The group sounds reinvigorated, a box full of toys with sharp edges, the full-bodied sound giving instant gratification, inviting us to climb inside. The whammy bar oscillations of guitarist Daniel “Chewy” Mongrain create a seasick feeling while infusing the solo with obtuse contours stolen from the main vocal melody.

The relentless march of “The End of Dormancy” features vocalist Denis “Snake” Belanger‘s robotic drawl, instantly giving the song that classic VOIVOD tone. Chewy’s winding guitar labyrinths that begin during the pre-chorus (“Because no god ever saved anyone”) lead us circuitously back to the opening guitar rhythm, which also serves as the brick and mortar of the chorus. The oppressive vibe is carried over into the syncopated snare deviations that inhabit the song’s breathless breakdown, prepping the listener for the other-worldly guitar breaks that punctuate the next portion of the song, Away‘s kick drums increasing in intensity and speed, invoking dread and quickening heart rates.

The dentist-drill scrapings of “Orb Confusion” come next. Away‘s hyperactive drumming driving the music forward, the song at times calling back to the tightly constructed tunes of ‘Angel Rat‘, Snake proving his mettle once again with his cyborg-like vocal phrasings. The slithering guitar riff that first accompanies the lyric “No more incredulity / No more false reality” expertly employs palm muting and harmonics before the intense lead break by Chewy proves once and for all that VOIVOD picked the right man to step into the void left by D’Amour.

The claustrophobic riffing of “Iconspiracy” gives us no quarter, almost suffocating us until the mysterious string quartet tones that arrive at the 2:30 mark resuscitate us and inform the music with an almost classical vibe, the guitars climbing towards a splashy cadenza of hyperactive melodic constructs. The next few songs cycle through enough ideas and time changes to fill an album all by themselves, and the band’s newfound joie de vivre shines through for all to see.

“Always Moving” features those familiar, but always welcome atonal guitar riffs, backed by punk drum patterns that shift briefly into the ethereal realm before allowing the pendulum to swing back towards the breakneck pace of the opening. The gentle beginning of “Sonic Mycelium” doesn’t linger long, Dominique “Rocky” LaRoche‘s mid-rangey bass making its presence felt. Mograin‘s clanging chords swirling about, the band revisits various strains and themes from the album in a kaleidoscopic burst of colors and tempos. The song culminates in a wholly unexpected string quartet outro that brings the album to a close on an almost quizzical note.

Is this pointing towards one possible direction in VOIVOD‘s future? Only time will tell, but the one constant in VOIVOD‘s music is the inevitability of change and experimentation.