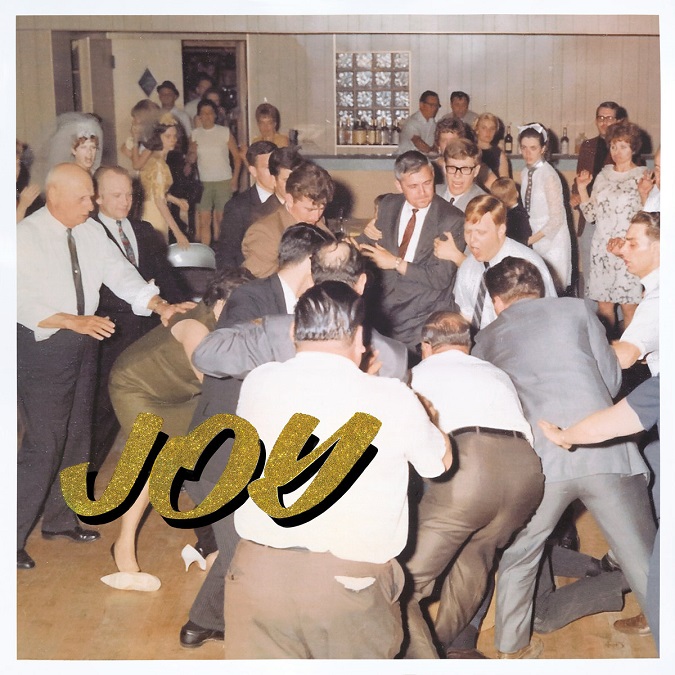 I begin this review by expressing my distaste for the musical terrorist that spawned the Post genres. It makes my eye twitch, for the sheer fact that it makes no sense. “Post” meaning after, by simply inserting any genre following “Post” can mean anything.

Post Rock could literally be any artist or band – Katy Perry is Post-Hardcore, and Infant Annihilator is going to be on the next Sub Pop release. Seriously, whoever created this monstrosity should be crucified. Now that I got what I wanted to talk about out of the way, I must admit that when it comes to the Post-Punk genre, I have very limited exposure. I’ve always been a little intimidated by it, for two reasons.

First, is the impression that everyone in that scene seems to look like Edward Scissorhands and has a Valium dependency. The second is the for what I’ve already described, there is no real standard by which Post-Punk bands are held to. Nonetheless, when I first came upon the band IDLES album ‘Joy As An Act of Resistance‘, I was completely intrigued.

The album art told me that I was going to play this album on repeat. ‘Joy As An Act of Resistance‘ is the sophomore album from the Bristol, U.K. Post-Punk (gag) band IDLES. Released on August 31, 2018, through Partisan Records, this 42-minute venture is absolutely encapsulating.

The album starts off with “Colossus,” a five-minute track that is sonically harrowing. The atmosphere feels almost like a soundtrack for Armageddon. It creeps along with the clicking of drum rim hits and sporadic guitar rumbles. Joe Talbot snarls out lyrics that are equally brash and crisp. As the song continues, it gains more momentum and intensifies. Then, silence. The arrow has been drawn and, after what seems like an eternity of empty space, the tidal wave crashes. An explosion of raw and untameable drum fills, nasty riffs, and anthemic vocals.

My personal favorite track, as well as a nomination for best song title of the year, is “Never Fight a Man with a Perm.” This song is an outright audible adrenaline rush. The beast opens with shrieking guitars and trampling drums. I have to take a minute to express my pure adoration for the rhythmic excellence on this album. Every hit and fill is expertly arranged and placed, displaying raw power and technical prowess, while simultaneously keeping the focus on the project as a whole, rather than stealing the show. So far, the chorus of the song is one of my favorites of this year, changing the pace from the verses and enveloping the listener in sheer fire. I never dreamed that “concrete and leather” would be so fun to sing along to.

Taking a slight break from the raw intensity, the third track, “I’m Scum,” is a fun, FIDLAR-esque diddy. The Oi! influence is clearly displayed here, despite the impeccable production. In the midst of relishing in being “dirty, rotten, filthy scum,” the instrumentation is fantastic, especially with the interluding guitar riff that feels just like something out of a skate rock track, it glues the entire track together.

It segues perfectly into the next track, “Danny Nedelko,” a punky, bass-driven ballad about immigration and acceptance. The song offers an earnest, more personal take on an issue that has been a worldwide debate. Politics aside, the song is sonically fantastic.

“Love Song” is a grimy, nihilistic take on radio-friendly bubblegum pop tracks. Atmospheric and steadfast, the song creeps along until it breaks into the chorus, bursting into a ball of fire. “Look at the card I bought, it says I love you.” I have to say, I truly love the songwriting coupled with how incredibly ferocious and dynamic the vocal work is.

‘Joy As An Act Of Resistance‘ – Tracklist:

“June” is the terrific black sheep of this record, practically the climax. One aspect truly unique about this song, in particular, is the use of clean vocals through its entirety. IDLES references Ernest Hemingway’s famous short story, using “Baby shoes for sale, never worn” as a motif to create sadness that is almost welcoming. Keys play ethereal chords that create the landscape for which the accompanying instruments build upon, pushing the listener to be a participant and not just an observer.

I really have no choice but to love this album, with songs like “Samaritans” forcing me to. The percussion almost dances and the guitar work weaves its way in and out of prominence, only making itself the focal point when it needs to. The track itself is a satire of masculinity with lines like, “Man up, Sit down, Chill Out, Pipe Down, Socks Up, Don’t Cry, Drink Up, Just lie, Grow some balls,” begging us to question modern virility.

“Television” is a song that’s really, well, anti-television. Personally, I feel like the lyrics on this track are just a tad bit self-congratulating, however, the production and instrumentation are too good to dislike. There seems to be an element of ska specifically on the guitar, with shiny chords peaking over the entire track. It works perfectly, especially as a way to introduce “Great,” which if there is any car karaoke worthy song, it’s this one. This is another politically-charged track, with the band showcasing its doubt on British leadership conflicting with their personal stance on acceptance. The song tramples its way through its entirety, allowing for the truly incredibly sing-along worthy chorus to shine blindingly.

Anyone that is a fan of hardcore is going to love “Gram Rock.” The production is dirty and rough, allowing for the raw intensity of the instruments to create a visceral heatwave of a track. I also have to share my love for the lyric, “Ten points to Gryffindor.” God, this album is fantastic.

Even as the album winds down, it fails to lose any of its energy. “Cry To Me” delivers a churning, gritty track about loneliness, smeared in snarky vocals, combusting guitar and bass work, and roaring percussion. “Cry To Me” stays dynamic and unique, without straying from the theme and overall structure of the album.

Concluding the project is “Rottweiler,” a song that I believe perfectly describes the band itself. It’s the perfect fast-paced punker jam that will have anyone on their feet in a second. Everything aspect of this song is arranged as it should be. Every instrument dances in its own way, but to the same beat.

I can’t explain what makes this album so fantastic, simply because my words wouldn’t do justice. The lyrics, instrumentation, production, message – I am truly mesmerized by the sheer magic of this band and their project. What I find unique is that every song follows a narrative sonic structure, with each track having exposition, rising and falling action, climax, and resolution. This album feels like a story. IDLES has done nothing less than create a classic to behold.

Order ‘Joy As An Act Of Resistance‘ [HERE]