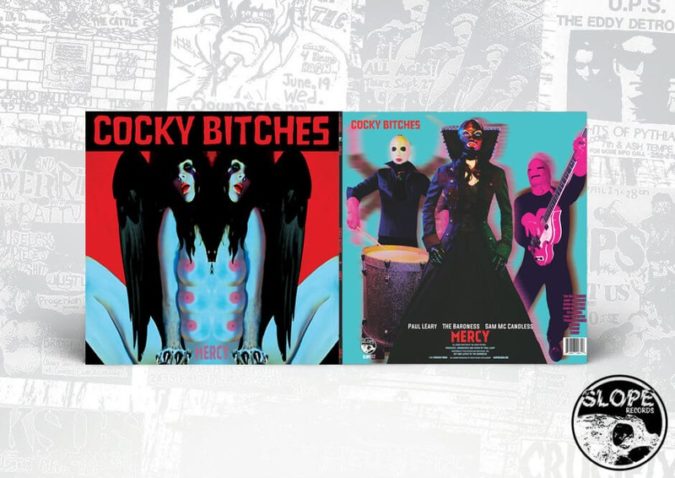 Let me start by getting the following out of the way, and why I am doing so will make a lot more sense here in a minute: I am a huge fan of the eclectic musical mindfuck known as Butthole Surfers. My love for them began in the early 1980s, about the same time that I began to experiment with LSD and other consciousness-altering substances, ironically.

C’mon now, none of us are truly innocent or angelic, now, are we? Yeah, that’s what I thought. So, imagine how my interest was recently piqued by the discovery of COCKY BITCHES, a band laying claim to Paul Leary, founding guitarist and producer of Butthole Surfers. Oh, and guess what? The band’s personnel based intrigue doesn’t end there, no, there is also drummer Sam McCandless, a founding, former member of Cold (Yes, THAT Cold).

Rounding out the trio is the member I know the least about, but one no less important, and she is definitely one that I find quite fascinating, Baroness (aka Formica Iglesia). I have learned that she likes goats… I like goats, too. So, perhaps we are kindred souls, ones that share a mutual appreciation of the genus Capra, of the family Bovidae. Who knows?

I will tell you what I do know, COCKY BITCHES will turn the psychedelic rock world inside out when they drop their full-length début, ‘Mercy’, via Slope Records on November 23rd. The new album is the follow-up to their 7″ EP, 2017’s ‘T.V.’s Ok‘, and the only two official releases from the band that started out as Carny a decade ago.

So, let me tell you something else I know, it is no easy feat to describe the aural output of COCKY BITCHES to someone who has not heard them yet. That’s quite an admission for me, someone who has a proficient grasp of vocabulary and at least somewhat of an imagination, but I won’t sell myself short by not at least giving it the ol’ college drop-out try!

You yourself will have to try to exhibit some imagination too, so, still your breathing, open your mind’s eye, and let us dive deep into the psychoactive pool that is the contents of ‘Mercy‘. Our submersion begins with the heavily hormone-charged, blues-infused, coitus cabaret of “Sex Machine“. A sludgy, slowly pulsing cadence that begins with the unmistakable, Paul Leary signature sounding, effects-heavy guitar emission and from there, rolls out a sultry discharge of double entendre-worthy lyrics from Baroness.

Don’t try to imagine this track too strenuously as you are in luck this time, you can stream it here:

With each new track loosed upon us, fountains of fierce, outside-the-norm music sink its claws and fangs ever deeper into our being. Gnawing and devouring away with such sonic secretions as “Jump Jane Crow” (streaming below), or the simmering bite of “Burn Baby Burn“, another incendiary inferno of molten audio. Airborne lava rippling with wave after wave of sound effects, synths belch forth their position, while the drums stagger about to and fro, like the victim of a powerful inebriate.

We arrive at one of my personal faves from the album, the moving “Hand In Fire” is an alluringly hypnotic ditty, indeed. Thick riffs drive the song right from the start and soon a rhythmic drum pattern is produced, while the vocals… well, the vocals. Baroness bounces from one mode to the next with enticing ease, from angelically-toned, repetitive cleans akin to a chant at times, to more intensely aggressive, throatier ones – and this is all while some demonic sounding male bellows right along beneath.

It is here that we get a slight breather with the brief interlude piece, “Eela Moira“. It is a calmly tranquil insert that, despite its brevity, works quickly in altering the whole dynamic that has been built by the previous tracks. Then, to me, what comes next is a number quite reminiscent of Leary’s other band, the Butthole Surfer-ish “Free The People” is a very minimalist construct. Noise, guitars, noise, shouted lyrics, noise, drums, noise, noise, noise… damn, it is so liberating!

Liberation is a good point to expound upon, in fact, as COCKY BITCHES are clearly unconcerned with the limitations of conventional music. Instead, they exercise the true freedom of the creative spirit, going where it leads them, laying down that which is inspired by it, unsullied by outside expectations. I mean, seriously, who can make a song about grocery shopping sound as freaking damned good as the one here does (in part, due to more of Baroness‘ patented, dually interpretive lyrics)? “Produce” is a semi country-western cut, musically, one with twangy, tremoloing guitar, and whistling.

It is the perfect precursor to lead us into the next tune, the backwoods, acid washed, juke-joint-in-hell, “Humper“. A high plains drifter of carnival organs and smooth playing keyboards, with the clamor of roughnecks riding right along to its rolling rhythms and McCandless‘ potent, stitched in drums.

Now, I feel like we have explored some alternate routes, back roads, or side paths these last few songs, mind you – good ones of course, but this last pair of tunes return to the feel of the first part of this record. Both “Rocket” and the album-wrapping title track “Mercy” are slightly straightforward, for the most part. “Rocket” is a quickly accelerating blast of uptempo guitar, powered by high-octane, in-the-pocket drumming, all tightly knit together and winding itself out. All the while, the Riot Grrrl-like vocals do their thing, adding to the punk as fuck vibe of this rocket ride.

With “Mercy“, the LSD flashback feel of things begins to waft back up, laying upon the surface of the psychoactive pool we are beginning to emerge from. It would lull us back in if we allowed it to, the melodic undercurrents of the song, the sultry vocals, the violin, and symphonic elements flavoring it, all such an inviting recipe.

Truth is, the entire hodgepodge of heady, hallucinatory stew cooked up by COCKY BITCHES and then dished out via ‘Mercy‘ is indeed delectable, yet unquestionably, a meal that may not be appreciated by all. This is the type of fare that takes a refined palette to taste and a strong fortitude to stomach, perhaps, and I mean that with the utmost due respect to the trio. ‘Mercy‘ is the type of audible sustenance that appeals to those that have a more developed, enlightened hunger, if you will, folks famished for the unusual and the unique. It is such that shall find this album, and COCKY BITCHES both, providing a smorgasbord of extensive variety.