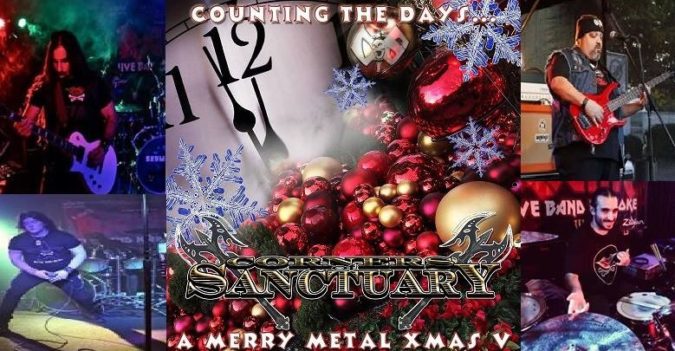 One of Philadelphia’s own representatives of heavy metal, CORNERS OF SANCTUARY, is getting in the Christmas spirit with a new recorded gift for music fans.

The fifth installment of CORNERS OF SANCTUARY‘s annual metallic merriment arrives via the recently released, six-song ‘Counting The Days… A Merry Metal Xmas V‘ EP.  It is out now from Exquisite Noise Records USA, available digitally at all major online outlets, while a limited run of CDs is also available exclusively at the official COS website HERE.

The new EP received final mastering from none other than Bill Metoyer (D.R.I., Sacred Reich, Tourniquet, Trouble), something that bassist James Pera commented on:

“Bill is our diamond in the rough. He knows exactly what we are looking for, always a great experience working with him.“

The title track of the EP, “Counting The Days ‘Til Christmas Comes”, is available as a lyric video and is streaming below. The EP also contains the non-holiday track, “Meet Your Maker”, a song that originally appeared on the band’s 2015 album, ‘Axe To Grind‘. The newly re-recorded bonus track is available as a holiday gift MP3 download at this LINK.

“The song has become a live favorite over the last couple of years and has also gone through a few incarnations since we first recorded it. We knew we wanted to capture what the song morphed into… so having an opportunity to re-record it was a no brainer for us.”

Michaels also shared the following about the band’s upcoming plans:

“We already have a large chunk of new material together for our next album. We’re excited to begin putting it all together, as we have a lot of ideas but have found the real fun is just letting things develop on their own. That’s the magic of music and we have some surprises in store for 2019.“

Speaking of upcoming plans, CORNERS OF SANCTUARY have announced a pair of early December live appearances in their home state: