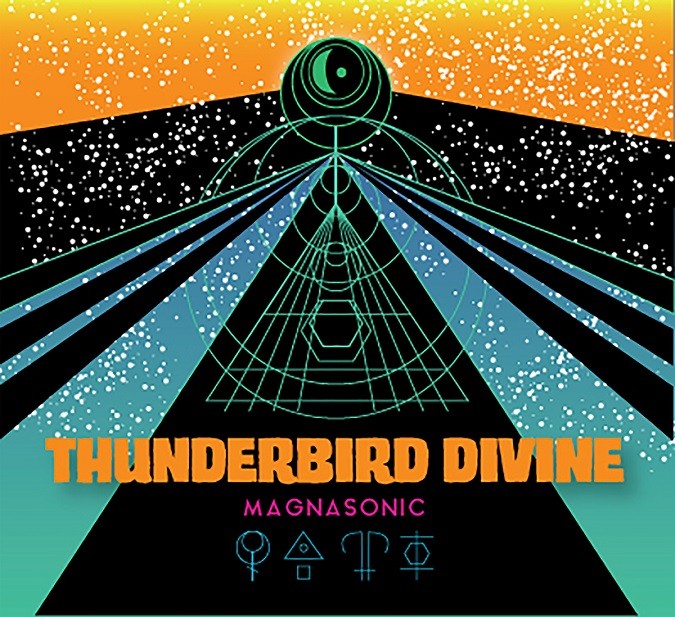 ‘Magnasonic‘ is set to be released from Salt Of The Earth Records on January 11th, 2019, and promises to be one of next year’s most exciting releases. The four-song, 30 plus-minute recording was produced by the band with help from Ted Richardson at TedAudio in Philadelphia and Charles Newman (who also mixed the album) at Cottage Sounds Unlimited in Brooklyn, NY.

THUNDERBIRD DIVINE – Adam Scott (bass / guitars), Flynn Lawrence (guitars / misc. instrumentation), Mike Stuart (drums / percussion), and Erik Caplan (vocals, guitars) – have been generating steady interest and hype since the band’s formation in early 2017. Much of that has been fueled by the quartet’s diversely outside-of-the-box, genre warping musical creations, ones utilizing uncommon elements like the marxophone, electric sitar, piano, and a variety of synths in their contents.

“A first record is often considered a band’s mission statement,” Erik Caplan says. “We feel a lot of bands’ first releases set the tone for their careers as heavy, funky, trippy, fast or sludgey, and once they do that, any deviation from the initial sound can be perceived as false or a slacking in its rock responsibilities. We wanted to come out of the gate with something diverse but representative. We wanted to leave ourselves with plenty of sonic options for the future.“

Below, you will find the ‘Magnasonic‘ album artwork (featuring a custom art design by the band’s Adam Scott), tracklist, and a non-album track promotional video for “Djinn Au Jus“. It is a perfect example of the band’s knack for making highly unique music, in this case, a meshing of early ’90s R&B with ’70s arena rock components.

“This album pulls out a lot of stops and frees us from genre limitations,” says Mike Stuart. “After this debut, our next record could be total Motorhead worship, and anyone who hears this one first should be able to hear how we got there. Not that we’ll necessarily do that, but it’s certainly an option.“

Pre-order for the ‘Magnasonic‘ album will begin on December 7th at this LINK.