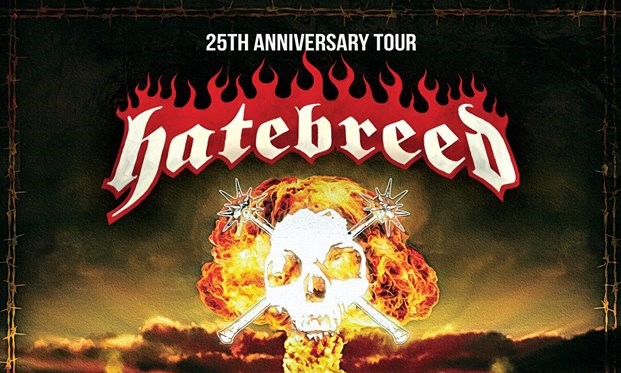 Twenty-five years of HATEBREED! Just allow the significance of that statement to sink in for a moment; the realization of the band’s lengthy existence and their overall impact.

Yes, the Connecticut based HATEBREED has been the source of ruthless hardcore music – upon albums, on stages, and in mosh pits around the planet for a quarter of a century now. With their blue-collar, working-class anthems and poignant lyrics, HATEBREED has graced metal fans with eight albums and consistently sold-out shows for years. Come 2019, they will celebrate it all by embarking on a 25th anniversary U.S. tour!

The support revealed for different legs of the trek is also a stunning revelation. The first leg sees OBITUARY and CRO-MAGS along for the decimation. Then, TERROR and FIT FOR AN AUTOPSY will come on board for the second leg, rounding out this juggernaut of a tour. Along the way, select dates will see acts like Bleeding Through, Asesino, Strife, Municipal Waste, and others getting in the mix of this do-not-miss live campaign.

Members of several of these high-profile acts offered words about the planned trek, with HATEBREED‘s Jamey Jasta commenting:

“I can’t believe it’s been 25 years already! We’re excited to bring out this massive tour package with some of our favorite bands. Every band on this bill is a headliner in their own right. The show will be run festival-style with bands you don’t want to miss playing early. Activate the pit!“

“We are excited to be invited to HATEBREED‘s 25th anniversary U.S. tour and super honored to be a part such an awesome lineup,” states OBITUARY drummer Donald Tardy. “Looking forward to throwing down each night with them and bringing some of our southern swamp metal to this tour. Gonna be sick!“

“HATEBREED‘s 25th anniversary tour is gonna be a banger — the CRO-MAGS are psyched as fuck to be part of it,” proclaimed frontman John Joseph.

“The lineup for this tour is insane,” said TERROR frontman Scott Vogel, echoing the same sentiments as the others. “We are very much looking forward to being on this run with some of our favorite bands.”

The itinerary for this amazing tour is below, while tickets for the first leg of it went on sale this past Friday, November 30th [HERE].

* With BLEEDING THROUGH, ASESINO, STRIFE
** Featuring MUNICIPAL WASTE (No OBITUARY)
^ No OBITUARY