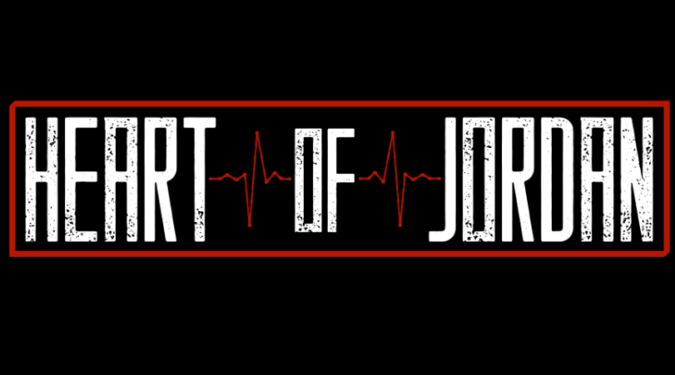 From The Wolverine State of Michigan comes the modern metal hybrid that is the band HEART OF JORDAN, with their recent self-titled, full-length début album.

I use the term “hybrid” because that is exactly what this band is, the evolutionary next step in contemporary metal, one that melds many stylistic influences into their own audio state. From alternative to melodic thrash, metalcore, screamo, and more, HEART OF JORDAN – Preston Mailand (vocals), Elijah White (guitar), Eric TenEyck (guitar), and Andrew Everett (drums) – deliver electrifying music, chock full of energy and emotion. Dan Fell played bass on the album and has since exited the band; HEART OF JORDAN soon will be announcing their new bassist.

It comes with wide-ranging dynamics, too, ones with more mellow, low-key, and subtly served elements that gradually reach a critical mass and explode in an unbridled sonic output. Some of the best examples of such occurring upon this studio outing are the intro song “Throne Alone“, along with “No Escape” and “Your Vengeance“. Each is laced with profound elements, ranging from solid, underlying rhythms, hook-laden guitar riffs, and some truly powerful vocals embellishing them.

Then there are the straight forward, unhinged forays into heavier, high-octane metal from the band, as well. Numbers like “Schizo“, “Deny“, and “Your Vengeance“, is simply magnificent. In fact, “Deny“, and the song “Deaf Ears“, are my favorite cuts from the record. Both are intensely delving into searing heaviness, and each is constructed with fierce guitars driving them forward.

“Deny” possesses striking drum work, wound tightly throughout the song, which, by the way, also contains some massively aggressive vocals at times. They variate between throatier passages and ones where a blatant hardcore type styling, the same approach taken on “Deaf Ears” also, yet with more death metal-ish gutturals, too.

It is always an enjoyable experience to discover a multifaceted band like Lansing’s HEART OF JORDAN, one that is able to warp myriad influences and musical styles into their very own potent aural elixir. Never staying too long within the confines of any one particular type of music, instead unconsciously exploring aspects of multiple ones at any given time in their own compositions.

Stream the self-titled introduction to HEART OF JORDAN in this review or head over to Bandcamp [HERE], where it is available for further streaming and purchase.