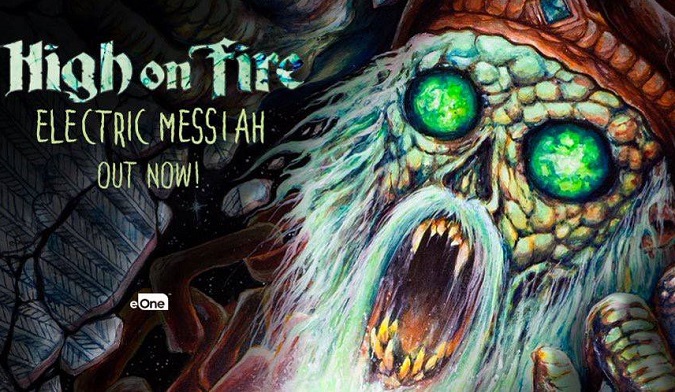 California’s HIGH ON FIRE has announced a North American tour set to take place in January and February 2019, in continuation of support of their newest album release, ‘Electric Messiah‘.

These dates will be the band’s first live performances since they were recently forced to cancel participating in the “The Speed Of The Wizard Tour 2018” (w/ Municipal Waste, Toxic Holocaust and Haunt). The reason for HIGH ON FIRE‘s exiting of the trek was due to the partial amputation of frontman Matt Pike‘s toe.

Additionally, HIGH ON FIRE will once again perform at the 2019 edition of Psycho Las Vegas, set to take place August 16 – 18, 2019, in Las Vegas at Mandalay Bay Resort. Ticket info HERE.

‘Electric Messiah‘ was produced by Kurt Ballou (Converge, Torche, Kvelertak), his third such with the band – Matt Pike, Des Kensel, and Jeff Matz. The album is out now from eOne Music (Entertainment One Music). Just yesterday, it was announced that ‘Electric Messiah‘ and HIGH ON FIRE were nominated for a Grammy for ‘Best Metal Performance’. Hear it for yourself, we have it streaming below via Spotify.

The touring itinerary is listed below, while it is expected that support acts will be announced soon.