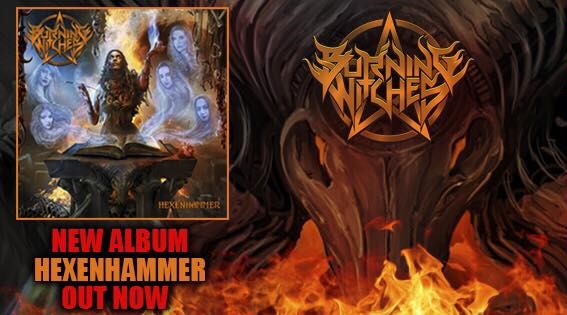 Singer Seraina, guitarists Romana and Sonia, bassist Jay, and drummer Lala released a self-titled album in 2017, and ‘Hexenhammer‘ (“the Hammer of the Witches” in German) is the follow-up via Nuclear Blast. And it’s the most impressive, straight-ahead metal album I’ve heard in forever.

“Open Your Mind” is a very subtle political commentary on the climate at hand (“There is no redemption in hate / No matter how hard you try”), and the chorus coalesces that (“Open your mouth against human incompetence / Don’t spread the lies to drown in your own hate”). It’s a comment on gun violence (“You don’t want to sacrifice your child / If you let them play with a gun”) and a pointed message about cults of personality (“Sometimes it’s easier to follow a liar than to find a way in bitter truth”). It’s laden with superior guitar harmony and Seraina’s final shriek drives the point firmly home.

The double meaning of “Man-Eater,” in the wake of the two previous tracks, is not only devilishly clever but serves to lighten the mood significantly. Seraina’s chuckle midway through shows she’s completely in on the joke, delivering lines like “Stay for dinner / It’s only for invited guests and you’re the winner” with a wink, a leer, and a bit of a slaver. It’s terrific.

Who would have thought that the mantle of the mighty Priest would be taken up by five Swiss women? They have earned the right to drape it over their shoulders in spades – ‘Hexenhammer‘ is just a brilliant effort.