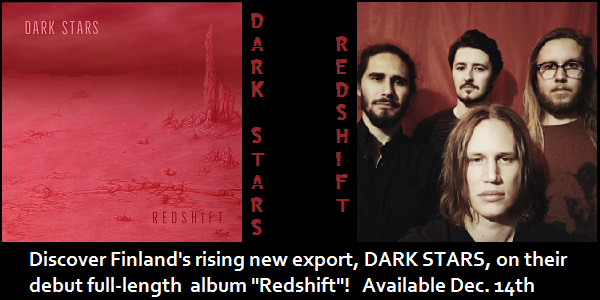 Finland’s retro-heavy, psyche rock band DARK STARS announced that they will share an exclusive, pre-release stream of their new album, ‘Redshift‘, via The FuzzHeavy Podcast on Wednesday, December 12th.

The FuzzHeavy Podcast (hosted by Marcus “Greybeard” Prusiner) will be playing the entire album for listeners and fans ahead of the official release on December 14th. ‘Redshift‘ is DARK STARS‘ first album since the band became a four-piece and is the follow-up to the band’s incredible 2015 introduction, the ‘Electric Love Machine‘ EP.

The first singles to surface from the new album, “Save Your Soul“, “The Shades” (streaming below), and “Mirrors For Eyes“, are quite alluring as each ripple with DARK STARS‘ knack for solid songwriting. Sometimes upbeat, sometimes tranquil and sedate, the band – Paavo Korvenmaa (vocals and bass), Janos Cheshire (drums), Lauri Niemelä (guitar), and Anibal Castillo (guitar) – craft cuts that channel vintage vibes with undercurrents of hypnotic heaviness.

DARK STARS have gone on record about their upcoming ‘Redshift‘ album saying:

“[‘Redshift’] is a tribute to the pioneers and visionaries of psychedelic rock and a bow to the personality-scaping effect these influences have had.

There’s Jefferson Airplane, Blue Öyster Cult, 13th Floor Elevators, and even a hint of 70’s guitar heroes like Rory Gallagher. The influences are from the past, but Dark Stars gaze is strictly set on the future.“

Hear those influences in full swing when The FuzzHeavy Podcast premieres the full-album stream of DARK STARS ‘Redshift‘ this Wednesday, December 12th – beginning at 6:00 A.M. GMT, with replays on the 6’s [i.e. noon (12:00 P.M.) and 6:00 P.M. – GMT], continuing until Monday, December 17th. The album release will be available everywhere on Friday, December 14th.