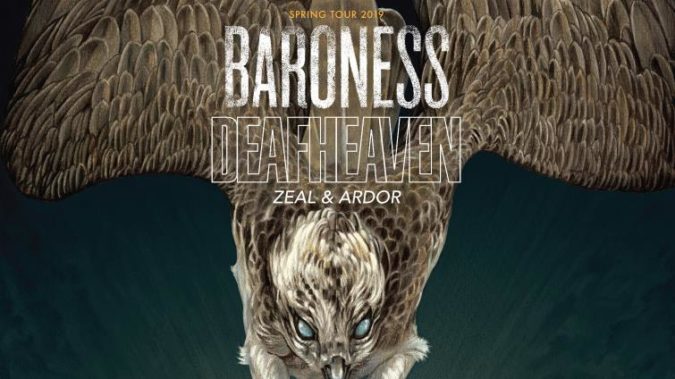 In a live performance package that promises to be one of next year’s more unique experiences for music fans, BARONESS and DEAFHEAVEN will unite on a co-headlining trek together in early 2019.

The spring tour, where Zeal & Ardor will provide direct support to the pair of prog/post-metal entities, will launch in Houston, TX on March 8th and spend five weeks out on the road. It will wrap in NYC on April 12th and marks the Grammy-nominated BARONESS‘ first continent-wide trek in nearly three years.

Tickets for this tour will go on sale at 10:00 A.M. local time, Friday, December 14th – available at this LINK.

BARONESS is currently working on their fifth studio album, their first with the band’s new guitarist Gina Gleason, who stepped into the vacant slot amicably left empty by Pete Adams in 2017.

DEAFHEAVEN, also nominated for a Grammy this year, will be continuing their support of their latest, critically acclaimed album release, ‘Ordinary Corrupt Human Love‘.

Zeal & Ardor will also be supporting their own well-received 2018 release, ‘Stranger Fruit‘, as well.