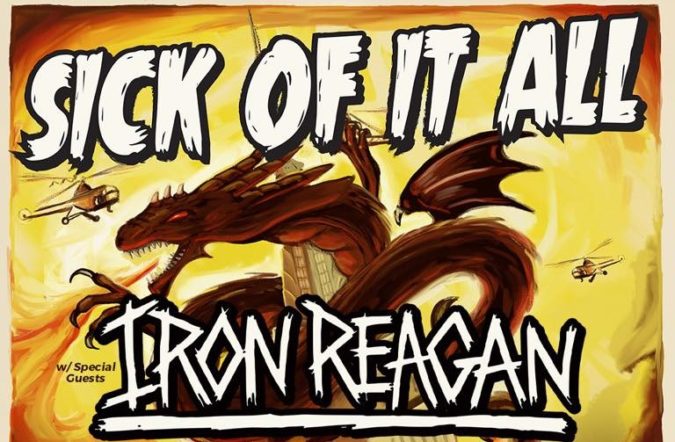 Revered NYHC band SICK OF IT ALL and RVA’s crossover crazies IRON REAGAN announced they will hit the road together on an eastern U.S. tour in March 2019.

SICK OF IT ALL will be touring in support of their new album, ‘Wake The Sleeping Dragon‘, which was released from Century Media in November. IRON REAGAN will be supporting their own recently released EP for Pop Wig Records, ‘Dark Days Ahead‘.

Find the tour’s itinerary below, while tickets are on sale now at this LINK.

In SICK OF IT ALL related news, the band will appear at next year’s 12th annual Musink Music Festival & Tattoo Convention in Costa Mesa, CA. Other acts set to perform include Suicidal Tendencies, Anti-Flag, Limp Bizkit, Hatebreed, All Hail The Yeti, Bleeding Through, Fear, T.S.O.L., Dead Kennedys, Voodoo Glow Skulls, and more. Find all info you need, as well as purchase tickets and weekend passes, HERE.