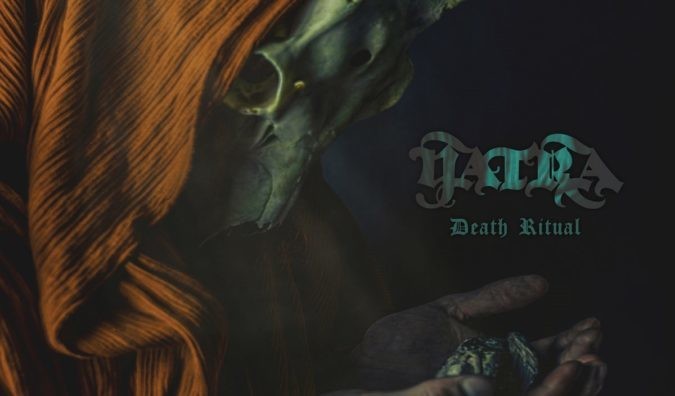 On January 4th, in the year of our dark lord 2019, the new year’s first legitimate heavyweight album release of the latest Gregorian calendar cycle will arrive when Maryland‘s YATRA drop their full-length début. Arriving from Grimoire Records, the eight-song slab of life-taking audio, ‘Death Ritual‘, drops like a proverbial ton of bricks.

As the recipients of this injurious rendering – from guitarist and vocalist Dana Helmuth, bassist Maria Geisbert, and drummer Mike Tull (who has since departed the band and a new kit man Sean Lafferty has embraced) – you nor I are likely to forget how fantastically 2019 started, when it comes to album releases, at this same time next year – assuming we survive it and all that.

Anticipation for the proper studio offering from YATRA has incrementally grown with the band’s ongoing live presentations. Keeping a minimal amount of music readily available online, YATRA has cultivated an intriguing mystique about themselves as an entity, but I am here to tell you all that soon you shall praise the name of this shadowy enterprise.

In Hinduism, “Yatra” means “journey” or “procession”, and is generally associated with pilgrimages to holy places and sacred sites. Now, this is not referring to somebody’s cross-town drive to their local McChurch on Sunday. No, for in this belief system, the journey itself is as important as the destination, and the hardships of such travels serve as an act of devotion in themselves.

These same notions are applicable to the YATRA we are here to witness and experience, by which we seek to draw closer to the divine by means of this recording.

First things first… yes, YATRA is indeed a doom emitting act, but damn does this doom comes packaged with gargantuan groove and wrapped with massive fuzzed excess. This becomes an immediate realization with ‘Death Ritual”s introductory track, “Hour Of The Dragon“. A slow-rolling juggernaut one might describe as “sonic molasses” – dark and sweet sludge.

There is nothing esoteric or hard to understand about such resonating densities as “Black Moon“, or the Sabbathian homage to ritualistic vegetation, “Sacred Flower“. Established upon concreted foundations of riff and rhythm, cohesive and flowing throughout the audible mass exuded, this is a most unholy fusion at its very finest.

On each track, Helmuth’s vocals add to feeling the presence of an impenetrable sinisterness, an unwavering malevolence by means of hellish verbiage. When melded with the music that carries them aloft, songs such as “Snakes In The Temple“, “Four Directions“, and “Mighty Arrows” are enthralling examples of aural decimation by means of ethereally imbued refining.

For me, some of the album’s finest moments come within the confines of two particular tracks, “Smoke Is Rising” and “Sailing On“. Both are behemoths of considerable mass, rampaging aggregates of guitar, bass, drums, and voice, yet such assembled with captivating nuances.

In fact, “Smoke Is Rising” may just be the ultimate from YATRA so far, its lumbering plod a trudging crush of obese guitar and broad rhythms, plus that hella tone-rich solo!

Most everyone knows that Maryland doom is a “thing”, a much-loved, long-running, and well-established one, too. Now, Ocean City’s YATRA is rising from the sea coast like a gigantic Kraken crafted of instruments and determination, dispensing destruction by means of the ‘Death Ritual‘ album.

The album was recorded, mixed, and mastered in August of 2018, by Noel Mueller and YATRA. It will be issued from Grimoire Records on January 4th… sacrifice yourself unto it then!

YATRA will be appearing at these upcoming live events: