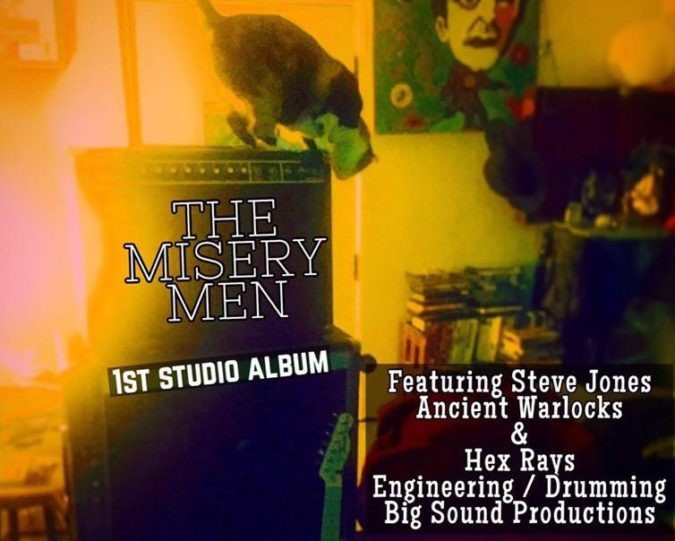 From the Pacific Northwest area of the United States comes ‘Deathspiration‘, the début EP from Portland, Oregon’s THE MISERY MEN, released just a little over a month ago in December 2018.

I’ll be honest, when I first saw the band’s name, as well as the title of their record, I kind of assumed this was going to be of a death metal musical styling. It is instead quite the opposite, as THE MISERY MEN – currently the duo of guitarist and vocalist Corey G. Lewis and drummer Steve Jones (also of Ancient Warlocks) – manage to meld a bevy of expressive audio types into their own unique output. For the record, the band has not always been relegated to a two-piece status, at times have seen an increased membership that has included Ric “R.J.” Parnell (Atomic Rooster, Spinal Tap), Jay Erbe (ex-Disenchanter), Brad Frye (Red Mesa), Brad Lewellyn (Devil Riding Shotgun), and others.

However, for the ‘Deathspiration‘ EP it is Corey and Steve and the pair seem determined to keep things as low-tech and D.I.Y. as possible. They avoided using any studio-type “trickery” in capturing the EP, instead, Steve recorded and mixed it using analog tape on a 1″ 16-track machine, while foregoing any auto-tuning, click tracks, digital plug-ins, overdubs, or what have you.

In the span of these five songs, THE MISERY MEN exude psychedelia-tinged desert rock and sludgy doom, like that of “C.W. Sughrue” and its preceding primer, “C.W. Sughrue (Intro)“. Hella fuzzy, greatly grungy, and occasionally chunked up with some punkified attitude, this music is truly the alternative to alternative rock. The plodding, Melvins-esque heavyweight “Harness The Darkness” eventually arrives, serving as a sort of halfway point, yes, but it also appears to slightly mask a turning point too.

The pair of tracks on the latter end of the record, “Night Creeps In” and “Stoned To Death“, are decidedly a bit headier at their hearts. The former, “Night Creeps In“, is a slow, crawling discharge of a dirge-like nature, the guys weaving an aural blanket of dark, gothic nuances throughout this number reminiscent of Danzig-meets-Type O Negative.

With “Stoned To Death“, we get the stand-out selection on the EP, in my opinion, one that begins rather bleakly but soon heads into a sweltering bog of bluesy quicksand. A chunky, lumbering stride, along with the song’s pulsating riffs, choppy drums, and tortured vocals are the ideal vehicle to convey the message that there is more than enough anguish to go around.

Make THE MISERY MEN, and their recently issued ‘Deathspiration‘ EP, your own private muse of misfortune and woe by streaming the album above in this review. If you fear that may not suffice, you can find further streaming and purchase options at Bandcamp.