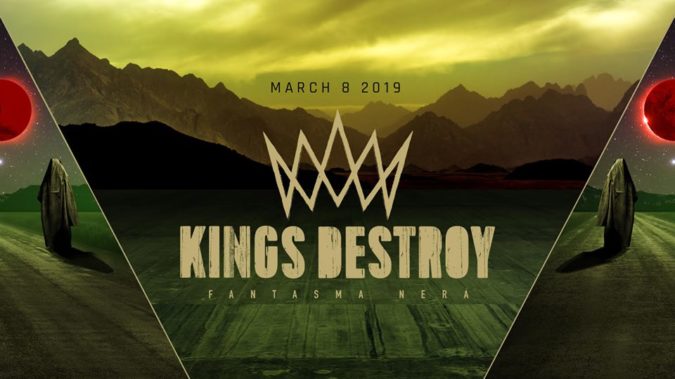 The quintet will release their new full-length studio album – the first in four years, ‘Fantasma Nera‘, on March 8th via Svart Records. Though at this time the details connected to the upcoming offering are limited, we do have the album’s artwork and tracklist being revealed here, along with another item or two.

‘Fantasma Nera‘ was produced by Dave Bottrill and that fact alone is plenty to fuel expectations that the album will likely be a major milestone outing for KINGS DESTROY. Bottrill’s work with such acts as Tool, King Crimson, I Mother Earth, Coheed And Cambria, Soen, Stone Sour, and many others, has established him as someone that gets dynamic results from the artists he works with.

This fact is something that the members of KINGS DESTROY also addressed with guitarist Carl Porcaro offering:

“We upended our usual approach in creating this album. We’d been playing together for so many years, and all of our previous albums were the result of us hashing out the ideas in rehearsal and learning to play the songs live prior to going into the studio. For Fantasma Nera we put the songs first and let the material dictate the means by which the album was created. Producer David Bottrill (Tool, King Crimson) helped us find new creative approaches, and this resulted in an album that doesn’t sound like anything else we’ve ever done.”

“We challenged ourselves to make the best album we could… and we left our guts on the table. When I finished the vocals on this album, I was mentally and physically broken from the effort. I did not sing again for two months after it was recorded. I owed that effort to my bandmates, and they did the same for me.”

Pre-order for ‘Fantasma Nera‘ will be announced soon, along with North American tour dates. KINGS DESTROY recently confirmed that they will be performing at this year’s edition of the world-famous Maryland Doom Fest (sponsored in part by Riff Relevant) held from June 20th – 23rd in Frederick, MD. Find more info, ticket purchases, and other details on the Maryland Doom Fest.