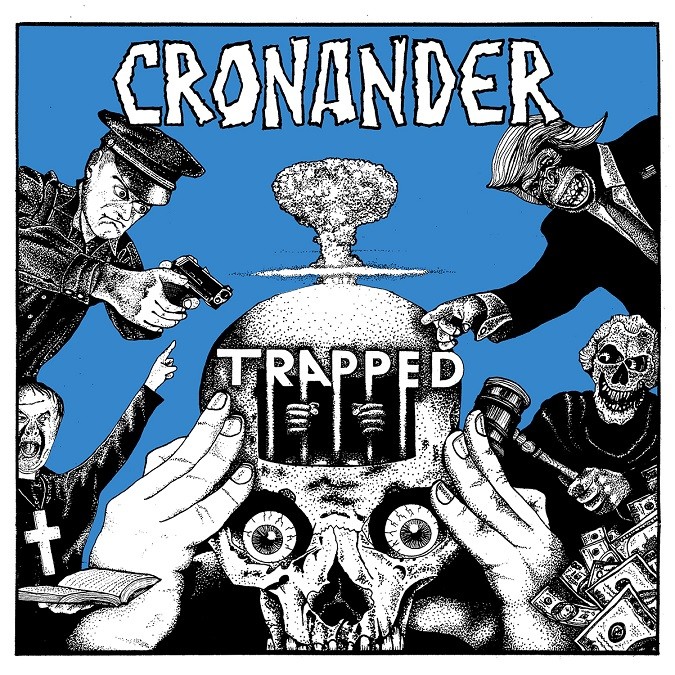 Oakland, California, and the San Francisco Bay Area have their own wing in the library of music history. Many of us know the quintessential bands born of the Bay in the various heavy genres. History happens every moment, however, with new bands forming and migrating with the winds to bloom up each year.

With their beginnings in Southern California, CRONANDER traversed north to Oakland to plant themselves among the rich fields of musical history. This “new-ish band of kind of old guys” that make up the quartet of CRONANDER is flourishing in such cultivation. Seeds sown in prior acts such as Strung Up, Annihilation Time, Owl, and ANS; they mutated into a sound stemmed from root influences of ’80s SoCal punk and hardcore, Bay Area metal, skatepunk, and ’70s heavy rock, and such reaping brought CRONANDER a high-energy flavor all their own.

An aptly titled ‘Demo‘ in 2016, with a follow-up EP ‘Executive Disorder‘ in 2017, Cronander is now refined and thriving to a full season in 2019. Their first full-length album ‘Trapped‘ is arriving on Saturday, February 23rd via Annihilate! and Stop Go Destroy. Riff Relevant has the first taste from this début for you, by way of an official video première for the track “P.O.S.“

I got a wide smiling kick out of their video and the song brought me back to the nostalgia of my three-a-week hardcore punk show memories (blurry, yet still golden)… The official video was created by Steve Dexter at Sublight Cinema, with live footage by Chris Winn at Rat Face Photos. The band shared some details about the new song “P.O.S.” and their intent of the video:

“P.O.S. is about people’s dependence on technology (mostly smartphones) and the convenience it creates. We wrote it because we felt like real experience was being replaced by social media presence and how that has made us more than willing to give up basic rights in the name of Almighty Convenience. Big Brother is bigger than we could have imagined and people have signed up for their own surveillance. That being said, smartphones can be very useful and there’s no doubt people will be watching this video on them. But there is a fine line between connection and addiction.”

‘Trapped‘ will be available on CD and Cassette [LINK] and Digital download and streaming [LINK] beginning Saturday, February 23rd.  To celebrate the new record, CRONANDER has an album release show set for the same date in Oakland, information is below (click the date for more details):