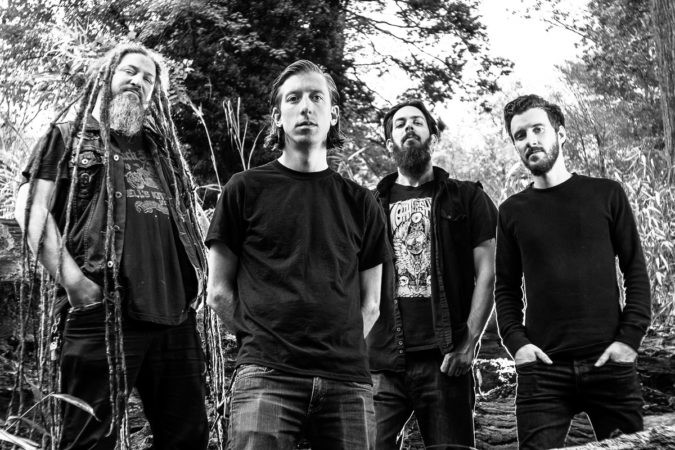 Without question or doubt, 2019 was launched with what is one of its most highly anticipated and unique releases, the début offering from Philadelphia’s THUNDERBIRD DIVINE, ‘Magnasonic‘.

Arriving only a few weeks ago from Salt Of The Earth Records, the album serves as proof positive of the immense talents of its creators – guitarist and vocalist Erik Caplan, drummer/ percussionist Mike Stuart, guitarist and instrumentalist Flynn Lawrence, and bassist and guitarist Adam Scott – who only united within THUNDERBIRD DIVINE in March 2017. The fact that less than two years later, the quartet bestowed greatness upon the music-loving masses in the form of ‘Magnasonic‘ speaks (in) volumes as to the extent of those talents.

Too much? I think not, and if you have experienced this four-song amalgamation of heavy riff rock, metallic sludge, and experimental punk psychedelia, then you too already know the scope of its power. It ripples with waves of influence that bring to mind such greats as Clutch (think self-titled album), Solace, Red Giant, or Sixty Watt Shaman. Yet, for every inspirational nuance channeled, there are countless other elements of experimentally untethered developments rendered from the pulling out of all stops.

That initial catalyst of cut loose careening begins with the intro track “Qualified“, which begins with a brief bit of subtle middle eastern vibes before it catapults us headlong into the mire. Enmeshed within speaker rupturing riffs and prudent grooves, we are hurled ever deeper into a subsonic storm of fiery guitar discharges and evolving vocals, including gang-shouted choruses. There is an eventual break in the song’s aural trajectory that takes us into a free-floating haze of psyche-augmented aspects. Here, thunderous basslines, accentuated drums, and an electric sitar is soon tempting us with lysergic treatments before an explosive reprise of the incendiary guitars brings an end to things.

Cymbals and bubbling synths announce the start of song number two, “‘Til Shiloh“, soon giving way to a bit of chunky blues and aggressive vocals. The latter lay almost in contrast to the music taking place, shouted blasts of the song’s title are delivered in tit-for-tat type trade-off vocals between Caplan and a guest, Kermit Lyman III (Sheena & Thee Nosebleeds). Meanwhile, the sonic vehicle by which they travel is an oscillating cycle of smoking guitar runs and superb drumming.

With two down and two to go, where we will go now is the phenomenal third track, “Bummer Bridge“. This throttling tune is a transitional path of passage between a torrid, funked-out stew rife with guitar jamming and organ flourishes that soon crosses over into a sweltering, metalized barn-burner. Not sure what or where the bummer part is, or might be, in this blistering stand-out, but trust me, this bridge is thoroughly burnt by the time this song ceases.

This brings us to the fourth and final selection, “The Devil’s Hatband“, which also features another guest, Clamfight’s Andy Martin contributing vocals. But not before a slightly spacey flavored start takes us by the hand for the first couple of minutes, setting the mood for what looms ahead. With a tone-rich guitar that would make Tim Sult envious, the heaviness soon comes rolling in and we are quickly upon our way into the fine, rockin’ recesses of this one. At almost 11-minutes running time, the T-Bird Divine crew would impress even Richard Blackwell with their fine sense of well-dressed fusion and ability to accessorize within a song whose title references infernal headgear.

There you have it! The Keystone State’s THUNDERBIRD DIVINE obliterates the same old, same old status quo with their discernibly opulent ‘Magnasonic‘. Forging their own way forward without any concern for genre-limiting prerequisites, their introductory effort is one that embodies deviation from the norm and doing what feels right to those that are most important… themselves.

If others happen to dig it, which I do and believe you shall too, I’m sure they will not mind… so come find out! You can stream ‘Magnasonic‘ now in this review or head over to Bandcamp for further streaming and purchase options.

‘Magnasonic‘ is out NOW from Salt Of The Earth Records and available to purchase at their webstore.