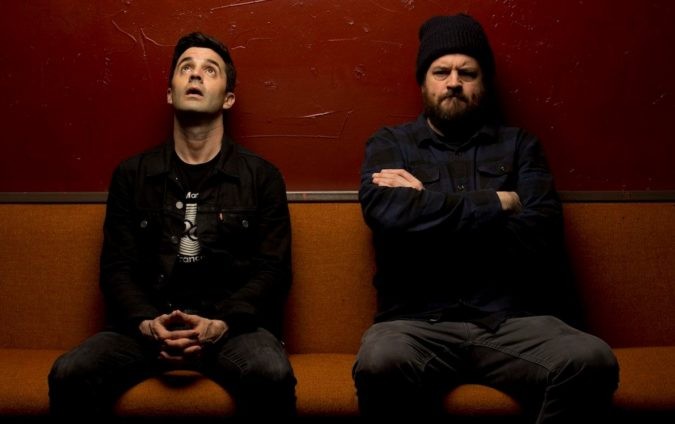 Los Angeles, California‘s BIG BUSINESS, one of this world’s best two-man units, creating downright fine heavy rock music. They are back with a multitude of new happenings.

The duo – Jared Warren (bass and vocals) and Coady Willis (drums and vocals) – are announcing the release of their new album, ‘The Beast You Are‘, via Joyful Noise Recordings on April 12th. On top of that, we have the now unveiled album details, pre-order, and news of upcoming North American headlining tour dates (plus their previously announced shows with Clutch).

Along with all that, BIG BUSINESS shares the first single to surface from the looming album, the track titled “Let Them Grind” is a solid outing for sure. It finds the dual-powered BIG BUSINESS channeling elements similar to those of (the) Melvins, of which Warren and Willis were concurrently members between 2006 and 2015.

Jared Warren offered the following about the song:

“[Let Them Grind] is the perfect song for any situation in which a soundtrack for suppressing blood-boiling, ear-ringing anger is needed.”

‘The Beast You Are‘ is the second album release from the band (after 2016’s ‘Command Your Weather’) since they returned to a two-piece format, after the four-person roster of 2011’s ‘Quadruple Single’ EP. Coady Willis addressed the reduction in player size within BIG BUSINESS, saying:

“It’s just better. We work faster, and we know what we’re both going for. It gives us more room to be weirder in certain aspects and try different things. It makes sense because that’s how we established ourselves in the beginning and how we learned to write songs together, it was just the two of us. Coming back to that lineup felt natural.”

It must, if “Let Them Grind” is any gauge by which to measure the pair’s latest output. Check out the new single below, along with the album details and touring itinerary. The Spring headline run kicks off on April 11th in Long Beach, California.

Pre-order ‘The Beast You Are‘ in various formats at Joyful Noise Recordings.

‘The Beast You Are‘ Tracklist:

1 thought on “BIG BUSINESS “Let Them Grind” Single Off ‘The Beast You Are’; N. American Tour”