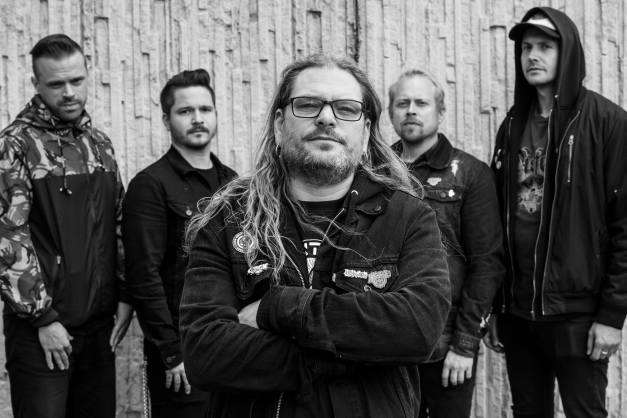 From The Sign Records comes the new four-song ‘No Escape – No Excuse‘ EP release from Sweden’s metallic hardcore warriors, SNAKE TONGUE. It was just issued February 15th, while a 7″ vinyl version will arrive on March 8th. Yes, four songs that, when combined, have a running time of less than 12-minutes – but damn, what a not-quite twelve minutes that is!

It all begins with the breakneck charge of “Corrupted Beat” (video), an intensely frenetic battery of unwavering riffs, robust rhythms, and corrosive vocals. Like a BB in a derailing boxcar, the song careens about like a pinball on nitrous oxide as it channels tinges of punk powered death metal and refuses to relinquish.

You will find yourself welcoming the slight breather that becomes the atmospheric beginning of the second song, “Dystopian Slumber.” Albeit brief, its textural embellishments are made that more enjoyable once the chugging advance of the track gets fully underway. Chaotically tempestuous, it too is mercilessly emitted with untethered aggression, especially the passages possessing a series of rapid-fire drum disbursements.

Next up is the more than appropriately titled “Derailed,” a word that is perhaps the very best descriptive to all that transpires upon this EP. However, here it is abuzz with a wall of guitar, bass, and drums, and for only a little over two minutes, this thing is going to beat ya senseless!

Speaking of beating, dead horse included, another track with a truly apropos moniker will eventually bring things to an end, “The Hammer And The Nail.” This one is a bit slower when compared to the other cuts here, it possesses a feel that seems a lot less “urgent,” in fact. That does not mean any less heavy of course, just a bit more doom oriented, with stronger sludge elements.

So, do you detect a theme here? If so, it would be one that belies savagery, through and through, and if that appeals to you, then so should SNAKE TONGUE and their ‘No Escape – No Excuse‘ EP. Find out now via the stream in this review or head to Bandcamp [HERE] for further streaming and purchase options.