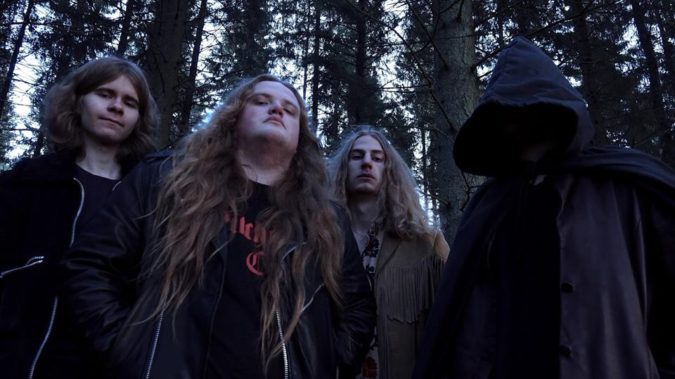 It is no big secret that we seemingly exist in an era where it has all been done before, that rarely is there something new under the sun, if at all.

Such a reality does not bode well for musicians or music in general, as it lends itself to the notion that none are capable of creating something that is actually new. But, every once in a great while, or once in a blue moon, something comes along that lives up to all the talking hype. Something that sets itself far apart from the laming herd of heaping ho-hummery out there; something that strikes a nerve within you in such a way that it cannot and must not be ignored.

This is the point where we now find ourselves dazed or even slightly addled, from the stark introduction to the full-length début from Katrineholm, Sweden’s WITCHERS CREED, ‘Awakened From The Tomb…‘ Opened to the public by Ripple Music on February 22nd, this nine-song opus is indeed a grand gesture, one whose greatest strength might just be that which has come before…

With riveting elements of everything from Pentagram or Pagan Altar, to Blue Cheer and Witchfinder General, WITCHERS CREED wears their influences out openly upon their sleeves for all to admire. From the opening track “Witchers Creed” and headlong right into follow-ups “Depths Of The Black Void” and “Victims Of Retribution“, we are transported to the early Seventies. Laden with excessive fuzz and possessed with nearly immeasurable proto-metal magnitudes, there is an unsuppressable feeling of youth and vitality to this music.

Songs like “Raven’s Claw” and the amazing “Salem (Resurrection)” are unleashed and delivered with aggressive propulsion behind them. Then, there are other tracks that are soaked with stringently lysergic enhancements, to such a degree that they achieve a mind-bending quality about them. “Larissa” and “Monolith” are certainly two outstanding examples of this.

It would seem that WITCHERS CREED is able to channel some distinctly fantastic qualities in their music, yet do so without ever seeming like clones or somehow merely copying that which has been done before. Instead, they take that which inspires them, from 70’s heavy rock to the power metal of the ’80s, and run it through their own creative machinery. From there, it is reinterpreted, reformatted, and reconstituted in such a way that it becomes a contemporary construct, new music with a most vintage vibe about it.

Time-warp yourself back to the land of lava lamps and tube amps by taking WITCHERS CREED‘s ‘Awakened From The Tomb…‘ for a spin via the Bandcamp stream in this review. You can purchase the album on CD and vinyl LP formats HERE.