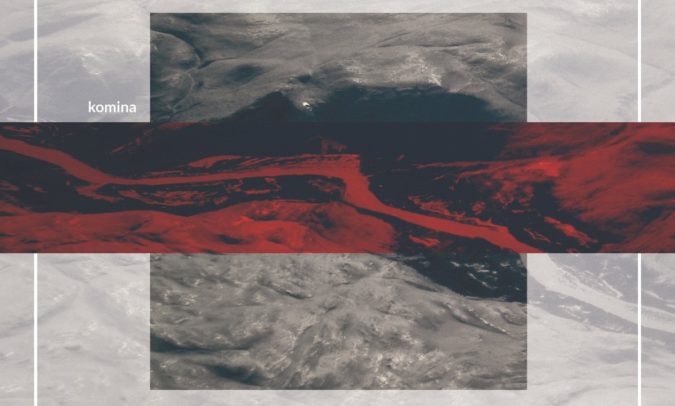 If you are a regular reader of my articles, someone who has kept up with my insights or takes on albums, bands, shows, etc., then you know how much I love an underdog!

Well, in this case, perhaps “somewhat an obscurity” may actually herald this one a bit more properly, but hell, six of one, half-dozen of the other… is there really that much difference between “underdog” or “somewhat an obscurity” in the parlance of the subterranean music jargon?! Make of all that what you may, let us gets to the revealing of this slightly off-the-public-radar entity.

Columbus, Ohio’s KOMINA – Bill Channell (bass, vocals, synths), Aaron Lowe (guitar), and Matthew Shumar (drums, percussion) – were a virtual unknown to me until recently. This was despite the fact that Aaron and I are friends on social media and we talk music often and regularly (like so many of us seemingly only live to do). It actually took another mutual friend and brother, Vince Green (THAL, wytCHord), to innocently draw my attention to the fact that KOMINA was indeed a solid manifestation in the real world.

The mid-February unveiling of the trio’s self-titled, seven-song start-up seems to have been a thing only the truly enlightened were hip to, and as is the story of my life, I was once again not one of them. It matters not, my friends. For eventually, I did receive the memo and now do my devoted very best to make you privy to said correspondence, as well.

Some music, oft-times a rare gem that passes through the sonic gulch without a lot of hyperbole and fanfare, is thus overlooked by the countless standing in the stream. Thankfully though, some grizzled, non-elitist prospector of aural ore with decades behind them does catch a gleaming glimpse of this metallic jewel and selects to explore further. What he (in this particular instance) has found here is a spectacularly stunning ornament of audibility, an instantly enthralling, crafted work set in hypnotic guitars, rhythmic glints, and meditative drumming. What is then utilized to adorn this work includes tranquilizing vocals – with the use of one of my faves, the vocoder, at several points – along with other mind capturing enhancements, of course some electronically generated.

KOMINA capably take the listener on a journey that is both inward and simultaneously outward, one that launches with “Visions Of Pripyat“. The music feels like being on a craft that seems to be hurtling across the infinite celestial, but in actuality is traversing the immeasurable distances within the human mind. It is deep, it is engrossing, and I dare say that you will not be the same after experiencing where this or tracks like “Swallowed Whole“, “Afterneath“, or “Illuminoid” can take you. The latter listed there, “Iluminoid“, is one of my personal favorites, in fact.

What follows it on the album, “[six]“, is also a damned righteous musical mechanism for absolute tripping-balls without the usually required ingestion of some sort of psychedelics. The levels of emotion relayed from our cosmos crossing, the talented-times-three trio on this track alone is a coruscate composition that will vibrate your mind. Throw in “Black Tides” and “Úlfhéðnar” (another favorite of mine) and there you have it, seven songs possessed with the scintillate auricular substance to deliver the goods in a grandest of fashions.

Speaking of, KOMINA themselves have fashioned quite the recorded statement with their initial outing here, but it is you that will have to discover that for yourself. Should you fail in this endeavor, then it shall be to your secret shame that you do, at least at this present time. Don’t be that unenlightened loser, you have the power to change, damn you…  and you can do so now by streaming the Komina S/T album in this review or get over to Bandcamp [LINK] for further streaming / purchase options.