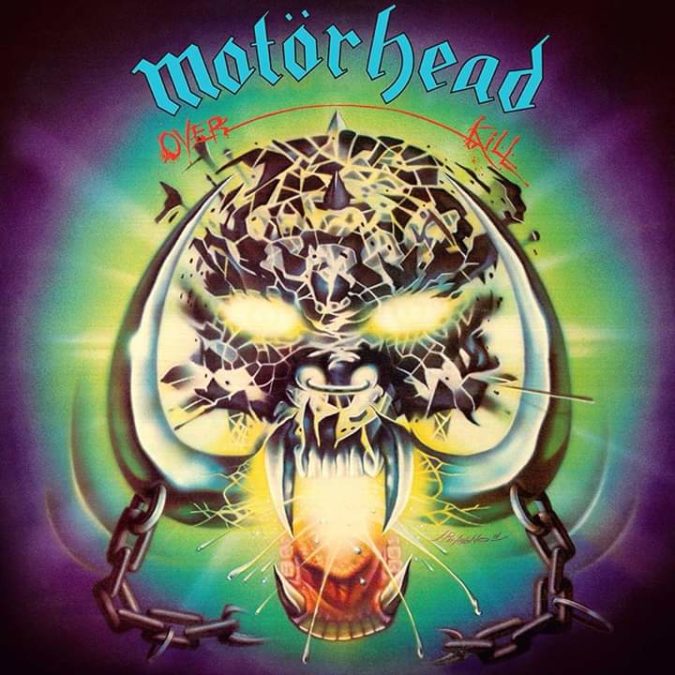 Lemmy Kilmister never had time for screwing around: be it social formalities, small talk, or suffering fools. He was all business, especially when it came time to clock in and deliver the music.

‘Overkill‘, released in 1979, was only the second platter by Motörhead to be unleashed upon the world, but it wasted no time in showing tremendous growth from their snaggletoothed début, the band solidifying its sound and sharpening its attack to a razor’s edge.

The thunderous kick drum pattern that opens the iconic title track inspired an entire heavy metal genre, the unprecedented speed and aggression of the song pointing the way forward for thrash. With Lemmy‘s edgy bass high in the mix, “Fast” Eddie Clarke braces the song with his slashing power chords and shows the potent results that could be achieved by mixing punk and metal music. At its core, this was rock ‘n’ roll though, albeit cranky and cantankerous as a junkie coming off a five-day bender fueled by bathtub speed and Jack Daniels. Come to think of it, I think that was a cornerstone of the band’s rider for most of their career.

“Stay Clean” proves that inspiration can be found anywhere, Lemmy once admitting the germ of the idea behind the song was the Velvet Fog, Mel Tormé (!). The song was hardly an ode to living alcohol or drug-free though (perish the thought), the song more about not being influenced by other people’s bullshit, a Motörhead theme that stayed with them to the end. The next tune, “I Won’t Pay Your Price,” has a similar motif, delivered with more straightforwardness and a shorter fuse. Lemmy lets the offender in question know “You don’t deserve my admiration/ And I’ll sling you out the window/ If you give me aggravation.” Perfectly pithy and comically dismissive.

“Capricorn” takes its title and lyrical inspiration from Lemmy‘s astrological sign, Eddie spitting bluesy wails throughout, giving the listener something different to digest before “No Class” kicks us in the teeth again with its almost ZZ Top-ish swagger and surly lyrics. Finding yourself on Lemmy‘s shit list was an unenviable position to be in, and anyone dumb enough to annoy him was likely to find themselves unceremoniously immortalized in a Motörhead song, hoisted on their own petard.

Continuing the string of soon-to-be-classics, “Damage Case” shuffles out of the alley with its stutter-step groove, cutting guitar solo, and self-aware but unapologetic lyrics, not intending to offend, but at peace with its own nature. The relentless nature of the album is epitomized with the next track, “Tear Ya Down”, drummer “Philthy Animal” Phil Taylor showing just how quickly he had incorporated double kick drum ideas into his playing and placing another weapon in the band’s arsenal.

They were on a roll here and knew it, all the moving parts fully synchronized and the musicians relishing the opportunity for anyone within earshot to be run through the shredder. “Metropolis” remains a live favorite to this day and original album closer “Limb From Limb” is one of Motörhead‘s most underrated tracks, the freight train assault that follows the second verse of “Limb” showing why Metallica and Megadeth were so keen on cribbing notes from Motörhead‘s playbook.

Even the B-sides from these sessions are essential, “Too Late Too Late” another standout, Lemmy‘s patience being tested once again by bullshit artists with more nerve than common sense, “Like a Nightmare” a solidly rocking tune that easily could have made the album if not for the tough competition. And where would a Motörhead album be without a bit of classic ’60s rock, this time with the inspired inclusion of “Louie Louie”? Hearing Lemmy‘s cigarette croak crooning such brilliantly lunk-headed lyrics is too good to be missed.

“Overkill” remains a groundbreaking album, one that still thrills and inspires bands to get together to bash out their own paeans to hedonism and hard living. Motörhead kept up a breakneck pace live and in the studio over the near 35 years that followed this album, but this remains one of their recorded high points.

The legend of Motörhead starts here and there’s no better album to act as your introduction if you haven’t had the pleasure of being injected with their distinct brand of Rock ‘N’ Roll adrenaline.