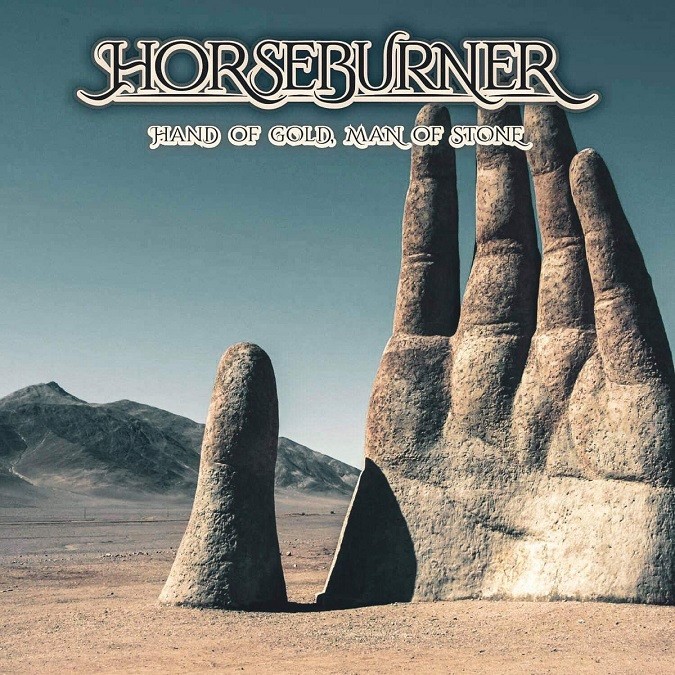 HORSEBURNER. It’s one of those band names that’s simple, yet effective. You remember it, invent possible meanings for it, it forces you to ponder. It sounds mean, loud, subtly reminiscent of chrome horses blazing trails on the asphalt…

Well, it does if you’re into that sort of thing (which I am). HORSEBURNER does indeed blaze rather loud trails on the road. However, they’re some darned nice gentlemen, in fact. About as far from mean as you could fathom. Look at their band photo, for the love of all that’s unholy. How could you not like these doods?

Together since 2008, borne from the wild Appalachian green of West Virginia, HORSEBURNER has never cowered from hard toil. From their first live show performed, a first EP ‘Dirt City’ self-released in 2009, an initial tour in 2011, to a second EP 7” ‘Strange Giant’ in 2013, and right up to a début full-length ‘Dead Seeds, Barren Soil’ in 2016, it’s all been DIY and self-released.

I’ve seen but a mere few out of the hundreds of shows they’ve played over the past decade, alongside such acts as Torche, Weedeater, Skeletonwitch, Goatwhore, Obituary, Corrosion of Conformity, The Obsessed, Karma to Burn, Prong, ASG, and Bell Witch. In 2017, the band altered their DIY stride with a reissue of their full-length through Hellmistress Records and reignited their flame with writing and recording new music during 2018.

HORSEBURNER continues to step up the pace in 2019, with a recent signing with Ripple Music to release their sophomore full-length, ‘The Thief’, later this year. To introduce the upcoming album, the band released an early single off the upcoming album, “Hand of Gold, Man of Stone,” which is streaming below. The band’s reaction to the new venture:

“We are thrilled to finally be putting out new music after almost three years and several member changes, and we can’t wait for people to hear “Hand of Gold, Man of Stone.” It was the first song we finished for this new album, and we think it really sets the tone for what’s to come this summer when the full album is released. It’s loud, it’s aggressive, it’s a little weird… It’s also the shortest song. Brevity has never been our strong suit, but there is a much larger story waiting to be told, and this song is just one chapter. We’re even more excited to be teaming up with Ripple Music for the new record. We love so many bands on their roster, it’s such a well curated label. We’re honored to be joining the Ripple Family, and honestly, that’s what it feels like, a family.”

Some excitement from Todd Severin of Ripple Music:

“It’s not that often that a band comes by and just blows my mind, but Horseburner is one of them. They’re taking the raw soul of stoner and taking it in fresh, exciting new directions. The sky is the limit for where these guys will soar.”

The band has started up a Spring Tour heading through the Northeast U.S. and a date in Canada (with Stonecutters and Ghastly Sound on select dates), as well as appearances at the Grim Reefer Fest in Maryland and the New England Stoner & Doom Festival in Connecticut.

Check out the dates and info below to find a HORSEBURNER show in your town and have a listen (or five) to the new track “Hand of Gold, Man of Stone.”  The song is currently available on Bandcamp as a NYP (Name Your Price) track.

HORSEBURNER also shared some words about the upcoming tour:

“We’re definitely ready to be back on the road, as well. We haven’t been out there as much as we like to this past year, and we’re ready to throw off the rust and see some new faces. We’re hitting a few places for the first time ever, and returning to some old favorites, so this will be a good time.

On top of all that, we’ve got one of our best pals, Nick Burks from Louisville’s Stonecutters, filling in on guitar for the April tour and some of the May dates, it’s going to be killer. Then with Zach’s exit from the band and him doing a handful of farewell shows before he leaves for good… having Zach’s last show with us in Columbus, Ohio in May – ten years from our first ever show, which was also in Columbus – bittersweet is definitely one way to put it.”

*Nick Burks from Stonecutters on Guitar