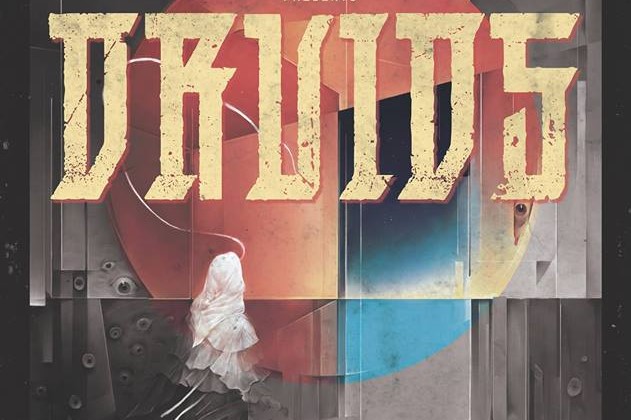 With their infectious blend of aural characteristics similar to such contemporary bands as Mastodon, Bedowyn, and Red Fang, DRUIDS‘ third full-length is purportedly their most ambitious effort yet. Harboring hefty grit and heaping with groove, DRUIDS deliver solid, dense metal offset with captivating atmospheric tinges. (Our review of their 2017 EP release ‘Spirit Compass‘.)

The early word reveals ‘Monument‘ is a conceptually themed record, one telling a surreal story of journeys through the afterlife within its collective songs. With today’s unveiling of the album details, a new single, “Mirrors Of Trigon“, is streaming in the form of an official lyric video. Along with it, we are also including the previously shared track, “The Whip“.

Guitarist and vocalist Luke Rauch shared the following insight to “Mirrors Of Trigon“:

“‘Mirrors Of Trigon’ was definitely the most fun song on Monument to write. We kept coming up with riffs and grooves that we wanted to throw into a song, without making it feel like a nine-minute long song. Keeping things moving and having a solid arrangement were the biggest challenges.

“Lyrically, Mirrors [Of Trigon] is based on a person’s experience when their life is at an end. The person has done something unspeakable and realizes they’re running out of time for redemption.”

DRUIDS ‘Monument‘ will be available on CD, LP, and digital on April 19th, from The Company KC; pre-order is active now at this LINK.

On a related note, DRUIDS will host two album release live events in April, followed by an appearance at 80/35 Music Festival this summer. Here are these scheduled actions: