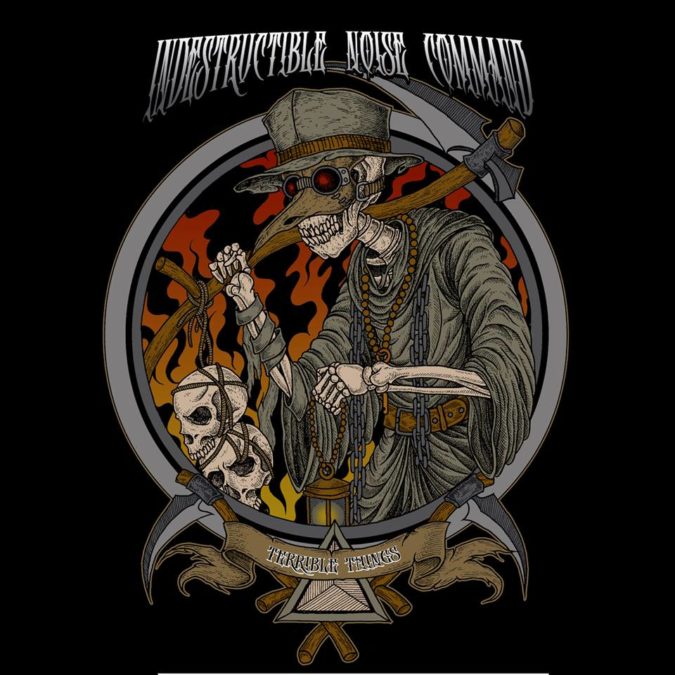 The U.S. metal underground has long been home to the band INDESTRUCTIBLE NOISE COMMAND (INC. for short) since the band first materialized in 1986.

Truth is, some bands are destined to dwell there, but a two-forked path lays before them, one that every band within this concealing realm will be presented with treading at some point. With the way forward not always clearly marked, there exists the following: One is a path of inescapable imprisonment, the kind that occurs when circumstances and fate dictate that band will forever be chained to their subterranean dwelling, steadfastly locked down.

Then two, there is the occasional band that seemingly scans the landscape surrounding them, doing so, and taking all things into consideration to weigh the factors. Whatever their deduction might be, such a band determines not to surrender or submit to circumstances. For me, INDESTRUCTIBLE NOISE COMMAND is the latter type band, for the most part, active since 1986, and never willing to give up or wuss out, no matter what was thrown at them. In all the years they have been at it, INC. has not once turned tail and run or thrown in the towel, but instead have always buckled down and ultimately got the damn job done.

The underground can be a testing field, a proving ground if you will, and for INC. it has always been exactly that, even after the legacy established by means of their earliest releases. It’s true that the band’s first pair of albums, ‘Razorback‘ (1987) and ‘The Visitor‘ (1988), are cult-revered thrash metal milestones now and most rightfully so. Yet with that said, a decision to collectively step back and assess things near the end of the Eighties became a leave of absence all on its own. Eventually, it resulted in a lengthy period of downtime for INDESTRUCTIBLE NOISE COMMAND, over two damned decades, in fact.

They would return though, and in 2010, INC. struck like a bolt of undiluted wrath by means of the ‘Bleed The Line‘ EP. That was followed by two more monumental, savage-intense full-lengths, 2011’s ‘Heaven Sent… Hellbound‘ and 2014’s ‘Black Hearse Serenade‘. Each album from the INC. discography is an uncompromising delivery of razor-sharp guitar riffs and bludgeoning rhythms, with bone-rattling drums, and the uniquely distinct, aggressive vocals narrating each record.

Now, after five years, the man behind those vocals, Dennis Gergely, along with the band’s longtime guitar duo, Erik Barath and Anthony Fabrizi, are fired up and wreaking ‘Terrible Things‘ upon all. Also back for this independently issued outing from INC. is the returning ‘Black Hearse Serenade‘ rhythm section, bassist Dave Campo and drummer Kyle Shepard. Together, this quintet derives purpose from the earlier mentioned components of the heavy metal underground, and just what is that purpose, you ask? Simple, this time around it is a return to the roots of INDESTRUCTIBLE NOISE COMMAND, requiring them to strip things down to the bare essentials. And those, you ask? Once again, simple… craft a record of technically edged, old school style thrash fucking metal!!!

‘Terrible Things‘ is exactly that, with ten songs of extremely volatile, unrelenting metallic savagery and power. Its contents are akin to a barnstorming roller coaster running on vigorously exerted instrumentation and venomously vehement vocals. From the very moment things kick off with the intro cut “Fist-Go-Rek“, a dizzying escapade of guitar antics hit, and they hit hard… again and again, blow after blow.

It does not let up as furiously fast-paced, uptempo salvos of metal thrashing madness with titles like “Identifier” (newly released animated video below), the Slayer-esque moments of “Declaration“, or the tempest of the title track, “Terrible Things“, go for the throat. Their agitated, incendiary contents under pressure come with wave upon wave of wicked, adrenaline enriched energy. It is in the guitars, it is in the drums, it is in the vocals, and it permeates every note, every chord, every lick, and it certainly takes us all to task.

Crazy as it sounds, somehow it feels as if the band manages to shift things into an even higher gear around the mid-way point of the record. “Pledge Of Legions” and “Unscathed” are straight-up shred fests, emitting unmistakable east coast thrash nuances throughout them. Galloping stampedes of intermingled bass lines and propulsive drums just pound and pound away, like a bloodthirsty prizefighter chopping away at their opponent. And while “Unscathed” is a song title, it is, in no way whatsoever, a reference to the state in which a listener will exit this listening experience. Just as the lyrics proclaim: “..Nobody leaves unscathed…”.

There will be symbolic blood, and there will be damage, though we do get a chance for a slight breather at the melodic, slightly out-of-character doom passage that intros my favorite number, “Salmonella“. It is an ominous start to things, to be sure, a foreboding unfurling that, soon enough, launches itself into this weaponized, stand out selection. “Nemesis” arrives next, another song imbued with a very different feel to it, in comparison to the other tracks… not in a bad, or detrimental way, to be clear.

By the time one arrives to this album’s final track, “Devil Of Hearts“, you might be struggling to hold on to this bucking beast but hold fast you should. I say that because I believe that we, the fans of this band, owe it to INDESTRUCTIBLE NOISE COMMAND, as well as the ‘Terrible Things‘ album. Just as they have overcome and persevered, releasing a new album with contents spawned by the struggle to be heard in an over-saturated scene. Where, despite all the obstacles and adversity, INDESTRUCTIBLE NOISE COMMAND is heard loud and clear from their embedded place in the underground.