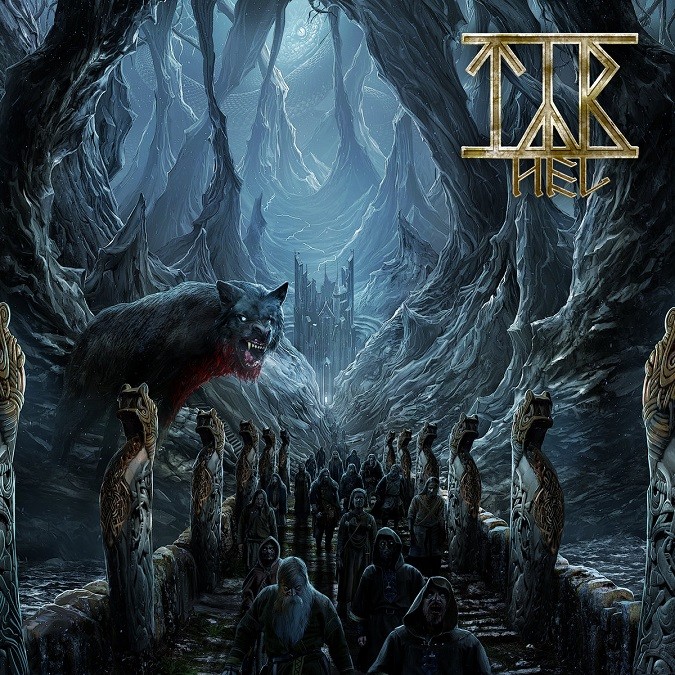 In Norse mythology, Hel is a goddess but also a concept – the idea of where the dead go. It’s not necessarily the same context as Hell in the Judeo-Christian context.

Hel is where the dead who were not killed in battle went – the heroes went to Valhalla. Some may have suffered torment in Hel, but it was really more just a place to go after death. One then might be able to see TYR’s latest, titled ‘Hel,’ as somewhat of a concept album, an exploration of aspects of the end of life, of death, the underworld, and the afterlife.

From the Faroe Islands off the coast of Denmark, TYR is singer and guitarist Heri Joensen, guitarist Attila Voros, bassist Gunnar H. Thomsen, and drummer Tadeusz Rieckmann. They are named for Tyr, the Norse god of war but also of justice.

Joensen’s extensive research and expertise is apparent in his lyrics; his vocabulary is evocative and appropriate to the period. The songs are lush and multi-layered, but concise at the same time. And while each may have similar tempos and structures to one another, they are always exhilarating and explosive.

Both the opening track, “Gates of Hel,” and a later one, “Garmr,” reference the huge dog who guards the gates of Hel, like Cerberus in Greek mythology. The first has Garmr watching hoards of the dead marching forth, set to a soundtrack featuring tons of sparkling, dramatic guitar harmony and Joensen’s death growls in the verses and clean singing in the choruses. The vocal treatment also fixes the moods – foreboding in the verses, extolling the glories of noble battle in the chorus.

“Garmr,” with music a blend of Joensen’s and traditional Danish, almost shows the beast’s purpose at an end and his subsequent anger and frustration: “He is the Helhound, the bloodstained, his heart is hate / Once he was bound here to guard the gate.” This one, too, is all about that bright, blazing guitar sound, precise and complex and perfectly played, and the galloping rhythms.

The stately “All Heroes Fall” seems to tell of a former warrior who sees his time ending – he is looking back on his life, how he has fallen in his station (“in my godliness decay / To thraldom led astray,” as if he has become a slave or been captured). He has done his work and there is peace now, so there is nothing left for him to do. Joensen explores his entire vocal range in the chorus, but it’s a little awkward with the strident singing that opens the chorus going into a slower tempo change at the end.

“Sunset Shore,” too, is an ending of sorts, of drifting off to a better place after you die, like Tir na Nog in Celtic mythology. It’s soothing, almost ballad-like, also telling of a warrior who can’t do anymore (“This one cannot, so it seems / Righteousness restore”). It might be sad and full of regret, but at the same time, the character longs for rest and peace.

“King of Time,” Joensen’s take on traditional Swedish music, shows the band’s deftness at combining the traditional and the modern – it just soars. The track itself really quite profound, continuing the theme of life ending and wondering what might be next. It seems to refer to those times in life when we are too young to die (“Too soon to sail the starry sky”) but maybe too old for new adventures (“And too late to sail out for new land,” couched beautifully in metaphor). Again, it looks back on what has been accomplished and reassures that our lives will be remembered – “A tale of all our days / Will once be the rhyme / The stars up in the sky deliver / To the King of Time.”

The first single from the album, “Fire and Flame,” is an exhilarating tale of despair, if that’s possible, of finding release in the final battle. It can be taken literally, like the warrior who is done fighting, or even figuratively – “standing on the shore, preparing for the war” could be mean dealing with internal strife.

The raging “Against the Gods,” with its stirring opening riff, is wonderfully complex thematically. Ostensibly, it’s about losing faith in the gods (“Not meant for me / Be they truth or lies”), but each pre-chorus (worded slightly differently) might be about the inevitability of time and how its passage smooths things out, makes them less painful, something over which the gods have no control. It’s a thought-provoking concept.

TYR injects a touch of wry humor into the album with the rollicking “Downhill Drunk.” Losing yourself in drink, drowning your sorrows, can be a singular joy in life because sometimes it’s just too hard, after all.

The plodding and thunderous “Empire of the North,” with its sing-along chorus and loads of harmonies, tells of remembering the conquerors as well as the conquered (“And so many fell / We built mounds where they dwell”), all the while understanding that that process made the society what it is (“Without grief or guilt / For descendants they built / Us an Empire of the North”).

Two traditional songs are performed in Faroese. “Ragnars Kvæði” is about the legendary Ragnar Lothbrok of “Vikings” fame. The music too is traditional, with glorious metal additions, done in a chanting, epic style with a rolling, top-heavy rhythm.

“Álvur Kongur” is a fantastical tale of a shipwreck and a life-saving bargain with Odin. Its majestic sound is accented by an epic solo section that fills with tension as the story proceeds. These songs clearly represent what is so wonderful about folk metal – the subgenre keeps these sounds and topics alive for new audiences.

The best part about ‘Hel‘ is that it works on both levels. It’s a blistering metal blast, fast and melodic enough to satisfy the primal part of your brain, yet it is thoughtful and philosophical enough to get and keep you thinking. It mulls on modern themes in a traditional context, showing that questions about life and death and what’s beyond have been, and will be, with us always.