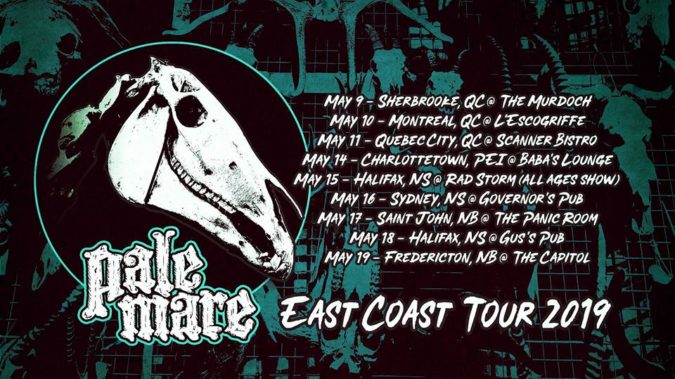 Toronto, Ontario, Canada’s PALE MARE announce they will take their excessively loud, dense, and decimating style of sludge out on the road for a string of live dates in The Great White North next month.

The nine-date trek, dubbed the “East Coast Tour 2019”, will see the trio centering on locales in the eastern regions of Canada. There is a good chance that the guys, James Tulloch (bass), Eytan Gordon (guitars, vocals), and Kevin Richards (drums, vocals), will be performing some material from their upcoming, yet-to-be-detailed new album.

This will be Tulloch’s first extensive touring run with PALE MARE since it was announced earlier this month that band co-founder, bassist and vocalist Tom Gervais, would be stepping away. James Tulloch will make his live début with the band at their Coalition T.O.: Countdown To Extinction appearance in Toronto on Friday, April 19th.

PALE MARE has stated that the upcoming tour will find them performing songs that are quite a “substantial step up from the first effort”, referring to their 2017 self-titled EP (streaming below) released via Medusa Crush Recordings.

“The songs are heavier, louder, groovier, more crushing and they showcase a much more diverse side of the band, where we are able to explore different sonic territory. When we hit the road, fans will get some new sounds to feast on! When fans listen to the music we want to a black hole to tear open in their mind and suck all the mundane dregs of life into the nothingness of the void, and the listener can experience freedom as they surrender to the sheer power and might of the riffs and the music.”

Fans of PALE MARE will get a chance to experience exactly that when the guys take to the stage at the tour stops below.