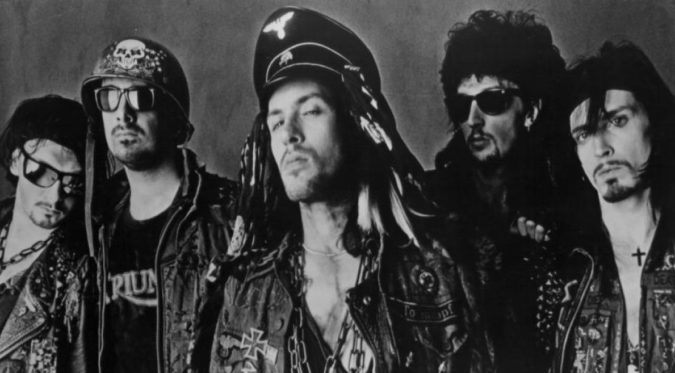 It was March 25th, 1988, and Night Flight, a weekend, late night, visual arts and variety show on television’s USA Network, was about to show viewers something entirely different… and they would never be the same.

It was, of course, the age of the music video, and this program was on the verge of airing one entitled “Prime Mover” from the British sleaze rock act, ZODIAC MINDWARP AND THE LOVE REACTION. The “Prime Mover” number was musically inspired by the U.K. space rock collective Hawkwind’s 1977 track “Quark, Strangeness And Charm“, with its video directed by Adrian “Ade” Edmondson of “The Young Ones” fame. Ultimately, neither one of these facts would mean much of anything when people got an eyeful of this leather-clad band and then heard their music. Yes, it was the latter that they were going to hopefully find most impressive… or altogether hate.

Mark Manning was a graphic artist at the time and former art editor at the then-defunct Flexipop! Magazine, which folded in 1982. It was while working there that Manning was introduced to a frequently visiting flow of rock stars and their hedonistically decadent lifestyles… and he wanted in. It would be a few years still, but soon enough Manning was working as a graphic designer at another publication, Metal Fury, when he began to undergo a transformation.

The change was taking place during his off hours from work, with Manning experiencing an evolutionary-like leap (perhaps a devolution in some eyes) on the scale of characters from Robert Louis Stevenson’s literary work, Dr. Jekyll and Mr. Hyde. Much like that strange case, Mark assumed an alter ego persona, that of Zodiac Mindwarp – an anti-social looking sort, like a greasy biker from the cast of some forgotten ’70s exploitative B-movie. What he was and what he had become, was something that really surprised no one that had known Manning for any length of time and he soon aligned himself with similar like-minded outcasts.

ZODIAC MINDWARP AND THE LOVE REACTION was officially given life in 1985, joining Zed (as he is known to his friends) in the band were guitarist Rockman Rock (aka Jimmy Cauty), bassist Kid Chaos (aka Stephen Harris), and drummer Boom Boom Kaboomski (real name unavailable). The latter part of the band’s name was culled from the most unlikeliest of sources, but there it was in the lyrics of the third verse of The Boss’ “Dancing In The Dark“.

Soon the band was signed to a Phonogram Records subsidiary the Food label and 1986 would be the year that ZODIAC MINDWARP AND THE LOVE REACTION begin their campaign to dominate rock ‘n roll. It began in May that year, with the “Wild Child” single,  recorded with Zodiac on vocals and guitar, Kid Chaos on bass, and Jake Le Mesurier on drums. The band’s name had already become a thing of high praise and acclaim among the denizens of the “Grebo” movement (or “Grebo rock”), a British musical subgenre incorporating influences from punk rock, electronic dance music, hip hop, and psychedelia.

Though ZODIAC MINDWARP AND THE LOVE REACTION looked the part of the term’s earliest intended targets, as the word “grebo” was originally used as a slang term for bikers and rock music fans with long hair, the word was being re-fashioned to a “cleaner” look by the group Pop Will Eat Itself in 1986. They used it in song titles and soon it became a thing unto itself, a music genre sublet that in time would include such acts as Ned’s Atomic Dustbin, The Wonder Stuff, Scum Pups, Jesus Jones, and Gaye Bykers On Acid. Before ’86 is over,  ZODIAC MINDWARP AND THE LOVE REACTION released the ‘High Priest Of Love‘ EP, which soon landed in the #1 spot of the U.K. Indie Chart.

Truth is, ZODIAC MINDWARP AND THE LOVE REACTION were pretty much the antitheses of the new Grebo look, a polar opposite to its colorful shorts and clean shaves. Zed & Co. opted for a more psychedelic, drug-addled, Mad Max-ian appearance, melded with the crosses, skulls, black leather, and sometimes even stormtrooper helmets.

By the end of 1986, ZODIAC MINDWARP AND THE LOVE REACTION played the U.K.’s packed Reading Festival before thousands of fans. Not bad for a band that had their first gig at the 500-capacity Dingwalls in London less than a year before. Yes, it was evident that the band’s misanthropic imagery was not having an anti-social effect whatsoever, and even more intriguing, their music and its lyrical contents were finding an audience. Chock full of flamboyant, chest-thumping proclamations derived from a raging libido, Mindwarp’s tongue-in-cheek ravings are pure camp, despite their often lascivious and misogynist tone.

However, for any British band, there is only one thing that seems to equate as having “made it” or being successful. That is acceptance across the pond, in the United States. In February of 1988, ZODIAC MINDWARP AND THE LOVE REACTION released their first full-length album, ‘Tattooed Beat Messiah‘, through the Vertigo label, another subsidiary of Phonogram. The album had remixed versions of the singles released the previous year, alongside several new songs, including a cover of the Steppenwolf classic, “Born To Be Wild“, in some markets.

The album exploded in a music scene being dominated by acts like Poison and Bon Jovi, but true anti-authoritarian types knew the deal. ‘Tattooed Beat Messiah‘ was the dividing line where such horrid pop fluff shall not pass, and it spawned several subsequent video tie-ins to tracks like “Backseat Education“, “Planet Girl“, and of course, “Prime Mover“.

Ultimately, it had the desired outcome, as ZODIAC MINDWARP AND THE LOVE REACTION were placed on a 1988 U.S. tour bill alongside Guns & Roses, supporting Alice Cooper. After just a few dates, ZODIAC MINDWARP AND THE LOVE REACTION were bumped up on the roster, now playing after Guns & Roses, before Alice Cooper. Several of the band members appeared with Slash, Axl Rose, and Alice Cooper in a performance of Cooper’s “Under My Wheels” for the feature film music documentary, “The Decline Of Western Civilization: Part II“.

Tours with Motörhead and Iron Maiden only served to increase the frenzy about the band, which grew like a raging wildfire. Soon, they were designated part of the new rock royalty, placing them in the ranks of bands like Circus Of Power, Warrior Soul, and Monster Magnet.

Yet, for every high there is a low; for every climb, a descent; and somehow, someway, ZODIAC MINDWARP AND THE LOVE REACTION were about to experience theirs. At some point in all of this, the band was informed that ‘Tattooed Beat Messiah’ failed to sell well in the United States. This resulted in them being dropped by their record label, while burdened with large, outstanding debts. It didn’t add up, literally, as the album had ignited like a fuse, spawning five official videos that received regular rotation airplay on MTV, and the channel’s “Headbangers Ball“. That show’s host, Ricki Rachtman, claimed the band as one of his all-time favorites and one of the most underrated bands of the era.

Not ready to give up the ghost yet, ZODIAC MINDWARP AND THE LOVE REACTION released a sophomore album, ‘Hoodlum Thunder‘, through the only label that would seemingly sign them at that point, Musidisc. Despite critical acclaim for the album, there was no hysterical fanfare this time, no arenas to rock, yet it’s probably a safe bet that some groupies still thronged the band. The album spawned a handful of singles including “Elvis Died For You” and “Meanstreak“, with one of its cuts, “Feed My Frankenstein“, ending up being re-recorded by Alice Cooper, and released on his 1991 ‘Hey Stoopid’ album (and featured in the 1992 movie Wayne’s World).

Truth is, things would never quite be the same for ZODIAC MINDWARP AND THE LOVE REACTION, as they increasingly cycled through a revolving door of musicians. This included bassists Suzi X, Tex Diablo, and Kev Reverb, along with such drummers as Robbie Vom and The Apocalypse. They continued to release consistent output like ‘Live At Reading‘, ‘My Life Story‘, and ‘One More Knife’, but the band eventually went on a hiatus, remaining inactive for a decade before resurfacing again around 2002.

‘I Am Rock‘ arrived that year, another live album, with ‘Weapons Of Mass Destruction‘ in 2004, ‘Rock Savage‘ in 2005, and the following year, 2006 brought ‘Pandora’s Grisly Handbag’, a 1986 live album and DVD pairing. Through all of this, the persona and over-the-top character that is Zodiac Mindwarp never diluted nor sought a PG rating. The dangerously deranged, gargantuan genius of Mark Manning continued to expand, authoring multiple books containing memoirs about his sordid sex, drugs, and rock ‘n’ roll experiences simultaneously as the band issued albums.

2010’s ‘We Are Volsung‘ album, featuring the cast of Zodiac Mindwarp with guitarist Cobalt Stargazer, bassist Jack Shitt, and drummer Bruno ‘The Cat’ Agua, was released via SPV/Steamhammer. Recently, the current edition of ZODIAC MINDWARP AND THE LOVE REACTION featuring Z and Cobalt, Beast Of Ante (bass), and the returned Robbie Vom (drums), had toured in celebration of the 30th anniversary of the ‘Tattooed Beat Messiah’ release.

When all is said and done, the larger than life cosmic rock deity that was Zodiac Mindwarp, as well as his more human alter ego, Mark Manning, will be a subject regaled across the infinite celestial. Tales, legends, and mythologies, if not entire theologies, will be devoted to the praise and edification of the Tattooed Beat Messiah. You know, the “Christ in shades“, the “napalm god“, the “Sex führer, baby”, the “love dictator… living detonator“- Mister Prime Mover himself.