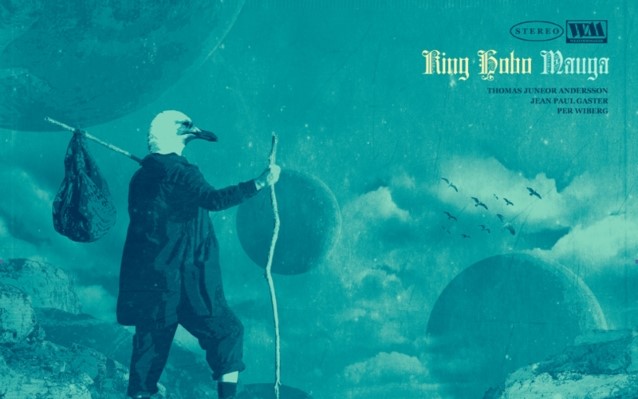 KING HOBO, the transatlantic trio with members of Clutch, Spiritual Beggars, and Kamchatka break a lengthy period of silence with their first new music since 2008.

The band features Jean-Paul Gaster on drums, Per Wilberg on vocals, bass, and keys, and Thomas Juneor Andersson on vocals, guitars, and percussion. Together, they recently announced ‘Mauga‘, the long-awaited follow-up to the self-titled début they released 11 years ago, is set to arrive May 31st from Weathermaker Music. The news came as a precursor to the sharing of the first single from the album, the opening track, “Hobo Ride“.

Two other songs are set to follow, with “Listen Here” on May 3rd and “Dragon’s Tail” on May 17th. Today’s track is accompanied by details on the upcoming ‘Mauga’, including the record’s tracklist and album artwork, which was designed by Per Wilberg himself. He comments:

“I wanted to pay homage to all the great labels that inspired the music we play, like Chess, Atlantic, Vee-Jay, Prestige, and Blue Note, for example. All these labels had a classy design in their heyday which was immediately recognizable. That’s why our image is in tri-tone, and the names of the band members together with the label and stereo logo are mentioned on the front cover. The sci-fi imagery is our little twist.“

The ‘Mauga‘ record was produced by Tobias Strandvik and recorded at his studio in Varberg, Sweden. Weathermaker Music will release a limited 12-inch LP in a gatefold format which has been autographed by the three musicians on the inner sleeve, and a digital 10-track version that includes the song “New Or-sa-leans” as a bonus.

Wilberg offered the following insights about the recording of “Mauga” saying:

“We recorded this album the same way as the first, live in the rehearsal room. It’s quite a liberating process compared to how a lot of albums are recorded these days. We set up our gear in a circle and go full on, no headphones or screens to seal off the amps or drums. We jam all through the day to see what we come up with, arrange it on the spot and record. I really like the fact that it doesn’t feel like a regular recording situation with monitors, click tracks and whatnot. It feels a lot more exclusive and kinda like a proper gig actually, plus we don’t have to worry what it’s gonna sound like live either, ’cause this is live in the raw! The hang-out part and easygoing vibe adds a lot to how we play together as well and none of this would happen if we didn’t have a guy we trusted in the studio. Toby Strandvik did a tremendous job this time with the technical side of things as this way of recording might not be an engineer’s wet dream, so to speak. The journey is just as much worth as the destination to us and I think we found the HOBO way of capturing the moment.“

* Bonus track on the digital release only

Check out the new single “Hobo Ride” below, as ‘Mauga‘ arrives May 31st from Weathermaker Music.

In related news, Per Wilberg is also preparing to release his new solo album, ‘Head Without Eyes‘, next month – find out more about that HERE.