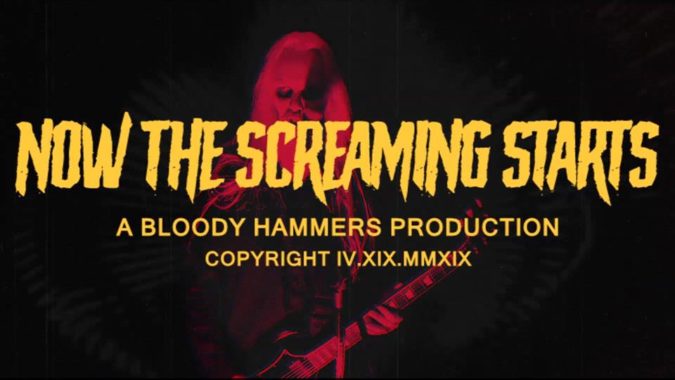 Halloween will arrive early this year as the sinister horror rock duo BLOODY HAMMERS are set to deliver their fifth studio album, entitled ‘The Summoning‘, on June 26th via Napalm Records.

The wicked pair of occult rockers that comprise BLOODY HAMMERS – Anders Manga (vocals, guitar, bass) and Devallia (keyboards, organ) – reveal the new opus pays horrific homage to classic flicks like “Let Sleeping Corpses Lie” (1974) and “Now The Screaming Starts” (1973). The latter is of special significance, serving to inspire the first single, and official video, from the upcoming album, one that shares its name, “Now The Screaming Starts“.

“When I was thinking about my approach for the “Now The Screaming Starts” video, I just happened to be watching some classic movie trailers. The trailer for ‘The Night Evelyn Came Out Of The Grave’ and some other classic Giallo slashers got me inspired to go for that high contrast, color washed look. I think I accomplished it and we’re really stoked on the vibe of it now.

The song was originally inspired by the Amicus Productions film, “And Now The Screaming Starts!” from the early 70s but it eventually took on its own narrative about a narcissistic killer who’s being haunted by his past victims. It all comes together in the video… BUT.. please Don’t Watch It Alone!!! …or at least have a nurse present. Up the Hammers!”

The music of BLOODY HAMMERS is an enthralling affair created by heaping doses of gothic rock with heavy doom riffs, embellished with Devallia’s psychedelic keyboards for otherworldly flare. For the musical contents of the new recording, unusual infusions of accelerated tempos were used, something not explored much on previous outings. With those came concise elements of an epic metallic nature, resulting in songs with some of the heaviest edges yet for the band.

01. Let Sleeping Corpses Lie
02. Now The Screaming Starts
03. The Summoning
04. Fire In The Dark
05. The Beast Is Coming Out
06. Welcome To Darkness
07. Tales That Witness Madness
08. Condemned, The Prisoner
09. From Beyond The Grave
10. Unbreakable

Check out the “Now the Screaming Starts” video below, along with ‘The Summoning‘ album details. Arriving in the following formats from Napalm Records on June 26th, you can pre-order your copy now at this LINK.