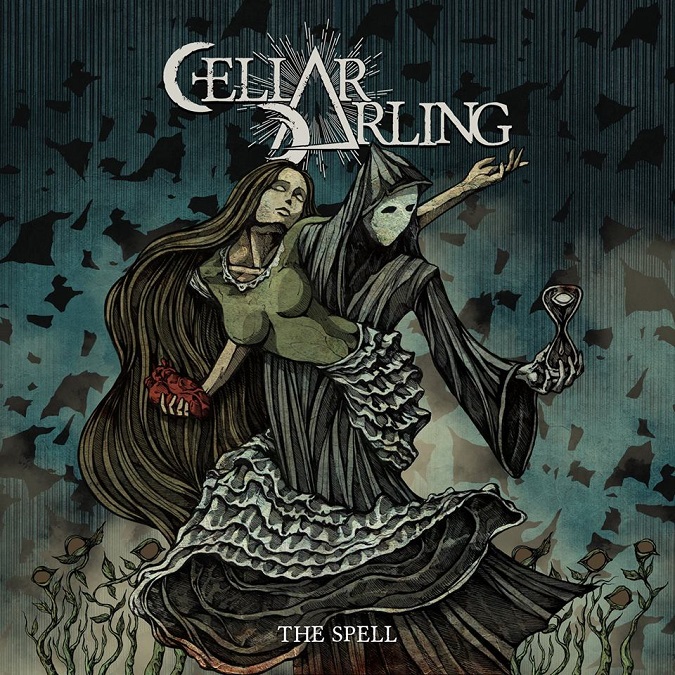 Bands by nature have ambition – they have to or they’d get nothing done. The Swiss trio CELLAR DARLING – singer Anna Murphy, guitarist and bassist Ivo Henzi, and drummer Merlin Sutter – has taken the mere ambition to do something new to new heights.

Not only did they have the ambition to do a concept record – their sophomore release, the simply stunning ‘The Spell‘ – they based that concept record on source material.

Not only did they have the ambition to do a concept record based on that old source material, but they also took that source material and turned it completely on its ear by changing the perspective, and then used each track to further flesh out the story.

Not only did they have the ambition to do a concept record based on source material, they continued the concept into not only a written synopsis of the story (included in the liner notes) but had a visual artist, Costin Chioreanu, turn the concept into pieces of art that accompany each track.

And not only did they have the ambition to do all that, but they also managed to throw open all the doors of the metal genre and firmly establish a sound all their own. This is the magnitude of what CELLAR DARLING has done with “The Spell.” In the original text, the Maiden rebuffs Death’s advances in terror. But CELLAR DARLING’s Maiden is a vulnerable, wretched, fatherless soul, born from a devastated and pain-wracked Earth.

The opening track, “Pain,” describes her genesis in a subtly couched commentary on climate devastation. So when Death introduces himself in the track named for him, he is a sly, knowing tempter, luring the Maiden to find freedom from her agony and planting irresistible bait at the song’s end. And she takes it in “Love,” proclaiming her devotion to Death and turning his plan on him – now she is the seducer, surprising Death and forcing his hand.

The title track is his solution, the pivot point of the story, and the master gets the advantage once again. Set to a gorgeous, Middle Eastern-tinged melody with an odd, erratic rhythm, Death reminds us, “From roots to moons / We are the same” – from beginning to end, he says, I am with you.

So as the Maiden deals with her fate, the following songs – including “Burn,” “Hang,” and “Freeze,” all ways in which she tries to get Death’s attention – become an allegory for the things we do to each other in relationships. We manipulate, we strive to get the other to notice us, we sacrifice ourselves for the other – we “kill” ourselves. The “Death and the Maiden” story is merely CELLAR DARLING’s unique way of getting into that concept.

The first single released from the album, the pounding, soaring, psychotic “Insomnia,” shows that even sleep and the peace of dreaming oblivion is closed to the Maiden and she is locked in madness. The defiant chorus is a deeply moving cry for release and is arguably the album’s high point.

While Death here is of course an unsavory sort, the Maiden isn’t much better, buried in self-absorption in her dramatic efforts to win him back. But there are moments where she sees beyond herself, glimmers of hope that she might just make it after all. There is a beautiful moment in “Hang” where, while hanging from a tree, she notices a bird with a broken wing – her healing of the creature is a metaphor for what might be the beginning of her own healing.

And in the dreamy “Fall,” she poses questions to which we can all relate – don’t we all long for release from pain? (“Aren’t we all too heavy for the world?” “Don’t we all just seek the void?”) “Drown,” the album’s longest track, is her final attempt, the intense climax of the story, the sway of the music echoing the endless in and out of the sea and symbolizing her seemingly endless quest.

“Love Pt. II” begins with a brutal image that again proves fruitless, but it ends with the Maiden finally having her epiphany – the light of hope found in nature. Death, as is always the case, has the final say, though – “I’m inevitable for you and everyone,” after all. But is this a tragic ending? Did he snatch life from her just as she finds a reason to live? Is this his cruel joke, or was this her intention all along, to lure him with her perfect suffering? Is either scenario salvation? The ending is perfectly, wonderfully ambiguous, and poses more questions than it answers, exactly the way a story of this depth should conclude.

And all this is accomplished in tracks averaging around 5 minutes – no self-indulgence, no belaboring the point.

The music on ‘The Spell‘ is Sabbath-heavy, dirge-like, doomy, sinister, ethereal, and delicate all at once. Murphy’s fluid yet oddly percussive hurdy-gurdy adds heft and depth, intensifying the heaviness and giving that undefinable element that is CELLAR DARLING’s essence. She sometimes plays alongside the guitar, as in “Drown,” or adds her skill on often-atonal piano and flute to provide occasional moments of reflection or emphasize plot points.

“Love,” set to a waltz tempo, is laden with classical elements, bouncing back and forth from daintiness to thunder. ”Burn” is almost psychedelic, with a fantastic groove and moments of soaring melody. “Sleep” is a sparse piano ballad, Murphy barely singing between spacey effects, ending with an afterthought of acoustic guitar and harsh low-end piano notes.

And Murphy’s voice is an elastic wonder, varying between delirious high notes (like in “Insomnia”) and a rich lower register (as in “Death”), or between both in a dizzying display, like in “Freeze.”

When she sings from Death’s perspective in the final track, “Death Pt. II,” she is soothing and threatening at once, like an evil lullaby. Her voice is world-weary and resigned, perfectly solidifying the ending’s ambiguity.

All told, ‘The Spell‘ is a masterpiece. That might be an overused term for not-as-deserving material, but this is an album that will be referred to in the same breath as ‘The Wall‘ and ‘Operation: Mindcrime‘ someday. It’s that good and breaks that kind of new ground.