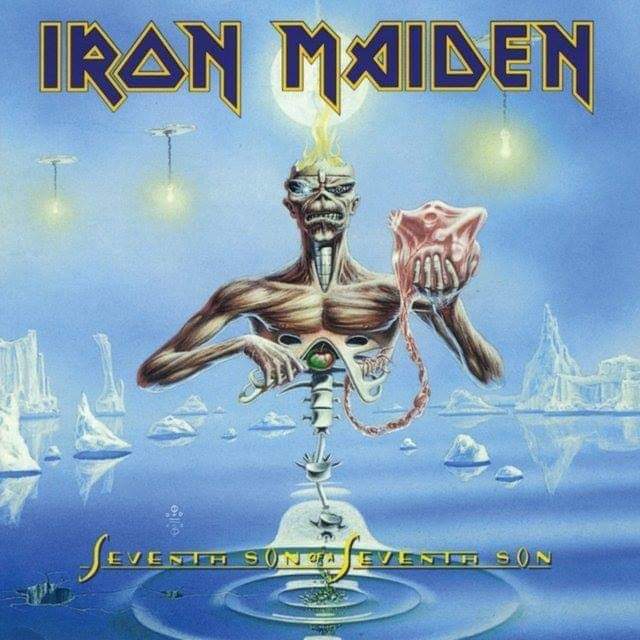 All musical forms go through periods of change and upheaval, and traditional heavy metal was in a particularly weird state of flux in 1988 – thrash was shifting the tastes of many fans towards the more extreme side of things, death metal being the biggest beneficiary of this newfound open-mindedness and hunger for even more vicious sounds.

Meanwhile, perennial artists like Kiss, Scorpions, and Ozzy Osbourne were looking to cash in on the glam metal sweepstakes that was paying off mightily in platinum sales and MTV airplay, if not lasting artistic relevance. It was in this vexing environment that the staunchly old-school IRON MAIDEN released their seventh album entitled (cheeky buggers) ‘Seventh Son of a Seventh Son‘.

Doubling down on the previously verboten notion of using keyboards, IRON MAIDEN starts off the album with folksy acoustic guitar strumming AND those dreaded purveyors of all things antithetical to heavy metal. After his mental sabbatical during the ‘Somewhere in Time‘ sessions, singer Bruce Dickinson returns somewhat rejuvenated here, and the album is filled to the brim with the type of theatrical vocalizing that had set IRON MAIDEN apart from other bands since his arrival. Steve Harris‘ literary, larger-than-life themes and songwriting prowess being the other huge distinguishing factor. But here, he has ample help from both Dickinson and guitarist Adrian Smith, the expanded writing team giving the album even more variety and scope than usual.

The opening synthesizer tones of “Moonchild” are set against crashing power chords and cymbals, creating an almost “Baba O’Riley” grandness that suited them well, given the subject matter. An underlying darkness had always played a part in IRON MAIDEN‘s music, but the visceral punch of lyrics like “Don’t you dare to save your son / Kill him now / and save the young ones / Be the mother of a birth-strangled babe / Be the Devil’s own / Lucifer’s my name” impart an atmosphere of impending doom that looms over the entire album.

Often considered the beginning of IRON MAIDEN‘s “prog” phase that largely carries on to this day, I would argue that this was the last album where the balance between concise song structures and extended instrumental suites was in perfect harmony. Not that there isn’t much to admire in modern Maiden, but ‘Seventh Son’ was the last album where instant gratification was the name of the game, despite the low-key subjugation of guitar riffs in service of melody and catchy choruses.

“Infinite Dreams” is almost ballad-like in its quiet early moments, the smooth harmonies and Hendrixian guitar parts of Smith and Dave Murray delicately parrying with Harris‘ agile bass fills. The song quickly gains steam, Dickinson belting out the words as only he can, the protagonist of the song full of questions, knowing his very soul may depend on the answers. The churning bass riffs that surface near the halfway point of our journey give us another chance to drink in Harris’ powerful bass presence, the click-clack of his Fender Precision almost overpowering TWO of metal’s most engaging axemen. But, as Stephen King once wrote, “Fun is fun, and done is done”, so it’s only fair that the guitarists get the chance to stretch their fingers with a bevy of dual harmonies and searing lead breaks that once again show the duo’s penchant for a little friendly competition without undermining the composition’s central thrust and tone.

The next song may pose the question “Can I Play With Madness?”, but the query I’m always left with is “Can anyone besides Maiden (okay, Priest too) possibly craft such inescapable earworms that are simultaneously catchy yet singular enough to stand apart from the hordes of imitators that followed?” Many a Maiden fan balked at the song, but I latched onto it immediately, Dickinson‘s astounding vocal gymnastics impressing as always, the cracking machine gun fire of Nicko McBrain’s snare strafing the guitar riffs exquisitely.

It was another perfect radio song in a long line of them in IRON MAIDEN‘s catalog, and once again it was largely met with indifference from radio programmers, not that it mattered to the faithful. It was short and sweet, Smith showing his ability to crank out songs that were all hook, devoid of excess or the progressive trappings that the band hangs its hat on these days. Don’t let me be misunderstood – the post-reunion era of IRON MAIDEN is fantastic in its own way, but the succinct joy of a well-placed “hit” song in an album’s tracklisting makes for a better flow and easier assimilation, something lost on far too many modern metal acts.

“The Evil That Men Do” is another one of the album’s most enduring songs, the mournful guitar melodies that open the track soon overtaken by the barely controlled turbulence leading into the first verse. Dickinson‘s vocals shift between the heartfelt and the malevolent, and lines like “But I will pray for her / I will call her name out loud / I would bleed for her / If I could only see her now” are oddly touching. The simplicity of the chorus – one line repeated four times in a row – would sink the efforts of a lesser singer, but Dickinson‘s subtle changes with each repeat make it more compelling, not monotonous.

The epic title track swells powerfully during its intro, the groove ushering us through the first verse towards the soaring chorus, soccer stadium chants bringing up the rear. It’s at this point that the band begins to focus on furthering the narrative, rather than the broad strokes that inform the first half of the album. The titular character attempts to warn the townsfolk of the coming tragedy, to no avail. The articulate opening guitars of “The Prophecy” set us at ease before the rug is pulled out from under us with the twisted tangle of notes that flip the script from heaven to hell in the blink of an eye.

The rollicking/roiling bass that sets “The Clairvoyant” into motion may not be uncommon for the band, but for metal music, it was a happy anomaly that gave IRON MAIDEN yet another trait that set the band apart from their peers. For many metal bands, the bass was often relegated to the shadows, like unfortunate children – ”Better off seen and not heard”- but Harris was adamant from the band’s inception that he wouldn’t be taking a back seat to anyone. The captivating melodies that spring up from the groove are unlike anything other bands of the era were attempting, IRON MAIDEN trading in the clunky block chords of many metal acts for the elegance of melodies that were both evocative and electrifying.

Closer “Only the Good Die Young” takes many of the characteristics of earlier songs in the album’s running time and presents a stunning summation in another breathtaking chorus, the opening lyrics of “Moonchild” returning for their curtain call to show the resilience and sad inevitability of evil in the world.

This was the last in a magnificent run of albums with the classic lineup, Adrian leaving after the ensuing tour, with Bruce soon to follow. After the mostly unsatisfying Blaze Bayley years, the band’s miraculous output, since the return of Smith and Dickinson in 2000, has exceeded most fan’s wildest expectations, but it’s on albums like this that their unyielding legacy was built upon.

Buy the ‘Seventh Son Of A Seventh Son‘ album HERE.