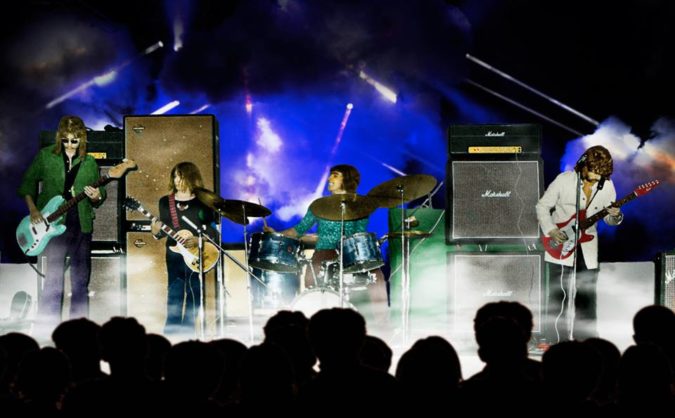 As music fans, each of us has at least one, but more than likely a few, holy grail type recordings we are always seeking to obtain and add to our private collections, right?

I know I have several myself, albums that are either needed to complete a discography of a particular band, perhaps something that holds sentimental significance to us, or just something that is ultra freaking rare.

In time, today’s subjects, rock band DARK from Northampton, U.K., would create something that falls into the third category above. More on that in a moment, so let’s start near the end of a decade as the Sixties are winding down. It was 1968 and a 15-year-old guitarist, Steve Giles, had started DARK, a band including bassist Bruce Duncan and drummer Charlie Hiams. The following year, the roster of DARK slightly changed with the addition of keyboardist Martin Moloney but change would continue for the foreseeable future of the band.

Bruce and Charlie exited DARK in late 1970 and were soon replaced with Carl Bush (bass) and Clive Thorneycroft (drums) in early 1971. The defections were not quite yet over as Moloney soon left as well, returning the band to a trio. Things stayed as such for the remainder of that year but the musical chairs were not quite finished as bassist Ronald Johnson soon replaced Bush, followed by Martin Weaver (guitar; ex-Wicked Lady) coming aboard in May 1972. This was the quartet that began to gel as DARK got more fully underway, creating and playing heavy, prog-influenced fuzz rock with psychedelic nuances.

Financed by Steve Giles, the band entered S.I.S. Recording Studio LTD. between July 9th – 13th, 1972, and recorded their début album, ‘Dark Round The Edges.’ Giles also produced the album, while Alan Bowley served as the recording engineer. The album was limited to 64 copies which were then mostly distributed privately to family and close friends of the band, with only a few of the records ever making it into retail circles. Giles, who also handled the photography and design for the album’s packaging, later revealed the different total versions made included 12 color gatefolds, two “special” color gatefolds, one white “doodle on sleeve”, 12 black and white gatefolds, and 37 black and white single sleeves.

‘Dark Round The Edges‘ contains six tracks of murky, thickly fuzzed-out guitars amid richly acidic, electrified blues music. Lengthy stretches of muscular instrumentation yield to melodic, lysergic tranquility and compelling moments of improvised-feeling funk. There is the chunky jazz of the lead-in number, “Darkside“, or the swaying Led Zeppelin-like feel of “Maypole” and “Live For Today“. From there, the stomping progressive workout of “R.C.8” comes with the quirky sound effects of bells ringing and toilets flushing, while the brisk flash of “The Cat” is sweltering at times. Without question, the grittiest audio arrives with the gear jamming proto-metal of the record closing “Zero Time“, an aggressive, no-holds-barred delivery sure to impress.

If a layman’s description is needed to relay an idea of what this album might sound like to someone that’s never heard it, perhaps “Cream-meets-Jefferson Airplane-meets-Santana” meets that need. DARK disbanded not long after the ‘Dark Round The Edges‘ album was produced and, considering the records that major labels did put out in the ’70s, it’s hard to say why DARK never received a deal. Speaking of deals, it would be more likely for someone to draw blood from a stone than to find a good deal on the purchase of an existing copy of ‘Dark Round The Edges’.

As the decades passed and the legendary mythos of the album exponentially increased, it grew to become one of the most coveted items in the world of music. By the start of this current decade, only two LPs and one jacket have come up on the collectors’ market, making ‘Dark Round The Edges‘ one of the rarest LPs ever pressed in the U.K. As one of the most collectible records in the world, original copies have sold for prices ranging from $7,750.00 to $32,300.00 U.S. dollars. In 2016, it was listed as the 17th most valuable record of all time by the NME (New Musical Express), a British music website and former magazine that has been published since 1952. It was the first British paper to include a singles chart, while in the 1970’s it became the best-selling British music newspaper.

The album has been reissued several times on vinyl and CD, some legitimately (long out-of-print) and others on the shady grey, “unofficial” market. However, in 2013, Portland, Oregon’s Machu Picchu LTD. enlisted Warren Defever to remaster the record, pressing it to high-quality vinyl. Steve Giles, Ron Johnson, and Clive Thorneycroft were contacted to officially license the record and compiled exhaustive liner notes included in the stunning, fully authorized vinyl and CD reissues of ‘Dark Round The Edges‘ with an expanded booklet and additional photographs.

In 1992, Giles & Co. reunited and began rehearsing after some of the guys had not played an instrument in years. Eventually, they were playing live again, going on to record a sophomore album in 1995, ‘Anonymous Days‘. Like its predecessor, this album did not catch on when it was recorded. Who knows what status it may hold twenty years from now?